Deutsch Does Travel In Trump Circles 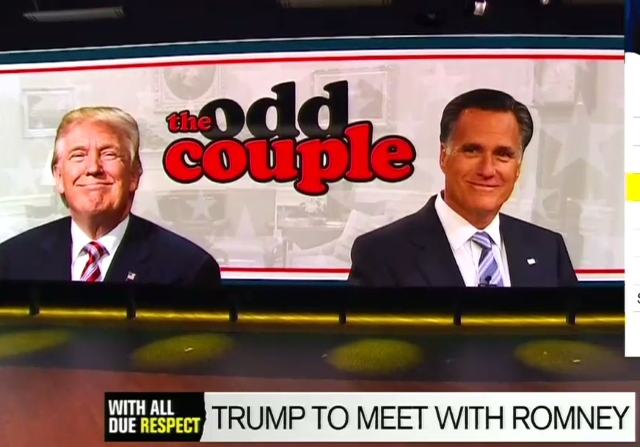 Say what you will about Donny Deutsch, but the man-about-Manhattan and the Hamptons moves in the Trump social circle and is well-connected there.

So attention must be paid to Deutsch’s declaration on today’s With All Due Respect. Asked by Mark Halperin whether the talk about Romney being considered for Secretary of State is “real, whether Romney might end up with the job,” Deutsch responded: “somebody very, very, very high up in the inner [Trump] circle yesterday told me it was very, very real,” and that this person was “very excited about it.”

Halperin prefaced his question to Deutsch by mentioning that that the prospect of Romney as Secretary of State has been met with very favorable reactions. That might be a kiss of death among conservatives, but the fact is that Romney has demonstrated a good understanding of the opportunities and threats facing America around the world.

MARK HALPERIN: Twenty-four hours ago, we talked on this program about Donald Trump’s planned tete-a-tete with Mitt Romney this weekend. The meeting is on. Several sources say that this is not just for show and it’s going to be a serious discussion about a possible cabinet position, Secretary of State’s most often mentioned for the former Republican presidential nominee. So far, the reaction to the prospect of Romney as Secretary of State has been met with very favorable views, including from Capitol Hill, though one source told me today that this meeting is in fact just for show. I’m not sure at this point where it really stands, but as I said, the reactions to the prospect have been positive, so Donny, what’s your gut on whether this is real, whether Romney might end up with the job?

DONNY DEUTSCH: Somebody very, very, very high up in the inner [Trump] circle yesterday told me it was very, very real. They were very excited about it. They were one of the people very behind it. Look, we talked about this yesterday. This would be such a tremendous gesture, it would put so many people at ease.

Just as I predicted! Oh no wait, I had Khloe Kardashian for Secretary of State and Mitt Romney for Treasury.

Can you imagine how many heads would explode if Trump nominated Bernie Sanders to something like Commerce Secretary? (And Vermont’s newly-sworn-in Republican Governor would be appointing his replacement…)

He already did that thing. Michael Flynn is a life-long Democrat – who, BTW, has not been vetted regarding his association with high-level members of the Putin regime supposedly doing business with his consulting firm.

Seems foolish of Trump to open the door to someone who will throw hi under the bus the first time they disagree. Romney will think he’s in charge.

What I really like is that Trump continues to whipsaw the press. They don’t know whether to sh*t or go blind.

I like the Romney / Sanders thoughts if this is true:

Mattis would be great at SecDef. Sic’em Mad Dog!

You’re watching the wrong channel. Tucker Carlson just gutted like a dead fish a scribbler for “The Hill” who wrote a hit piece on Jeff Sessions. It was good TV AND was substantive in that Carlson held a journalist accountable for bias and baseless assertions.

I like the idea of SecState Romney too. He’s popular, well-spoken, and would give the US the unique ability to use ‘Good Cop Bad Cop’ on stubborn countries, much like Kissinger used to do.

Not sure I like this — I respect and like Romney, but he and Trump aren’t close, and I don’t see Romney tolerating Trump pushing him around.

I like Romney more for Vet. Affairs — if there’s anyone in the country who can fix the VA, it’s Mitt.

Fixing the VA is really easy. Recall all VA Medical cards (valid only in VA hospitals) and reissue medical cards valid in any medical facility in the country.

Then move VA hospital patients to private hospitals close at hand, closelly followed by the shuttering of the VA hospitals. Shrinking the government agency that was supposed to help all veterans but turned me down would make my day and save the taxpayer lots of money.

Frankly, this report is nonsense until it actually happens. Until then, it is only wild speculation, assumption, and gossip.

Even Trump has said that if someone says it is from “sources” that it shouldn’t be believed.

The other good thing would be; if you wanted to fumigate the state department after one of the least ethical state department administrations of all time, then replacing that with Romney would about do it. Whatever problems someone might have with him, ‘unethical’ is not one of them.

I believe Trump is smart but some people are claiming he is a genius. I have to wonder if that is true, thinking aboput some of the things happening.

First so much energy about the transition, and it’s been a week + 3 days since he was elected. But all these rumors, like Ted Cruz being appointed AG.

I wonder if Romney is being fed by some people in the Trump camp that he is being vetted for SoS. Then Trump looks to see if it leaks to the press.

Good way to see if he can be trusted not to leak things.

Why in the world would The Don want someone who disagreed with so much of his agenda as Secretary of State? Romney doesn’t strike me as someone who would be a loyal subordinate.

Romney at State does not work for me in any manner, shape or form–and not because he trashed Trump during the primaries.

Romney would likely do a good job in any position, and naming him to a cabinet post might also help unite the incoming Trump faction with the sitting GOPe. A tossed bone.

Romney for the VA. Somebody needs to sit at home during the State of the Union Address.

We need a guy like John Bolton at State – he’ll clean up the entire department. Mittens won’t – he’ll be too busy strutting around the world, preening for cameras, where Bolton would be bulldozing foggy bottom.

Mittens for head of VA where he can do some good.

I’ll just go out on a limb here and state Romney will not be serving in any capacity in the Trump administration.

And I think the “someone very high up” has been heavily smoking a product commonly available in Colorado.