Branco Cartoon – She Gets By

Branco Cartoon – She Gets By

With a little Help From Her Friends 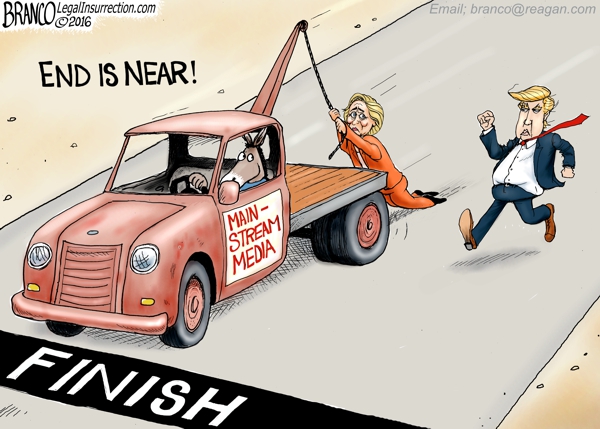 End of the 2016 Election is near and Clinton and Trump are still very close. Cartoon by A.F. Branco ©2016

Although, with none of your considerable talent, I would have added a small child in front of the wrecker…

Or some of the people associated with Hillary that have mysteriously died under the wheels.

A few dozen pieces of baggage dragging along behind her would not be out of place either. The only problem would be picking which ones of the multitude to name…

I’d love to see an alternative version showing her feet tied to the tow rope…and Killary face down, tasting tarmac.

Especially if she wins.

People are finally realizing what some of us have known for years – that the so-called “mainstream media” is no more than the bought-and-paid-for propaganda arm of the Democrats.

Hit the nail on the head with this one.
Pravda could not have done a better job that the complicit US main-stream media.
I can’t even watch them anymore. They disgust me so.

Does the truck have to cross the finish line, or does her hand have to break the plane?

Picture is worth a thousand words!

I did tell someone the other day how impressed I am with DJT’s stamina while traveling so many places as of late. Hillary & I would need a nap. No, definitely not together. Yuck, I’m grossing myself out now.

Good cartoon; before I had seen this one, I had conceived of a cartoon in which Clinton, dirty and fly-ridden, was dragged over the finish line by not only the MSM, but, equally important — also by DOJ, which has clearly corrupted and subverted the FBI investigation into Hillary’s server lawlessness and felonies, as well as the Clinton Foundation pay-for-play schemes, in order, I believe to protect Obama and to conceal his Administration’s lax attitudes, lawlessness and indifference to following protocols with respect to secure e-mail communications. It is believed that, even beyond Hillary’s shenanigans, personal e-mail use to conduct official business is widespread within the Administration. That’s what this is really about — protecting Obama, whose fortunes are necessarily joined at the hip with those of his former lackey, Hillary Clinton.

Which way do I have to vote to get Glen Beck off my radio???