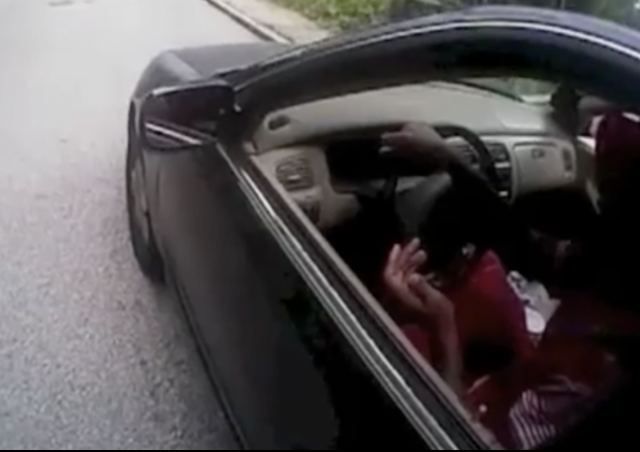 Today is the third day of deliberations in the murder/manslaughter trial of police officer Ray Tensing, and this afternoon Judge Megan Shanahan once again sent the jury back to deliberations after they told her that they were still unable to arrive at a unanimous verdict.

Ray Tensing, you may recall, is the Univesity of Cincinnati police officer who shot and killed black motorist Sam DuBose when the driver attempted to flee a traffic stop after refusing to show the officer a driver’s license.  The events were captured in a rather shaky maneer on Tensing’s bodycam, as we covered way back in July of 2015: Sam DuBose Shooting: Let’s Go to the Video Tape.

We obviously don’t yet know what the verdict, if any, will be, and I’m not here to address the merits of the case again–although it doesn’t appear that my assessment in the July 2015 post is subject to any real change.

Rather, I’m writing to note that had this trial been taking place in any state other than Ohio, Officer Tensing would already almost certianly have been acquitted, or at the very least be even further from a conviction than he is with this current Ohio jury.  The only reason for this is because the trial is taking place in Ohio, and Ohio is the last state to retain a very arcane burden of proof in self-defense cases.

Tensing is charged with murder (and the lesser included charge of voluntary manslaughter, murder under adequate provocation).  Both are intentional killing offenses.

Tensing’s defense centers on self-defense, essentially: yes, I shot Sam Dubose and I did so deliberately, but I did so in necessary defense of my life.  In this case Tensing specifically argues that DuBose was using his vehicle as a weapon to threaten Tensing with imminent death or grave bodily harm, the degree of threat required to justify Tensing’s shooting of DuBose.

Given that Tensing is charged with a deliberate killing offense and that he has raised the legal defense of self-defense, the question naturally arises:  who has the burden of proving/disproving self-defense, and by what standard of proof (amount of evidence)?

The fact that the Ohio jury in the Tensing trial has not yet come to a verdict means that there is at least one jury who does not believe that the prosecution has disproved Tensing’s claim of self-defense by 50%–if they did believe the prosecution had done so, then self-defense would have failed, and given that Tensing necessarily admitted to deliberately shooting DuBose there is no rational basis on which to find him other than guilty of either murder or manslaughter.

Thus, the fact that these Ohio prosecutors have failed, after a complete trial and a full three days of jury deliberations, to disprove Tensing’s claim of self-defense to the legal standard required in that state, they would necessarily be even further away–arguably, hopelessly away–from being able to disprove Tensing’s claim of self-defense in any other state.

More briefly: it is almost certainly the case that Tensing remains in legal jeopardy in this trial only because of the arcane self-defense burden-of-proof requirements of that lone hold-out state, Ohio.

So, let’s try this another again.

No verdict yet means there is at least one jury member in Ohio who believes Officer Tensing’s claim of self-defense has been proven.

Wanna make a bet that jury member voted for Trump?

I’m impressed that you’re commenting on your own comment. Sort of proves that writing clearly & concisely takes some thought.

I’m impressed that you’re commenting on your own comment. Hope you won’t think I’m butting in here, but Cincinnati went blue, even though many of us did vote for Trump. And i was proud to do so.

You seem to imagine that I have unlimited time and leisure to write these posts. I don’t. I work for a living.

If the lack of brevity so disturbs you that you feel the need to post public comment on the matter, might I suggest you reduce my posts to their ultimate conciseness, and skip reading them entirely?

“I would have written a shorter letter, but I did not have the time.” – Blaise Pascal, French mathematician and philosopher (original in French, 1657)

My personal experience in Murder trials has been it could be one juror or several all with different reasons. Some of which go beyond rational thought (Like the Suburban Detroit High School Principal that believed that no 17 year old could get a gun and kill someone when chased down some side streets after an attempted robbery). The whole case was filled with the suspect and various witnesses describing all source of lunatic things. That ended hung also (4th prosecution).

I agree that Ohio’s requirement that the defendant substantiate that lawful self defense existed, by a preponderance of the evidence is indeed a problem for the defense. However, I suspect that the problem is a little simpler than that here.

In order for self defense to be a valid defense, a reasonable man, in the same circumstances as the defendant, would have to reasonably believe that the use of deadly force was necessary to prevent the infliction of death or great bodily harm. Now, the reasonable man standard is very subjective, where a jury is concerned. In this case, both the argument that such a belief was both reasonable and unreasonable. And, that, I suspect, is what is holding up a unanimous decision in this case.

I have always felt that raising a defense of an accidental shooting caused by the direct actions of the victim; i.e. pulling away from the officer in a manner which caused him to fall which caused him to unintentionally discharge his weapon as he fell. The defense chose to take a different road, however. Sometimes this is based upon statements already made by the defendant and sometimes for other reasons. Advising the defendant on which path to take is a defense attorney’s job. I hope that they are successful.

Question for Andrew. In your view, which States, besides Ohio, place the greatest legal burden on the accused for a self-defense pleading concerning an incident that occurred outside of the “castle”?

what can we learn from this? don’t live in Ohio if you cherish the right to protect yourself.

The explanation could be even simpler than a failure to prove/disprove self defense. The jury could have an SJW on it and they won’t acquit because of race.