Supervisor of Elections faces another huge controversy this year. 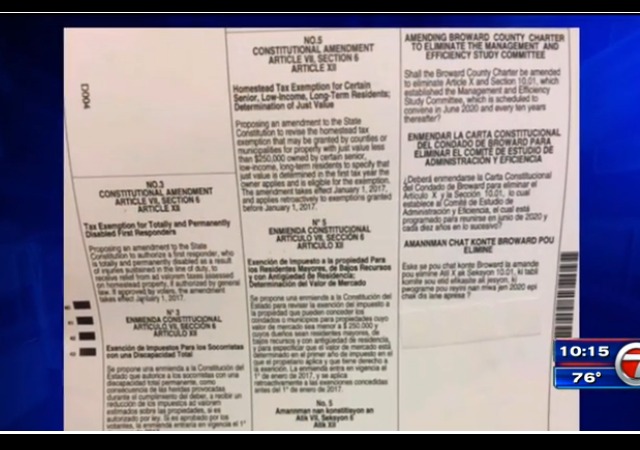 The National Organization for the Reform of Marijuana Laws (NORML) chapter in Florida has sued Broward County Supervisor of Elections Dr. Brenda Snipes after citizens said their mail in ballots did not include Amendment 2 to legalize medical marijuana:

It asked a county court judge to require that the elections office distribute new ballots to all voters who have received vote-by-mail ballots and to include information that explains that Amendment 2 had not been included on previous ballots.

“The end result of this error is catastrophic and cataclysmic as it applies to this ballot item, effectively disenfranchising voters and eliminating the right to vote on certain matters which have been lawfully placed on the ballot,” the lawsuit says.

The amendment needs 60 percent of the vote to pass.

“Every voter and vote, therefore, is critical,” the lawsuit says.

Former Oakland Park commissioner Anne Sallee, her husband, and a few neighbors did not have the amendment on their ballots. The South Florida Sun Sentinel said ballots vary “depending on where a voter lives in the county, so not everyone was affected.”

But all these votes are important, especially since Broward is “Florida’s second-most populous county and houses 1.2 million registered voters.” Plus, the citizens of the county showed strong support in 2014:

So far, more than 60,000 Broward voters have cast absentee ballots. Another 189,000 absentee ballots have been mailed to voters in the county but not yet returned. There are nearly 1.2 million voters registered in Broward.

Broward — Florida’s second-most populous county — supported medical marijuana the most in 2014, when voters passed it by a margin of almost 159,000 votes. Though the measure received 57.6 percent support statewide at the time, it failed because state constitutional amendments need to pass with 60 percent of the vote in Florida.

Due to those stats, some believe the removal was not an accident:

The head of the group pushing for the initiative, Orlando attorney John Morgan, said he would consider filing his own lawsuit, perhaps in state court in Tallahassee, and petition for a complete re-vote statewide. He said he wanted to speak with an election-law attorney first.

“I need to see what my options are including litigation to have this entire matter reviewed including the possibility of a new vote,” Morgan told POLITICO Florida.

He said he wondered if Snipes’ office intentionally messed up.

“Broward County was our best county last time. And I don’t believe in accidents,” Morgan said.

But this is not the first controversy for Snipes and her office:

About 1,800 voters in Davie received incorrect voter ID cards, before the Aug. 30 primary, which Snipes attributed to a printing error. A judicial candidate’s name was reported to be misspelled on early voting ballots for that election.

More recently, her office was criticized for printing ballots for the November election that include the word “no” in the “yes” line on the county’s transportation sales surtax question.

Snipes is a black female democrat. What a surprise!

She probably spent most of her time and attention on trying to figure out a way to throw her county to Hillary.

They must pledge to respect the outcome of the election! (Like Trump.)

A year or two from now, the court will find that yes, it should have been on all the ballots… and what, order them to put it on the ballot again?

Proposition 2 is a constitutional referendum and it’s supposed to appear on every ballot.
This is no accident, and if it’s an accident, then it has to be the result of extreme incompetence. The supervisor of elections needs to go.