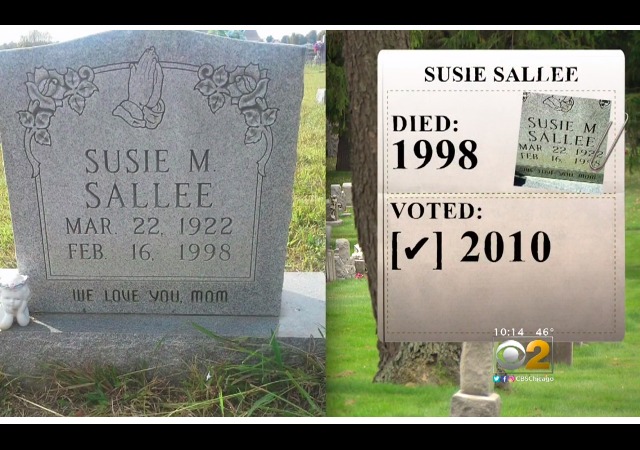 “Vote early, vote often” is one of Chicago’s unofficial mottos. One of the most corrupt cities in America is famous for its voter fraud back in the day, but officials now insist that everything is on the down low and technology has helped wipe out voter fraud.

Well, investigators at the local CBS station found that “119 dead people have voted a total of 229 times in Chicago in the last decade” after they merged the “Chicago Board of Election voter histories with the death master file from the Social Security Administration.”

Jim Allen, a city election board spokesman, says a majority of those dead voters were most likely clerical errors, involving family members with the same names and addresses.

“This is not the bad old days,” Allen says. “There are just a few instances here where a father came in for a son, or a neighbor was given the wrong ballot application and signed it.”

That’s interesting because family members of these dead people disagree.

Investigators said Tadeusz Ciesla voted in 2010, but his nephew Marek Ciesla said he died in 1998:

Earl Smith reported his father’s death in 1997, but he “has voted twice after he died.”

Robert Sallee insists he has told the election board multiple times about his mother’s death in 1998. The investigation revealed she voted twelve years later:

“They’re just not taking her off the rolls,” he says.

With Chicago’s past, it’s hard not to believe that voter fraud exists. After all, Chicago allegedly gave John F. Kennedy the presidency in 1960 against Richard Nixon. The records show that President Kennedy beat Nixon “by 9,000 votes in Illinois by capturing what some considered a suspiciously high 450,000 advantage in Cook County.”

But before that, Mayor Anton Cermak instilled the “Democratic Machine,” which “ensured voters picked the right candidates, and the people who worked in it weren’t shy about using money, bribes or fake identities to get votes for Democrats.” One way to do it? By keeping dead people on the electoral rolls:

Electoral rolls are supposed to keep track of who is registered to vote. The rolls would be rigged so dead people’s names still appeared on them, [journalist Bob] Crawford said, meaning others could vote for the candidate of their choice in the dead person’s name.

Sometimes, people working for the Machine would even go into cemeteries and take the names off of tombstones, then go back and fill out voter registration cards with the dead person’s names as if they were still alive, Crawford said.

Unfortunately, all we know about these votes is that—officially—dead voters are still active and voting. We don’t know exactly how they voted. And that’s the problem. If it could be shown that any of them ever voted for a Republican, then the press would realize that this sort of voter fraud isn’t a trivial matter after all.

Even if you’re an opponent, you have to admire the commitment to politics of dead people in Democratic cities and districts.

I blame voting too close to Halloween.

Zombies can’t get driver’s licenses, which would make it a form of voter suppression.

That’s probably why the harpy doesn’t drive herself.

I read hateful hitlery has the Civil War and WW1 veterans voting 100% for her.

Gee, no sign of Rags. And after all his denials of voter fraud earlier.

Point to one, you lying sack of filth.

I’m gonna have to get me a few of these anti-groupies too. You are living rent free in about half a dozen commenters’ heads around here.

Dear Henry Hawkins: Our thoughts of Rags are basically sadness, sadness that he isn’t getting the help he needs to deal with his issues.

Well, as a retired psychologist, I have to say that it’s the folks who follow him around like hurt puppies who present the longer menu of needs. Some of y’all can’t even wait for him to post, making up what Rags would have said, and then yip-nipping at that, puppies chomping strawmen. It’s amusing.

Actually, you can legally vote after you’re dead, assuming you vote by mail and the item is postmarked before election day.

I really doubt that Susie M. Sallee, whose headstone shows that she died in 1998, completed an Absentee Ballot for the 2010 elections prior to her death, posted it in the mail, then died, and then had her vote counted in 2010. They did not have the 2010 absentee ballots printed before her 1998 death. Nice try, though; it is a good technicality!

I’d be willing to bet that none of the people CBS identified as being dead have been removed from the voter rolls. That seems to be how it goes for vote fraud in the US: even after being identified nothing is done, no election is retaken, and nobody gets prosecuted. How about that lady who said on television she voted 6 times? Apparently admitting to committing felonies on camera isn’t enough to get a district attorney’s attention.

The problems with voter fraud are manifold. Just consult your memory. How did Al Franken win a senate seat? Felons’ votes were counted. That election contest was clear.

What did WJ Clinton do in the 90s to help his vote totals in California? He arranged for – I forget the number – about 100,000 aliens to be naturalized months before they were technically eligible for vote. The dems turn over EVERY rock for a vote. Every rock.

Also with Franken, a couple boxes of previously uncounted votes were “found” in the trunk of an election worker.

Never underestimate the power of the dead to vote Democrat.