The photo symbolized the end of the war. 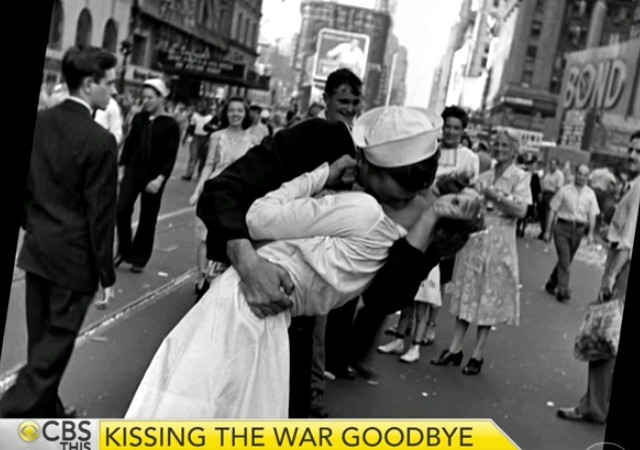 Greta Friedman gained fame when a photographer captured the moment when a soldier grabbed her in Times Square and planted a kiss on her as America celebrated the end of World War II. It quickly became an iconic picture.

Her son Joshua confirmed the 92-year-old nurse passed away this morning.

She spoke to CBS News in 2012 about the moment:

“I did not see him approaching, and before I know it I was in this vice grip,” Friedman told CBS News correspondent Michelle Miller in 2012.

George Mendonsa said he’s the sailor in the photograph that would come to symbolize the end of World War II, and Friedman was the “nurse” in white. (She was actually a dental assistant.)

“It was the moment that you come back from the Pacific, and finally the war ends,” Mendonsa said.

Mendonsa said he didn’t kiss her for long.

As the perfect strangers locked lips, world famous photographer Alfred Eisenstaedt snapped four pictures in just 10 seconds. CBS News reunited Mendonsa and Friedman in 2012 at the spot of their kiss for just the second time since that day in 1945.

“The excitement of the war bein’ over, plus I had a few drinks,” Mendonsa said. “So when I saw the nurse I grabbed her, and I kissed her.”

“Greta Friedman gained fame when a photographer captured the moment when a soldier…”
That’s a sailor.

My condolences to her family and friends.

It’s the end of an era. So sad. Rest in peace Ms. Greta. May the LORD bless and keep you and your family.