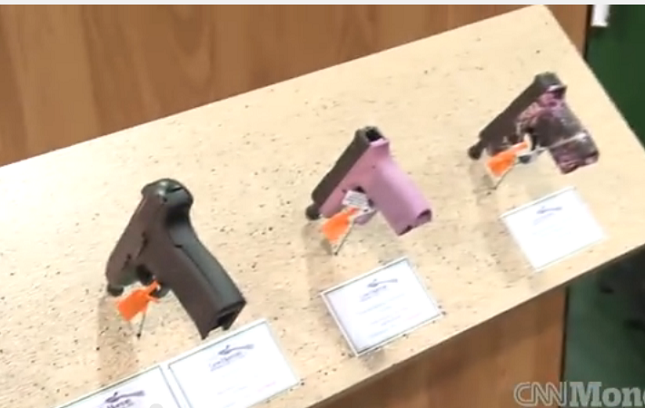 One of my favorite articles not published at LI this year is the New York Times piece flummoxed by and bemoaning the fact that Obama’s calls for gun control go nowhere and serve only to increase gun sales.

More guns were sold in December [2015] than almost any other month in nearly two decades, continuing a pattern of spikes in sales after terrorist attacks and calls for stricter gun-buying laws, according to federal data released in January.

The heaviest sales last month, driven primarily by handgun sales, followed a call from President Obama to make it harder to buy assault weapons after the terrorist attack in San Bernardino, Calif.

Fear of gun-buying restrictions has been the main driver of spikes in gun sales, far surpassing the effects of mass shootings and terrorist attacks alone, according to an analysis of federal background check data by The New York Times.

This assessment of Obama as “the best salesman for firearms” is proving truer than ever as 44% of American homes now contain one or more firearms.

The Washington Examiner reports that “Pew Research Center, in a poll on guns released Friday, showed that 44 percent of the country has a gun in the house. Some 51 percent don’t.”  It’s not clear where the “missing” 5% stand.

It bucks the trend of other polls, namely CBS News, which found that the percentage of gun ownership hovered in the mid-30s.

Yes, anti-gun liberals will point out that the majority of households don’t have guns. Yet, the same survey found that 52 percent of Americans prioritize protecting gun rights over new means to control ownership. Moreover, it’s a constitutional right. It’s part of the Bill of Rights, which is immune to public opinion and for good reason.

Interestingly, Republican voters have become more supportive of the Second Amendment since 2008. 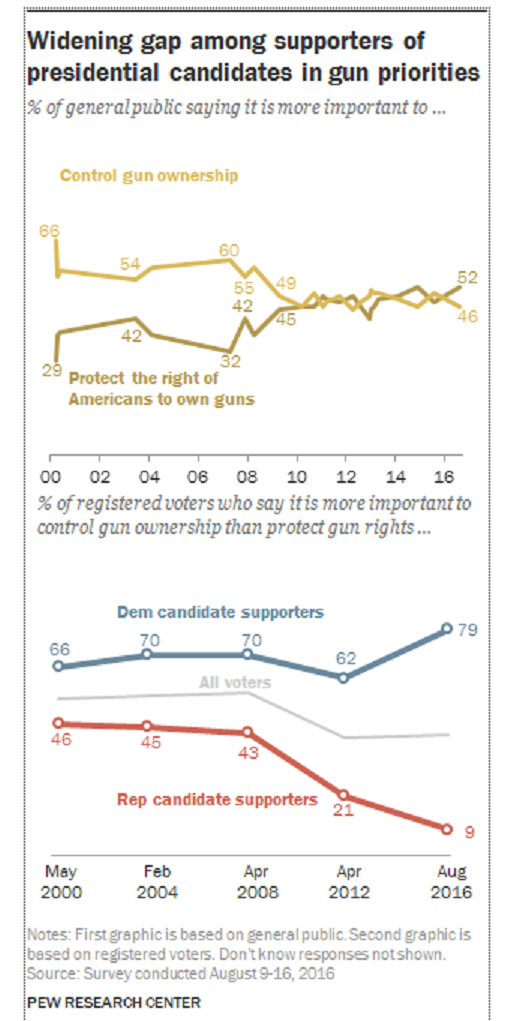 While Americans are purchasing more guns, they are still susceptible to “slippery slope” proposals like expanding background checks, banning some firearms, and banning terror watch listees from gun ownership without due process.  Interestingly, bans on certain weaponry did not reach 50% among millennials. 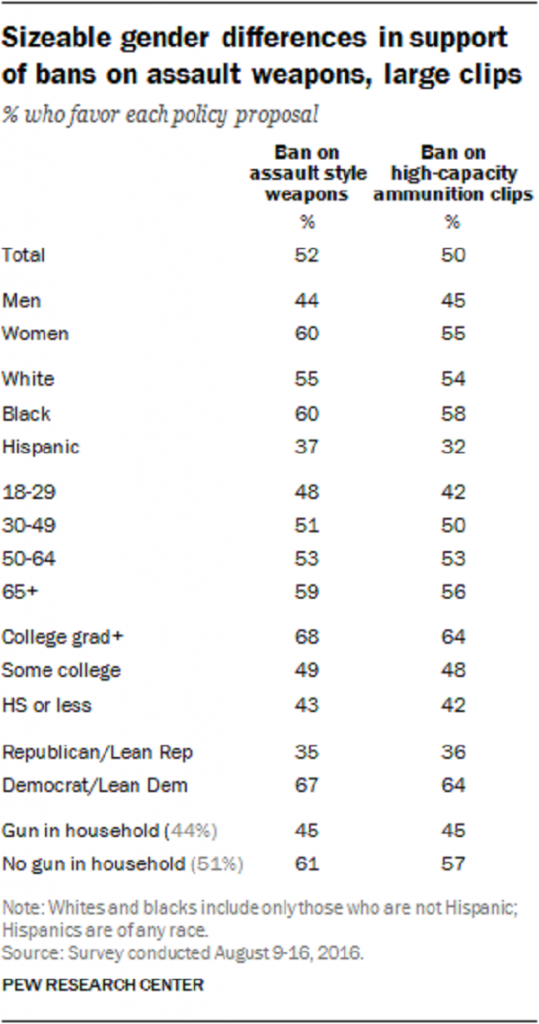 The numbers regarding “girls with guns” are hotly debated, but gun manufacturers have relatively recently been catering to women who want to buy their first firearm, are interested in adding a “girly” gun to their collection, and / or take weapons training with the goal of eventually purchasing a gun.

Gun manufacturers are producing guns that are pink and purple and that sport glitter on smaller grips designed with the women’s often smaller hand in mind.  As an anecdotal aside, my mother called me after she had visited a local gun shop enthusing about “the cutest gun” she ever saw.  It was pink.

The New York Times notes that “gun sales have more than doubled in a decade,” but to be fair, it’s not just Obama’s and the Democrats’ repeated calls for gun control that are driving up sales.  With the rise of ISIS and of terror attacks on our own soil under Obama’s watch, Americans feel less safe than they did eight years ago.

Consider that many gun owners will not reveal that to a stranger [e.g., pollster], it is likely that the numbers are actually closer to even.

Then consider that in NY, NJ, and Chicago – extremely high population areas – it is almost impossible to own a gun legally, the numbers should really scare the gun grabbers.

People voting with their own dollars.

Now, THAT’S an American poll I trust and support!

If some stranger calls me up out of the blue and asks me whether we have guns in the house, and how many, and what kind, they’re getting hung up on without a further word.

Who tells strangers stuff like that, especially in this day and age?

Interesting that the poll shows little support for gun control among Hispanic voters. I’m thinking that many have first hand experience with governments that make it essentially illegal to own a firearm.

I find it fascinating to look at the history of this country going all the way back to the Revolutionary War. Historians have estimated that around 45% of the colonists supported the Revolution, and about 20% were loyalists to the crown. The balance were neutral.

Interesting how those numbers line up with some of what we see in our politics today. 45% didn’t want to be under the thumb of a “king.” You can bet those same people believed in their God-given right to defend themselves. This study says roughly the same percentage today own a gun.

20% were loyalists to the crown… they had an innate desire to pledge fealty to government that they had no control over but which had total control over them. A similar percentage today are hard-core progressives. Our federal government is their “king” today, but I believe the underlying psychological urge is the same.

I think there are simply fundamental and profoundly different psychological foundations for people’s mind-sets and personalities which have always been and will always be there. To a certain extent we can use our political system to find common ground, but these fundamental differences will always remain a source of tension between us.

Nothing we can say will cause them to stop pushing towards an all-powerful “king” of a government, and nothing they can say or do will make us stop saying “phuck you, leave me alone and keep your hands off my guns.”

I’ve acquired “numerous” firearms since Obama has been in office. I’ve also taken up reloading. Heck yes he’s the greatest gun salesman in the history of the world. And besides the inherited one, every damn one of ’em required a background check, contrary to popular liberal belief.

The person polled—i.e., the person who picks up the phone and is willing to waste time with a pollster—is generally not the gun owner; he just knows (maybe) if there’s a gun in the household. Then he’s asked questions about policy. But he gives his answers, not the gun owner’s. This poll, even if tallied honestly and handled in a statistically respectable manner, tells us nothing about gun-owner’s opinions on gun-control policies.

Pollsters keep doing this crap, and people who should know better keep treating the numbers as if they mean something.

Suffering two terms under the cheap shyster now lazing in the White House, I’d guess it’s extremely unlikely that any firearms owner would ever respond to a poll regarding firearms ownership. In fact, I’d bet most firearms owners will be suspicious of all polls from now on and pollsters can expect hostile disconnects. Big media pollsters have made this bed and information will forever be unreliable.

As said above… there are great concentrations of people living in areas where any kind of gun ownership is forbidden. Maybe a lot of those people actually follow the law causing any poll using responders from there as part of a national poll is predestined to be wrong; and those who arm themselves in spite of the law are very unlikely to admit to a poll-taker that they own a firearm.

This weekend’s body count from Chicago gives some indication that someone in that burg owns a firearm. I also note that the two shooters arrested for the shooting of the NBA guy’s relative had “long criminal records” (according to the police chief’s press conference) so they should have been blocked from having a gun by the “common sense” guns laws we hear so much about.

Trump should be campaigning on the theme that the people who are so dumb as to think their gun laws (and economic plans) will work THIS time when they have failed so dramatically in the past are not worthy of being elected.

The poll results are as useless as the questions.

WTH is an “Assault Style” weapon?

What would be the result if the question was accurately phrased something like; “Do you favor a ban on semi-automatic rifles that no military in the world uses to assault anything”?

Then there is high capacity “clip”.

There is no such thing of course. They surely mean high capacity “magazine” but what is “high capacity”?

Again, what would be the result if the question was accurately phrased, “How many bullets should a gun be allowed to hold”?

As many as you can comfortably wield in it!

What is “high capacity”?

Again, what would be the result if the question was accurately phrased, “How many bullets should a gun be allowed to hold”?

Sorry Archer you’re wrong.
The only answer is however many the gun owner wants or feels they need.
Read the article below, the woman took her kids to the attic of their home before firing 5 shots, which all hit the intruder by the way, and the guy still was able to get out of the house.
Imagine if there were two guys after her and the kids. She’d emptied her revolver, she and the kids would have been helpless against the other intruder.

LOGANVILLE, Ga. — Authorities say a Loganville woman shot an intruder five times and the man was arrested after he tried fleeing the scene.

WSB-TV (http://bit.ly/134dM6d ) reports the unidentified woman saw a suspicious man outside her window Friday around 1 p.m. Authorities say the woman took her children to the attic as the man broke in with a crowbar.

When the intruder arrived in the woman’s attic, police say she shot him five times. Authorities say the woman ran out of bullets and ordered the man to lie still. Police say the woman and her children left the house and the intruder, identified as 32-year-old Paul Slater of Atlanta, tried fleeing the scene.

Police say Slater crashed his car in a wooded area, has been arrested and is hospitalized at Gwinnett Medical Center.

The Washington Examiner reports that “Pew Research Center, in a poll on guns released Friday, showed that 44 percent of the country has a gun in the house.

It’s not clear where the “missing” 5% stand.

I can theorize: Homes with convicted felons (about 1%) will fall into that group, and they cannot legally own a firearm, so they will not admit if they do. Then there are the people that won’t tell an unknown pollster about firearms in the home, if any exist or how many there are. There’s probably also a few that don’t own guns but don’t want to reveal that to a pollster, either (for the same reason nobody hangs a “Gun-free home” sign over their doorstep).

For government/policy purposes, it’s safest to assume that at least four of those five percent own guns, and that should include many of the felon households.

Was there a question about the boating accident?