How inclusive of them. 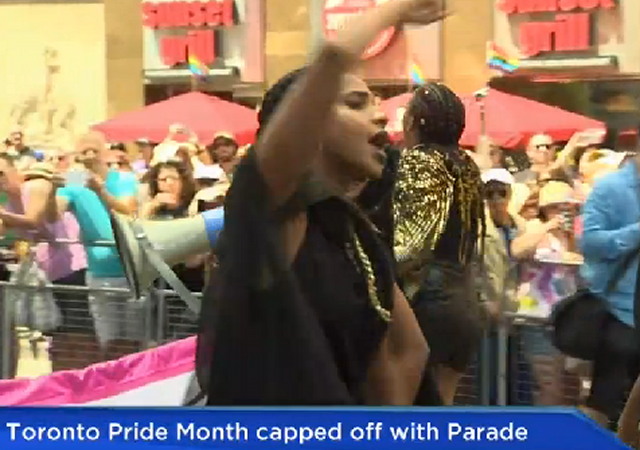 The Toronto chapter of Black Lives Matter was recently invited to participate in the city’s gay pride parade.

At one point, the Black Lives Matter members stopped and sat down on the street halting the entire procession. Then they started issuing demands.

Sunday’s Pride parade was historic for the city in many ways.

It was the first time a sitting Prime Minister, Justin Trudeau, marched alongside thousands of members of the LGBTQ community and its allies. It was also the first time Black Lives Matter Toronto did the same, leading a passionate procession down Bloor and Yonge Streets.

When their members reached College Street they stopped, sat down, and ground the parade to halt. As thousands along the route wondered about the delay, members of Black Lives Matter issued demands to organizers. One of them was for the removal of all police floats in the future – a significant request considering the police’s popularity and presence in Canada’s largest pride parade…

Pride Toronto Executive Director, Mathieu Chantelois, met with the group and signed all their demands according to Black Lives Matter’s co-founders Sandy Hudson and Rodney Diverlus.

Just last month, Black Lives Matter activists backed out of participating in the San Francisco pride parade over the fact that the event would be protected by police.

Several of the honorees of San Francisco Pride, the nation’s largest LGBT pride event, withdrew on Friday from the “racial and economic justice” themed parade and festival this weekend in response to the increased policing measures put in place after the Orlando attack.

“For us, celebrating Pride this year meant choosing between the threat of homophobic vigilante violence and the threat of police violence,” said a statement from Black Lives Matter, an organizational grand marshal; Janetta Johnson, a community grand marshal; and sex worker advocacy group St James Infirmary, a “Heritage of Pride” award recipient.

“We had a tough decision to make, and ultimately we chose to keep our people safe by not participating in any event that would leave our communities vulnerable to either.”

On Tuesday, SF Pride announced that this year’s events would have a “significant police presence” and that, for the first time in the celebration’s 46-year history, attendees at the festival would be required to pass through security screening. The decision was made in the wake of the mass shooting at an LGBT nightclub in Orlando, in which 49 people were killed.

Many LGBT people of color expressed concern with that news, citing the historic targeting and harassment of communities of color by police.

“I’m more afraid of police than terrorists,” Johnson, who is a black transgender woman, told the Guardian on Tuesday.

The left’s hierarchy of victimhood changes so fast and often, it’s hard to keep up.

Don’t you just feel the love, tolerance, inclusiveness, oneness with all (except the police of course)? I think it is wonderful to see such virtue pouring from the souls of the SJWs. World peace and Utopia are near–I can feel it!

It gets better. The recently elected Prime Minister of Canada, Justin Trudeau, marched in this parade in spite of the ban on police participation.

The new PM, Junior, was already in the parade, when the cretins from BLM made their appearance. He can be blamed for many things, but not the parade delay.

Plus there was no doubt plenty of armed protection around him anyways.

Are you illiterate or just dumb? Or did you not bother reading the article before commenting on it? There was no ban. The police were there, just as they have been every year till now. Idiot.

Why would any sane person want to be a police officer in any large city, these days?

The ones who are financially entrenched are staying and keeping their heads down (google “depolicing.”) As for recruitment, it’s a nation-wide problem. Agencies are lowering standards but still are having difficulty hiring. All at a time when the public’s expectations of the police are reaching ridiculous proportions (i.e., the line patrol cop must be lawyer, counselor, medic, mental health expert, etc. [oh, almost forgot, law enforcement officer.])

It’s not a good time to be in law enforcement.

So could a gay police person march in the parade? Would they be allowed to make an arrest for a crime they witnessed while in the parade?
So in future parades are the LGBTQ and or BLM going to provide security and be held responsible for any property or physical damages?
Won’t the insurance rider for the parade increase since there is no police protection?
How are they going to be able to get permits for their future parades if they are not going to have a police detail?
If a political figure marches with them do they need to leave their security protection at home?

Where did you get the ridiculous idea that there will be no police protection or “police detail” for future parades? You certainly didn’t get it from this article. Did you not bother reading the article before commenting on it?

Yes, of course any policeman who sees a crime will be allowed to make an arrest. Who could stop him, and on what authority? No, “the LGBTQ and or BLM” are not going to provide security, because the police will be doing that. No, their insurance rates will not go up. Since when do parade permits depend on a “police detail” being present? But whatever that means, it will still be there. And no, nobody will have to leave any security at home. Seriously, where did you get any of these ideas? You and JBourque.

No need to be douchie about it, you come off as overly sensitive and defensive.

The police had an actual float in the parade. The question I have was it a gay police gay pride float or just a police float in a gay pride parade?

Try to keep it civil, it’s the internet not face to face in an alley.

If you don’t come up with ridiculous claims that have no foundation in the article, then I won’t challenge them.

As everyone says BLM believes the Police are more dangerous to them then any other group. They then target the police float forcing it out of the parade. That leads one to believe that BLM does not want the police there at all. So how can BLM feel safe being protected from the force they are most afraid of by that same force?

Is that easier for you to understand?

What BLM doesn’t want is irrelevant. A ban on police presence was not one of the concessions they wrung out of the parade management, so you had no foundation for your ridiculous claim that they would not be there.

How is it irrelevant? They have proof that all they need to do is disrupt a function and they will be given what they want. Their hate for the police is well known. It doesn’t take any stretching of the imagination to see them sit down and force the issue for no police protection and then request their own protection. Who could BLM get to show up and protect them in place of the police????

Thank you for providing all of us with a clear window into the character of a Trump supporter.

What makes you different from the riff-raff mentioned above?

Hmmm. To me, the real news is that Canadian police is now slaughtering blacks left and right.

I never would have guessed.

Hey, every other police force in the world is apparently doing it, so why should they be left out? The sad thing will be if some policeman somewhere actually believes this is what police are doing, and decides to join this imaginary trend. You can bet that those who made it up and convinced him of it will take no responsibility.

So pull all the cops from the parade route. Let them provide their own security.

That would be emotionally satisfying, but petty and unprofessional, and very un-Canadian — about as un-Canadian as the parade management is being in excluding them in the first place — so it won’t happen.

Here we see the assimilation of and precursor to Islamic No Go Zones. Be careful what you demand.

What no-go zone are you seeing here? The police will still be there to keep order and prevent crime and terrorism, just as they are now.

We agree. The police are there now. But.

Compare the BLM feeling of being “excluded” or unwelcome by society and being treated wrongly by LEOs to what is happening in Sweden with the Islamic immigrants who detest LEOs and have created No Go Zones. As I said, the BLM actions here are “a precursor to waht we may seen in the future.

Perhaps the Toronto police should just absent themselves from the whole parade – no floats, no marchers, no services and no security.

Reading the BLM demands I have to ask – do deaf blacks require a different ASL interpretation? Who knew there was sign language for trash talking.

They should, but that would be petty so they won’t.

The idea isn’t that black interpreters are needed for black deaf people. Those interpreters aren’t really there for deaf people at all, they’re there for virtue signalling. There might not be any deaf people in the audience, but you still need someone signing, just in case. (Why you don’t also need someone translating into Xhosa, Laotian, and every other language that some audience member might want, is a mystery to me.) So having black ones signals even more virtue, while achieving no less.

And the exclusion of participation by the police somehow isn’t petty? The SJWs should be given the same level of disregard they give others?

No, I wouldn’t call the exclusion of participation by the police petty. Pettiness requires some genuine but minor grievance that’s being carried too far. BLM have no genuine grievance against the police, so their demand for the police to be excluded is not petty, it’s just an irrational tantrum such as one expects from an overtired toddler. Retaliating in kind would be petty.

They should get that freestylin’ South African interpreter who worked Mandela’s funeral.

Look at the purpose rather than the content of their actions. The purpose is to destroy the legitimate legal order so it can be replaced by the totalitarians. Does this smell anything like a revolutionary tactic?

As JAJ suggested above, do not submit to these “No Go Zones.” I think they have in Paris–How has that worked out?

I disagree. The Left’s hierarchy of victim-hood is quite discernible:
1. Black (trumps everything)
2. Muslim
3. LBGTQ
4. Feminism
5. Other races (excluding Oriental)
6. College students

Extra points for being deaf or otherwise differently abled.

Milkshakes is certainly on a tear today . . . .
Must have had BOTH his All Bran AND Ex Lax!