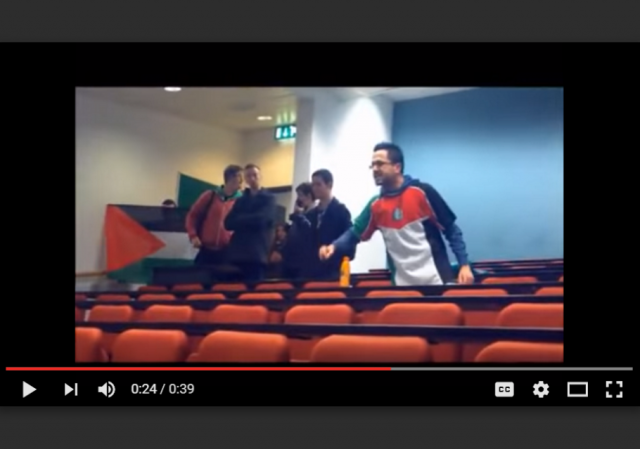 In March 2014, I posted an article about one of the more vile shout-downs of a “pro-Israel” speaker on campus, BDS in Galway: “You’re f-ing Zionist, f-ing pricks, get the f–k off our campus”:

This video of an anti-Israel Boycottt Divest and Sanction activist at National University of Ireland – Galway, shouting profanities at Professor Alan Johnson of the Fathom journal, is beginning to get attention after our post about it on Friday. Johnson supports a two-state solution and is against BDS.

The video, obtained by the Irish for Israel, features NUI Galway student Joseph Loughnane shouting as a row of students behind him banged on the tables in support and themselves shouted (off camera, as video panned towards speaker):

Professor Johnson, the subject of this abuse, has written a blog post about the incident and what he believes was behind it, BDS bullies at Galway University:

Third, ‘Israel’ and ‘Palestine’ have become tied up with the performance of political identity in the West in a most dangerous way. ‘The Palestinians’ are a stage on which the BDS activists act out their identity. To make that possible, ‘The Palestinians’ must be reduced to pure victims of the evil Nazi-Israelis. For only those kind of Palestinians can enable feelings of moral superiority, purity, quest, meaning, even transcendence of sorts. Palestinians being starved by Assad hold no interest. Palestinians being thrown from rooftops by Hamas members hold no interest. When Salam Fayyad is building up the Palestinian Nation the BDS activists just yawn, or denounce him as a collaborator. Only as agency-less pure victims can the Palestinians play their allotted role as a screen onto which the individual projects his or her identity of the righteous activist. It is the Palestinians misfortune that they have become this.

One of the things I noticed is that at some point the original video posted by Irish4Israel was taken down supposedly for violating YouTube’s Terms of Service: 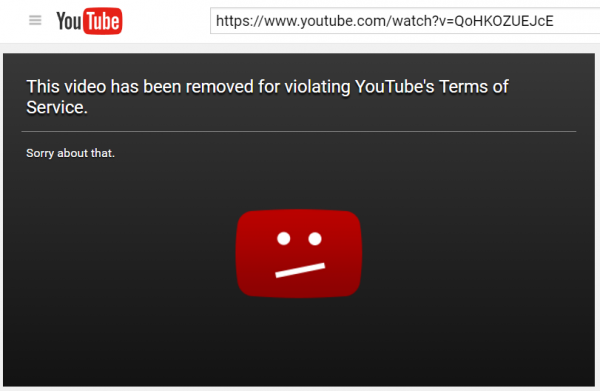 I assumed the violation was the profanity, but it was a valuable news item, reported on in many places including The Blaze, where the video doesn’t work to this day: 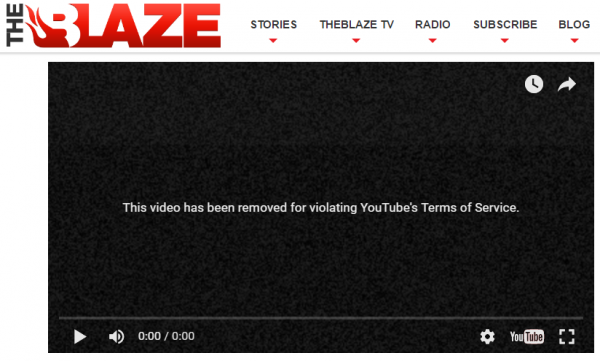 Fortunately, I had downloaded the video, and as I saw the takedown, I posted it on Legal Insurrection’s YouTube account, where it has almost 14,000 views:

Since then I’ve written some more posts about the incident:

And I’ve embedded the video numerous times in other posts about BDS shoutdowns, which seem to be multiplying. But I haven’t given a lot of thought to the video or Joseph Loughnane since then.

Until yesterday, when I received a notice from YouTube that a “privacy complaint” was filed seeking removal of the video. Under YouTube’s guidelines, normally such a complaint must be filed by the person claiming his or her personal privacy was violated.

This is to notify you that we have received a privacy complaint from an
individual regarding your content:

Video URLs: http://youtube.com/watch?v=1gkiGUBAM7g
The information reported as violating privacy is at 0_00-0_24

We would like to give you an opportunity to remove or edit the private
information within the content reported. You have 48 hours to take action
on the complaint. If you remove the alleged violation from the site within
the 48 hours, the complaint filed will then be closed. If the potential
privacy violation remains on the site after 48 hours, the complaint will be
reviewed by the YouTube Team and may be removed pursuant to our Privacy
Guidelines (http://www.youtube.com/t/privacy_guidelines).

If the alleged violation is located within the video itself, you may have
to remove the video completely. If someone’s full name or other personal
information is listed within the title, description, or tags of your video,
you can edit this by going to My Videos and clicking the Edit button on the
reported video. Making a video private is not an appropriate method of
editing, as the status can be changed from private to public at any time.
Because they can be turned off at any time, annotations are also not
considered an acceptable solution.

We’re committed to protecting our users and hope you understand the
importance of respecting others’ privacy. When uploading videos in the
future, please remember not to post someone else’s image or personal
information without their consent. Personal information includes, but is
not limited to, Social Security number, National Identification number,
bank account number or contact information (e.g. home address, email
address). For more information, please review our Privacy Guidelines
http://www.youtube.com/t/privacy_guidelines.

This is the mark in the video YouTube has identified: 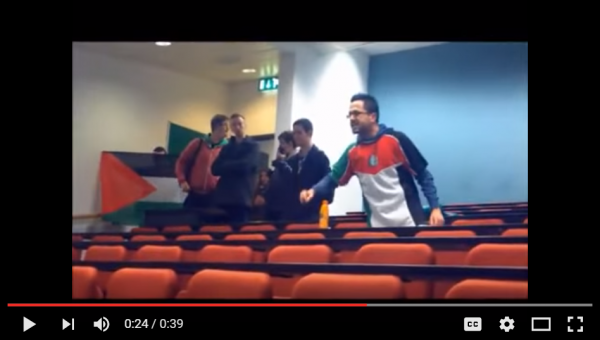 Regarding the notice of privacy complaint below, the complaint is without any justification. The person in the video engaged in conduct at a public event, and his actions have received widespread public attention. The person in the video also is a political activist to calls attention to himself and has received substantial news coverage for his actions. See, e.g., this Google search, https://www.google.com/#q=Joseph+Loughnane

This video is proper reporting and in the public interest. To take it down over a privacy concern does not comply with YouTube’s own Privacy Guidelines, which state “We also take public interest, newsworthiness, and consent into account when determining if content should be removed for a privacy violation.” This video is of a news event that took place in public, there is no expectation of privacy for such public conduct.

The attempt to cause the take down of this video is an attempt to suppress legitimate journalism and news reporting. YouTube should not become a party to that. Please deny the privacy complaint, and inform me of that outcome.

I don’t know how YouTube will rule. If the video is taken down from YouTube, it will be a blow to the public’s right to know about the true face of the BDS movement.

The video will not disappear completely, as I have uploaded it to out own server, but But in any event, I have also uploaded the video to our own server, but given the huge viewer base of YouTube, damage will have been done.

YouTube notified me this morning that is has removed the video:

As you may know, our Community Guidelines describe which content we allow – and don’t allow – on YouTube. Your video BDS Bullies at NUI Galway was flagged to us for review. Upon review, we’ve determined that it violates our guidelines and we’ve removed it from YouTube.

Please note that this removal has not resulted in a Community Guidelines strike or penalty on your account.We encourage you to review all videos in your account to make sure they are in line with our community guidelines as additional violations could result in strikes on your account, or even lead to account termination.

Please see this post about the unjustified removal of a video about public conduct by a public figure which generated much news coverage at my website and elsewhere — but now has been removed by YouTube to protect the “privacy” of the person in the video, https://legalinsurrection.com/2016/06/someone-wants-to-suppress-this-video-of-vile-bds-shoutdown-of-professor/

How does YouTube justify this removal? If this removal is necessary for “privacy,” then there literally is no video that shouldn’t be removed by YouTube. This has very serious implications, and I request YouTube’s official response.

I look forward to hearing from you as soon as possible about YouTube’s position as I am writing about this issue from the perspective of the threat to journalistic use of YouTube that this ruling presents.

How about following up with a letter warning them that if they do take this video down over these “privacy concerns” then you will immediately file privacy complaints over every video you know of that features your face or identifies you in any way, and you will encourage your readers to do the same, and they will have to come up with ways to distinguish this video from all of those. Or they can do the right thing now and save themselves all that.

Your idea has potential, Milhouse, but I think threatening to put YouTube in a position where it will have to make a public statement exposing itself as a bunch of terror-supporting, Jew-hating jerks is probably less effective when the target has already made statements exposing itself as such.

I don’t know whether to go to your YouTube page and click THUMPS UP to indicate I approve of the video (and not the anti-Semitism) or vice-versa.

Joseph Loughnane, privacy is something you should have thought of before you did your (hateful) act for the world to see. You knowlingly did these things before many others. Your words and actions have been recorded.

And whatever is hidden will be uncovered.

SUPERLATIVE post on a very annoying exercise of power. The unknown Keepers at YouTube, GoFundMe, PayPal, Facebook, Twitter and even at the State Dept. press room archives appear to be quite unwilling to let us see behind the curtain and reveal just how much bias is the order of the day. I’ll bet you a pitcher of beer that YouTube terminates your video without explanation or recourse of any kind. Will Milhouse’s lawfare response be the only card to play?

Scratch a liberal find a fascist.

Ironically, the best way for that BDSer to get the video taken down is due to hate speech (his own).

They do that when someone posts a vid of “Palestinians” being hateful and violent, unless it’s an Islamist that posts it.

At San Diego State U, the BDS students got their knickers in a twist for being identified by name.

This must be a new whine for them. Expect more of it.

For those who think our kids are going to hell in a hand basket because they support Bernie, I give you this story. If BDS and Hamas and Jew-killing, generally were popular on campus, these people would be thrilled by the publicity of the posters. It does indicate that their fellow students do not approve of their support for genocide.

Our kids are not stupid, they are both young and good-hearted. The appeals of very bad people are effective because they are deceptive, and directed to those good hearts.

Me thinks there’s an easy explanation to this:

Out into the real world …

Time to put that expensive university degree to good use …

A prestigious job at a popular company …

Employers now run an internet check on prospective employees … they Google them, they check Facebook and other social media …

Sure they could excuse a little video of youthful exuberance of the drunk-and-swimming-in-the-quad-fountain kind.

Good luck finding an employer who doesn’t have any Jewish executives or Jewish clients.

I hope Joseph & The Clapping Seals can carry a tune …

Otherwise, they’ll be singing, “Would you like fries with that?”

The internet is forever, dude.

Your 15 minutes of fame might prove very, very costly.

I love how it is OK when they do it, but it is not OK when we respond