Strange Way for Scarborough to Elevate the Level of Political Discourse 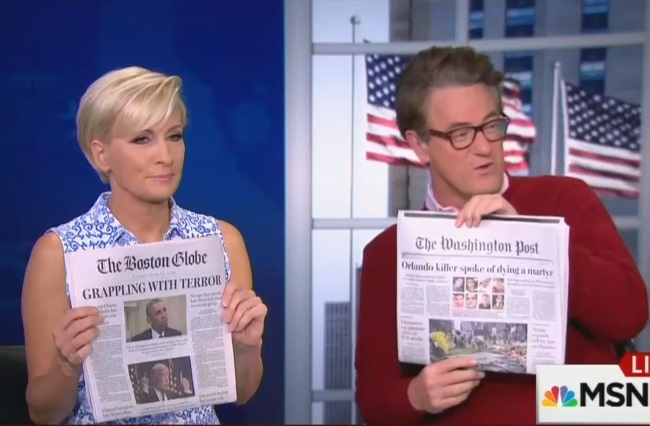 For a guy who regularly decries the debasement of the political culture, Joe Scarborough sure has a funny way of elevating the dialogue . . . On today’s Morning Joe, Scarborough said that Donald Trump reminded him of “scumbags” who said that President George W. Bush had something to do with 9-11.

Scarborough was steamed over Trump’s comments yesterday on the campaign trail that when it comes to Islamic terrorism, President Obama either is not tough enough, or “has something else in mind . . . there’s something going on.” Asked later to clarify his statements, Trump said he would let people “figure out” their meaning for themselves. Scarborough sidekick Mike Barnicle was only too happy to jump on Joe’s bandwagon, claiming that Trump’s statements were a “disqualifier” for his presidential aspirations.

Scarborough- Trump Like ‘Scumbags’ Who Accused Pres. Bush of 9-11 Complicity from Mark Finkelstein on Vimeo.

JOE SCARBOROUGH: It’s a good thing he’s grown, Mike. It’s a good thing he’s grown. It gets worse by the day on the campaign trail. Yesterday, a suggestion, a suggestion, on several channels that Barack Obama was somehow implicated, implicated in these terror attacks and then saying, well, I’ll let people just try to figure out out what I said. It reminds me when a lot of scumbags said that George W. Bush had something to do with 9/11. But to have those on the internet, the standard bearer, Paul Ryan’s candidate, Mitch McConnell’s candidate, the Republican party’s candidate saying that Barack Obama may have been complicit in the killings of Americans is, is beyond breathtaking.

Memo to Morning Joe: There are a lot of scumbags on the left I’ve seen this week.

For the sake of historicity, T-rump WAS one of those scumbags who accused W of complicity in 911.

And again just months ago. Nice lil’ Code Pinkie you have there…

Rags ;
You misspelled hysterics. I understand tho, you’re too close to the subject.

“T-rump WAS one of those scumbags who accused W of complicity in 911.”

Link or it didn’t happen.

Trump has always been a bit of 9/11 “truthers”. Here is one quote, for example:

“… they did know it was coming and George Tenet, the head of the CIA, told them it was coming, so they did have advanced notice and they didn’t really work on it.”

It’s well proven that the government had foreknowledge of Al Quaida and Bin Laden dating back to the Clinton administration. Neither admin did anything about it…as pointed out in previous post, calling that out is not the same as saying Bush was complicit.

Why don’t you read the actual report, linked in your article?

We knew an attack was being planned, where, when, and how was unknown. Did the Bush administration take it seriously? I don’t make that judgement. But it is both fair and necessary to ask the question. The result might suggest an answer.

If you believe Bush didn’t do enough or did not take it seriously enough, that is not the same as what was suggested here, that trump claimed Bush was complicit.

Quit being led by the nose and learn to speak English.

One assumes that a person who is a lawyer has an understanding of the English language.

That is the word used.

You’re all some of the biggest dumbasses ever seen. You follow along like sheep, eyes closed, ears covered.

The liars will not answer because it didn’t happen.

During a GOP debate, Trump very clearly stated that Bush lied about weapons of mass destruction being in Iraq and that he did so intentionally.

As this was the premise for the war in Iraq, it’s pretty hard to read that any other way than that the “lie” was told to convince Congress to vote for war (which they did).

Here is a link that contains video from that debate: http://townhall.com/columnists/larryelder/2016/02/18/trump-bush-administration-knowingly-lied-about-iraq-war-intel-n2120851

Here is my own follow-up post (I watched the debate and was flabbergasted by Trump’s outrageous lie) about Code Pink saying Trump deserved a “Pink Badge of Courage” for trotting out their own oft-repeated lie: https://legalinsurrection.com/2016/02/code-pink-gives-trump-a-pink-badge-of-courage-for-his-bush-bashing/

There are your links. He said it. I heard it, as did millions of Americans who watched that debate. It happened.

The something that’s going on is the policy of appeasement.

It’s an interesting technique, one of several the press and politicos use to keep the intellectual quality of American political discourse at a very low level. Pretend to misunderstand someone’s statement, then force him to explain the part you’re pretending to misunderstand. Soon he’s tangled up in the tar baby, and while dithering over the imaginary minor parts of the statement suck up all the air time, the important parts of the statement will never be discussed.

Remember how everyone pretended they didn’t understand Rumsfeld’s “known unknowns” statement? Clear and succinct though it was, they all managed to play dumb. And they’re doing the same now. But it won’t work as well as it usually does; Trump recognizes it and simply sidesteps, and the blow falls on empty air. They know they’ve been outmaneuvered, and they’ll piss and moan about it, but that show will only fool those who want to be fooled. (of course that may be enough; the fooled have the same vote as anyone else. Ah yes, universal suffrage, gotta love it…)

Exactly, Rags. Of course, Joe didn’t care about it then.

Trump blamed W for the 9/11 attacks, as they happened on his watch. And during the Republican debates at all places. Jeb jumped in and stood up for his brother. That was probably my turning point when I came to the conclusion that Trump is nothing but a Republican-In-Name-Only.

Again, blaming him for letting it happen is not the same as saying he was involved.

Further, Trump made no insinuation that Obama was involved in this attack. He merely stated that Obama is inept to deal with terrorism or deliberately appeasing a pet interest group of his party.

Funny. trump didn’t say anything that hasn’t been said here many times. In fact he said far less.

WTF are you even talking about…???

JOE SCARBOROUGH has truly gone nuts…………
He and Mika are in attack mode and that is all you will see till the election.

He did nothing but praise Trump during the primary over and over. State what a great person Trump is. What a giving person he is. Lots of people were piss that Joe was supporting Trump. Joe had to on air state that he was not supporting Trump but just telling the truth.

Strange what has happened… wink, wink!

(Who the hell watches that irrelevant, useful idiot other than anyone watching MSNBC?)

All I know is there is a lot of really weird sh.t going on. Has been for a while, far more so under current potus, far more than simple corruption as it has a single ideological direction. I think we’ve long been sold out to the highest bidder. A nasty, evil, islamic mf.

The only way to elevate the current “Political Discourse” is to remove Trump from the GOP and replace him with #ScottWalker2016 & #TedCruzSCOTUS2016.

A true kook-for-Hillary has spoken.

You are “complict” in voting for Trump. How can anyone be more pro-Hillary other to vote for her?

Henry the Parrotlet to you.

You’re a kook. That simple.

Can’t we all just get along? Rodney King

Wasn’t Rodney King that said that.

Rodney King mumbled something about pay me, so I can buy more drugs and drown in my backyard swimming pool.

While I agree with Trump that the Washington Post was wrong to state that Trump said that Obama was “connected” to the terrorist attacks, the fact is Trump’s own ambiguity in his statements opened the door for others to interpret what he meant. He said “we’re led by a man [President Obama], who’s not smart, not tough, or he’s got something else in mind”. That’s a heck of an either or. And he followed it up with “there’s something else going on”, implying that the third alternative, the “something else” was the correct one.

The simplest and most rational explanation in my mind is that Obama cares about terrorism only up to the point where it impacts his own social and economic agenda and other than that, its just not a priority for him. He’s mentioned before that the US could “absorb” another terrorist attack. If Trump has said that, or something equally clear, nobody would be trying to parse his statements or accusing him of veering into conspiracy land. The Great Communicator, Trump certainly isn’t.

Name any republican candidate whose words were not misconstrued by the media.