The underlying reason for the event is that Clinton is barely clinging to a 2-point lead in California polling data, ahead of its June 7th primary.

Based on my observations, the “national security address” at the Prado in Balboa Park was an utterly astonishing failure. Furthermore, the arrangements associated with her appearance show that if she does win, Clinton will extend the Obama imperial style of presidency.

I will begin my analysis with crowd size comparisons:

When I arrived, actually expecting to see the candidate (albeit from a distance), I was shocked to discover that she was speaking in a secured room with a maximum capacity of…200. The building was surrounded by a massive media presence, including the most perfect entity to ever cover Clinton, Flying Cow Satellite Services: 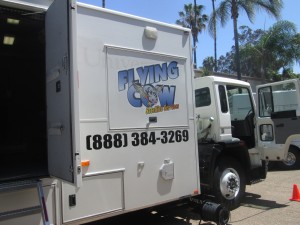 People who did not have tickets (which were only given to elite donors and local politicos) were directed to a small courtyard. A poor-quality sound system was set-up so the outside audience could listen to the address.

There were about 200 people in the courtyard at the peak occupancy.  What struck me most about the arrangement was that people were arranged below the balcony, apparently waiting until Clinton graced them with an appearance. 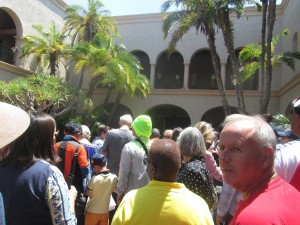 Overheard: “I hope she at least waves to me”. How queenly!

What makes this particular crowd-count difficult is that some in the audience were clearly #NeverHillary.   I would estimate about one-quarter were sporting Trump or Bernie t-shirts/signs.  Here is a sampling:

From a San Diego area veteran, who quickly crafted a sign when he learned Clinton was nearby. 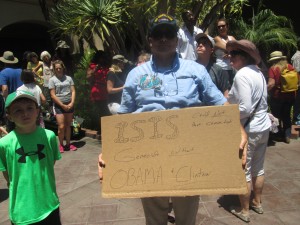 From an woman in Clinton’s key “Women over 60” demographic, who also swiftly created a protest sign. 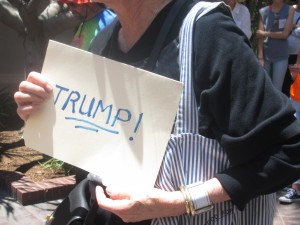 From a millennial contingent, who obviously had more protesting experience than their elders: 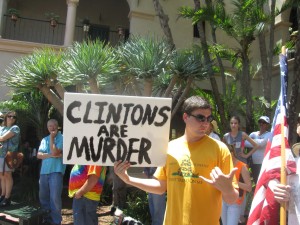 However, there were a few #NeverTrump advocates as well. 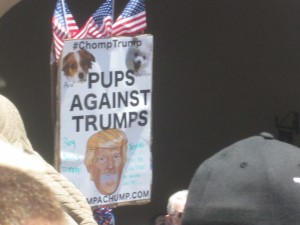 In fact, the bulk of the “national security” address was merely a tirade against Donald Trump. To say that Clinton was scripted would be an understatement. Her address was a droning fantasy, clearly read from a teleprompter, of how awesome her credentials are.

The few times she was enthusiastic and actually showed some spark was when she vigorously attacked Trump — not even ISIS or Iran was the focus of such rhetorical ire. (Full Text Here).

Here is the red-meat she tossed out to her supporters:

However, the real foreign policy material was essentially the cold peas next to that meat. Barry C. Jacobsen, military history expert, has these thoughts about the actual national security aspects of her address:

Let’s take her claims regarding standing-up to Russian aggression, the threat of North Korea, and Chinese expansionism in the South China Sea. What we saw during her tenure as our chief foreign policy agent she famously reset the relationship with Russia… Reset it to the Cold War. Putin was allowed to eat up Crimea, and the Donbas (eastern) region.

Laughably, she asserted, “I am going to keep American security at the heart of my campaign”. That would be a big change from her hackable email, ambassador-killing, enemy-enabling approach we have seen so far!

During the address, a handler came out to “shush” the crowd when they cheered at an attack on Donald Trump. About half-way through the 35-minute address, people began filing out. The crowd size was reduced by at least 1/3rd by the time she wrapped up.

This imperial approach of limiting the general public’s access backfired, big time. When California voters discovered that they wouldn’t be able to actually see Clinton during the address, several were upset.

“This is bullshit,” said Dennis Garrett, a San Diego resident who was undecided before the event, who explained why he was upset:

“I am trying to figure out how to vote for. See who is supporting her, and get a sense of the campaign’s tone. Learn what she wants to do in office. I can’t do it this way.”

Maria Rodriquez, a San Marcos mother who piled the kids in the car and came down to see Clinton, was also upset:

“This just shows Clinton is the elitist that my husband, who’s voting for Sanders, says she is. I was undecided until now. I am going to take the kids to the zoo instead and #FeelTheBern.”

The elite media is doing its best to hide what a bomb this event was. They are highlighting the fact there were few protesters and light security. They are interviewing the area’s Democratic Party glitterati to show she was well-received.

However, inasmuch that Hillary just convinced 2 Californians to vote for her opponent next Tuesday, I will officially file this event under “Full of Fail”.

We’ve got the Queen of Deceit, as yet unindicted. By implication, her partner in crime, also unindicated, the King of Deceit. Then, there’s the guy who reminds me of a sibling of the Wizard of Oz, one from that part of the family no one wants to mention. And, we have the guy who has written all over him: would you really buy a used car from this guy?

This is the best we can do?

True, but unfortunately she is Hillary Clinton, which far, far eclipses that one positive point.

And what about the Mighty Kristol-French Juggernaut Division of NeverTrump?

They were busy hiding their support for Hillary by not attending this event. Those leftist purist GOPe scumbags who don’t care about making America great again(trademark sign.) The real question is if we can get our jobs back from China and Mexico. Or how high will that border wall get by the time it’s built. Another thing I often ponder is who will pay for it.

Thanks Leslie, for another vicarious visit to San Diego. According to the MSM, she had great numbers of enthuastic attendees. It’s so valuable to get the truth from wonderful people like you!

I predicted a year ago she won’t be the nominee. I’ll stick by that prediction.
The dems have screwed themselves. Their best option is probably to take a flyer with Bernie. Anyone else will irritate more people than not.

And here is why: liar dishonest untrustworthy

I bet Biden gets up each morning and kicks himself in the rear.

Rumors continue that Biden may yet be the candidate. My guess is that Trump would be in difficult straights if he did.

Sandy Eggo (H/T to the Late Neptunus Lex) is a military town, full of Sailors and Marines. Why would Hillary Clinton, Dowager Empress of Chappaqua, Former Co-President of the United States desire to be seen amongst these hated troglodytes? Her appearance, message and attitude all scream “I am HILLARY! Hear me roar! (when I’m not coughing)”

The Dowager Empress is acting more and more like a stalking horse for Biden/Warren.

Can’t wait for the election to be over, and be rid of this corrupt, ugly witch and the malignant boy-president.

To be followed by Crazy Commie Bernie, Crooked Hillary or Demented Donald from Orange? I can wait FOUR MORE YEARS!

America cannot take a third term of President Stupid. Anything, even (gulp) Trump, would be a step up.

Flying Cow…perfect description, especially of her tenure at Secretary of State.

What’s “Pups against Trump” has to do with cconservative refusal to vote for Trump?