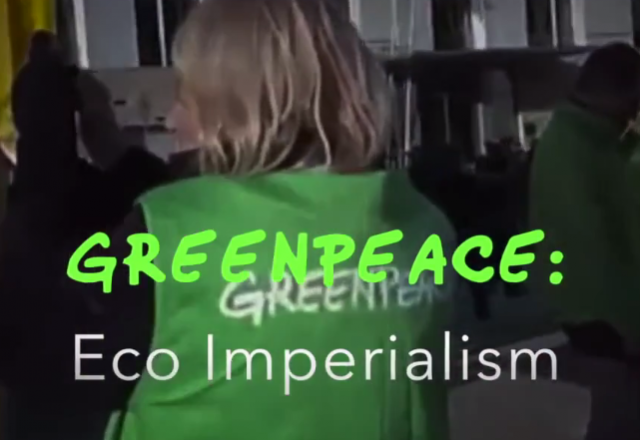 Of course, the eco-activists extraordinaire of Greenpeace were major cheerleaders:

Greenpeace media officer Cassady Sharp called upon the Justice Department to undertake a “broad” investigation to “look into the role of [ExxonMobil and] other fossil fuel companies, trade associations, and think tanks in sowing doubt about the risks of climate change.”

Greenpeace was not the first to call for RICO investigations into those who oppose costly climate change policies. Sen. Sheldon Whitehouse (D-R.I.) made a similar call last year (prompting criticism from home-state press), as have others. Greenpeace may soon have second-thoughts about its embrace of RICO, however.

It looks as if Greenpeace is going to be taking a big sip from the Karma cup! A forest products company just slapped the organization with a RICO lawsuit of its own.

Resolute Forest Products Inc filed a racketeering lawsuit against Greenpeace and some of its associates for its campaign criticizing the company’s forestry practices.

The Montreal, Quebec-based company said in a statement on Tuesday that the complaint, filed with the U.S. District Court for the Southern District Of Georgia, sought compensatory and other damages.

In the campaign, Greenpeace said Resolute, one of the largest producers of newsprint in North America, had destroyed Canada’s Boreal forest and woodland caribou habitat. 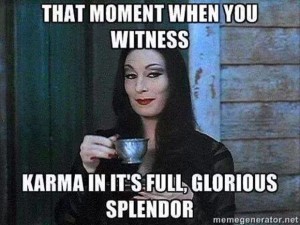 For those of you who, like myself, want more of a synopsis of the lawsuit, an industry publication hits the highlights.

…The complaint describes in detail the falsity of these and other malicious and defamatory accusations. Among other things, the complaint explains that far from being a “forest destroyer,” Resolute has planted well over a billion trees in the Boreal – which is a billion more than Greenpeace – and is responsible for virtually no permanent lost forest acreage.

The complaint also demonstrates that Resolute also has not impaired the Boreal’s ability to absorb greenhouse gases, and, instead, has improved that ability through harvesting and forestation as recognized and encouraged by the U.N. Intergovernmental Panel on Climate Change. Nor has Resolute abandoned, exploited or impoverished First Nations or other communities within the Boreal forest, but instead – and again unlike Greenpeace – has created and sustained substantial benefits for these peoples through shared economic participation in the forestry business.

The complaint also details how, to support its false accusations, Greenpeace has fabricated evidence and events, including, for example, staged photos falsely purporting to show Resolute logging in prohibited areas and as having harvested areas that were actually impacted by fire.

“Our company strives for the highest standards of environmental stewardship, which is why the attacks on us are so obviously cynical and thoroughly irresponsible. We have an obligation to our business ethics, and our many shareholders, customers, partners and stakeholders to draw the line after all other means have been exhausted,” stated Richard Garneau, Resolute’s President and Chief Executive Officer.

Cynical and irresponsible attacks are Greenpeace specialties! A glace at the Resolute: Forest Destroyer page from Greenpeace contains so many wild claims that it should be a rich source of evidence for the firm’s legal team.

Resolute is seeking compensatory damages in an amount to be proven at trial as well as punitive damages. Let’s hope the firm wins…Big Time!

Karma is a drink best served hot…to add to the global warming profile, of course.

A nice counter-lawsuit to force them to open their books sounds like a great idea!

The interrogatories and the depositions should be substantially entertaining.

Should do that to all of the eco-terrorist outfits, starting with the Sierra Club.

Just FYI – the forest goes through cycles. When we stop forest fires we interrupt those cycles.

Some creatures require young forests. In Michigan the Graylings Warbler only nests in red pine trees less than 20 years old. When the local forests got to old the warblers numbers plummeted. Forests had to be clear cut and burned to create new warbler habitat.

Trees are crops, and forests just great big fields. Often, the soil is too poor to support anything BUT trees and brush.

Forestry companies are generally the very best stewards of their holdings, because they need those forests replenished.

But the nutters of the enviro movements invent new things to damn them with, such as “factory forests” to slime fast-growing, disease-resistant trees.

It will always be something, because it’s mostly all based on a fantasy.

Around here (Pacific NW), Weyerhauser is the big name in forestry and related products. They have long replanted at least one tree for every one they take down. The environmentalists credit Oregon state law that requires replanting, but the truth is Weyerhauser was replanting long before the law requiring it was ever dreamed up.

“Land stewardship” (a worthy goal in itself) aside, it’s simple business: if you clear-cut and don’t replant, in 10-20 years you won’t have anything left to cut, and your business is finished (we’ve all seen that movie, The Lorax, right?). If you want your company to stand long-term, you have to make sure the raw goods you use will be available for generations to come. In the case of trees, that means replanting the areas you’ve harvested.

It’s a beautiful day in the neighborhood!

Sadly the media will ignore this.

Does anybody know if the company is accepting donations for its litigation costs?

This sure makes me smile! Having them do a little jail time wouldn’t hurt my feelings either.

I wonder how some the IRS will do an audit of Resolute Forest Products.