France takes steps to protect itself as millions from around the world swarm into the country. 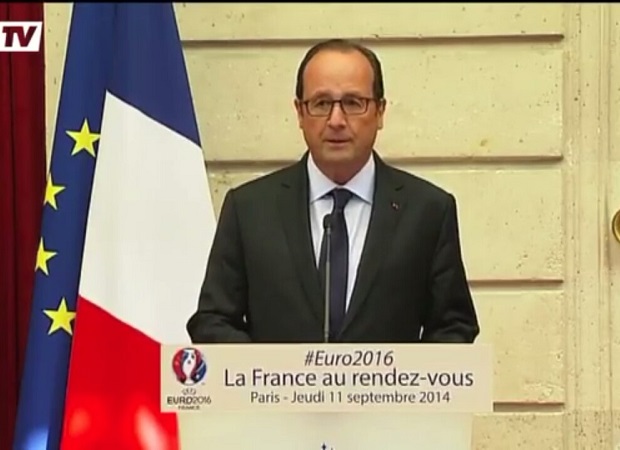 Despite massive security measures, dubbed by the French news agency AFP as a “State of Emergency”, the authorities in France remain fearful of a new wave of Islamist terror during the European soccer tournament Euro 2016 — due to start this week. Over a million soccer fans from all across Europe are expected to visit France during the month long sporting event.

France’s President Francois Hollande admitted the likelihood of fresh terrorist attacks during Euro 2016, saying that the Islamist threat “will unfortunately be there for a long time,” even as he refused to be “intimidated” by it.

The European soccer championship is being held just six months after a group of suicide bombers tried to enter a stadium in Paris packed with thousands of fans during a soccer match between Germany and France. Despite the foiled attempt, terrorists, owing allegiance Islamic Caliphate (ISIS), killed around 130 people in Paris, arguably one of the most deadly Islamist attacks Europe had ever witnessed.

Millions of foreign visitors, holidaymakers and sporting fans as well as the world’s press are set to descend on the country in the next month — creating endless nightmares for its overstretched security services. (…)

President Francois Hollande acknowledged the threat on Sunday, though he tried to put a brave face on it.

“This threat will last for a long time, unfortunately, so we must do everything to ensure that the Euro 2016 is a success,” he told France Inter radio.

Hollande’s government introduced a state of emergency in the wake of last year’s jihadist attacks in Paris, allowing police to raid homes and place people under house arrest with minimal oversight. (…)

But the challenge of monitoring those who have returned from Syria and Iraq, or who have snuck into Europe using false passports or with the influx of refugees, has overwhelmed the continent’s security services.

The acknowledgement by the French President comes on the heels of a German police report warning of “possible Islamist attacks at the Euro 2016.” According to the report, Islamic State wants to hit “symbolic and soft targets” in France to get huge “media attention” and “high expected number of victims” during the tournament. German police believes that not only fans but also the participating national teams are on the crosshairs of the jihadists.

The recent French and German terror alters are not unfounded. Early this weeks, French intelligence agency revealed that 82 persons hired to provide extra security at Euro 2016 were on the country’s terror watch list. Many of these hired “security guards” had proven links to “extremist groups”, French media said.

Overwhelmed by the migrant influx, European security agencies are unable to monitor the movements of Islamists crisscrossing Europe. In 2015, Germany alone officially accepted more than a million migrants, mainly young men from Arab and Muslim countries. According to the government figures leaked to German media, country’s Interior Ministry estimates that additionally some half a million unregistered migrants might have entered Germany, making it impossible for law enforcement and counter-terrorism agencies to keep track of Islamist sympathisers among the new arrivals.

With European governments failing the cut Islamic State’s supply line running deep into European heartland in the name of “open borders” and European leaders willing to play “Syrian Roulette” with the lives of their citizens, the next major terror attack on the European soil — as painful it may be to admit — is just a matter of time.

Author is an analyst based in Germany

Stay away from France this summer.

We are. Touring the heartland to see how the pioneers settled this land.

Interesting the podium sign refers to 9.11.14, a chilling reminder of a previous rendez-vous with destiny.