This is every vegan I’ve ever met 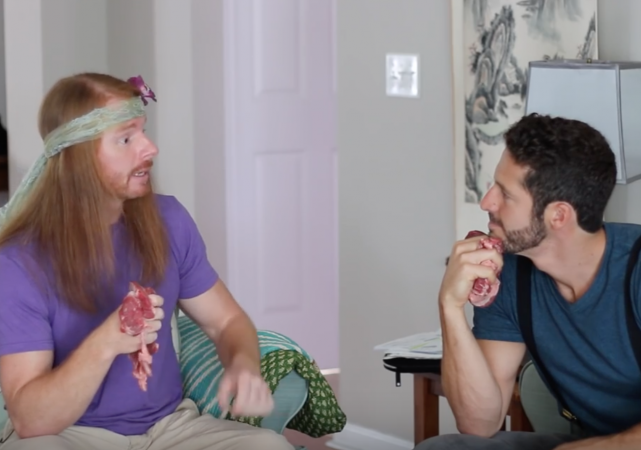 Vegans. We all know at least one. We’ve all been stuck listening as they chirp from their morally superior perch about the evils of carnivorous living. Yes, there exist vegans who aren’t the most annoying people we know, but those are few and far between.

So, what would life be like if all of us steak eaters acted about our filet mignons how vegans act about their organic, free-range kale?

The internet seems to like this little video as much as I do. Released yesterday, it has almost 800,000 views on Youtube and over 30 million on Facebook.

As the always anonymous “they” says, “it’s funny because it’s true.”

Watching this video adds red meat to the debate on why one shouldn’t drink the kool aid!

I’m going to obey my dentition, and stay an omnivore.

Aha! Proof at last. I knew lawyers would snap at anything! 🙄

Hey, I go for the jugular! Always to the heart of the matter…and I don’t mean celery or artichoke!

How can you tell if someone is a vegan?

Just wait a little bit and they will tell you.

How many vegans are there that are only vegans to get to sleep with a vegan?

No Justice, No Peas

Peas relish me let me go.

Good night, Mrs. Calabash…wherever you are…

ah, but how do you feel about broccoli?

Assume a contemplative lotus blossom or half lotus position.
Take a deep, relaxing breath, and say with me “Ommmmmm-nivore”.
Now let’s go get a bacon cheeseburger topped with grilled onions and say with me “Mmmmmmm”.

As someone who’s had more than my fair share of illness I’m always amazed at how people will risk their good health to try to achieve some sort of mythic health nirvana. From athletes taking steroids to secretaries jumping on a juice diet fad to drop a size to college kids going vegan because their friends do its all the same thing to me – a gamble with something almost irreplaceable. If you can keep up with your kids (or nieces, nephews, cousins, friend’s kids, etc) running around on a soccer field for an hour then don’t change anything.

If God had wanted us to be vegan, he would have made broccoli more fun to shoot.