Wasserman Schultz: Hillary emailed like other Secretaries of State (except for the private server part)

Wasserman Schultz: Hillary emailed like other Secretaries of State (except for the private server part)

Another Dem talking point goes up in flames 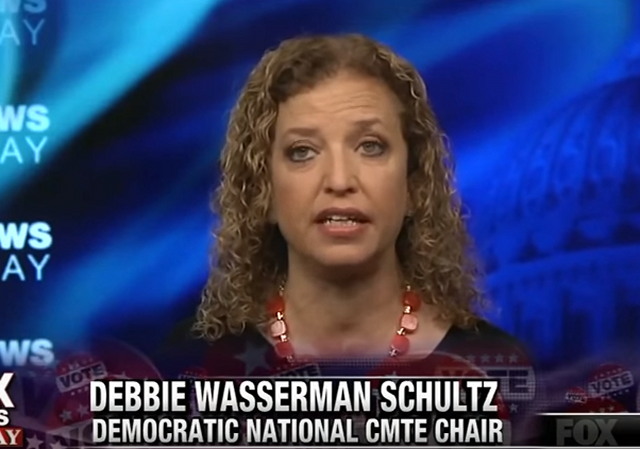 Host Chris Wallace called her out for innacurate comparisons to other officials.

Schultz: Clinton Used Private Email The Same Way as Previous Secretaries of State … ‘Other Than the Private Server’

Fox host Chris Wallace closed his interview with her by asking about her prior dismissal of the email allegations against Clinton.

“I’m simply confident that as the investigation continues that Hillary Clinton has made it clear, and there are scores of individuals who are associated with the federal government that have indicated that it’s clear that she conducted herself completely legally, that she was able to use private email just like previous Republican and Democratic secretaries of state, and I think that at the end of the day this is going to amount to nothing more than an investigation when they take a close look,” she said. “I think she’s going to be fine.”

Wallace pointed out the FBI had dozens of agents that had investigated the issue for months, adding Director James Comey revealed the probe could potentially go past this summer’s Democratic Convention.

“Are you saying it’s all a waste of time?” Wallace asked.

“I’m not commenting on it one way or the other, other than to say—” Schultz started.

“Wait a minute, you have. You said it’s ludicrous,” Wallace said.

Schultz said Clinton had used private email “in the same way that previous secretaries of state have done.”

“Other than the private server,” Schultz said.

Despite Schulz’s “nothing to see here” approach to the scandal, things could get much worse.

The FBI could leak internal reports of its investigation into Hillary Clinton’s use of a home-brewed email server if the Obama administration stifles the inquiry, Sen. Chuck Grassley warned on Friday.

A hypothetical leak could occur, he said, if officials believed Clinton was not being prosecuted for political reasons.

“And if there’s political interference, then I assume that somebody in the FBI is going to leak these reports and it’s either going to have an effect politically or it’s going to lead to prosecution if there’s enough evidence,” he said.

“Other than the private server” could become famous last words.

For me, the problem with this scandal is that it demonstrates that a potential presidential candidate is careless with the lives of those who serve our country.

Sometimes there is a down-side to hiring the (mentally) handicapped…

We should laud the DNC for hiring from sheltered workshops.

Hey didn’t Obama just tell 60 minutes that Hillary is innocent of any violations. Maybe she made a few bonehead decisions but nothing that put the security of America at risk. And the same for the IRS, and Fast and Furious, and remember Obamacare was going to save us all $2500 per year. So why even consider that Hillary broke any laws. There’s not a smidgeon of evidence against her. Case closed. Nothing to see here.

Other than the felony, she did nothing wrong.

Apart from the sanitation, the medicine, education, wine, public order, irrigation, roads, a fresh water system, and public health, what have the Romans ever done for us?

At least Stan gets to be Loretta now.

It’s like OJ saying, “Other than the dead body, I did not kill my wife.”

It appears the impossible has happened: she gotten even dumber looking and is even saying dumber things – for consumption, of course, by our nation’s most addled.

The smoking gun is that Hillary mingled State business with The Clinton Foundation fundraising for personal gain….! She was running a “pay to play” scheme THROUGH HER PRIVATE SERVER for a reason….and that reason was so she wouldn’t GET CAUGHT…!! And guess what? Hillary made out like the criminal bandit she is….!!!

The classic formation is

“Outside of that, Mrs. Lincoln, how did you like the rest of the play?”

Should there be a subpoena for those emails that DWS received?

Kind of makes one wonder how many of those Clintoon emailed that DWS got and sent the Hildabeast private server.

It’s just amazing how the progressive fascists are in denial. They refuse to consider the thousands of felonys Hillary committed and how she betrayed our country.