A group of Palestinians led by professional provocateur and propagandist Bassem Al-Tamimi has filed suit against a slew of Americans, American businesses, American organizations, international businesses and Israeli entities.  The Complaint is embedded at the bottom of this post.

Altogether nineteen Plaintiffs have brought claims against fifty-three defendants.  Plaintiffs’ attorneys are Martin F. McMahon, a colleague in his law firm, and Sameer Jarrah, who claims a license to practice law in Jordan.

Al-Tamimi is a familiar figure.  He is at the heart of LI’s ongoing battle with Ithica, New York’s public school system (where he encouraged third-graders to become “freedom fighters for Palestine”), peddles the blood libel that Israel harvests and sells Palestinians’ organs, and uses his own daughter (and other children) as props in his war against Israel (more here).

The Complaint is 186 pages, plus exhibits, and will take some time to study.  The predicate for the Complaint, though, is summarized at Paragraph 87:

(a) the settlement enterprise has been an  intentional, profitable, and ongoing activity for at least 40 years; (b) it entailed the expulsion of approximately 400,000 Palestinians from the OPT; (c) it also resulted in the demolition or confiscation of 49,000 Palestinian homes; (d) without the massive financial assistance provided by U.S. donors/entities, settlement expansion would have been impossible; (e) in providing that critical funding, U.S. donors/entities have violated numerous Treasury tax-exemption regulations and at least eight federal criminal statutes; (f) as a result of funding that criminal activity, they are all subject to criminal prosecution for their money laundering and arms-trafficking activity; and finally (g) at least eight U.S. Presidents, their Secretaries of State, and congressional leadership have all unequivocally and repeatedly condemned settlement expansion and its violent consequences for almost 40 years.

The claims are broad: Civil conspiracy; war crimes, crimes against humanity, and genocide; aggravated and ongoing trespass; RICO, and; war crime of pillage.  Even aside from the lack of any factual support, Plaintiffs confront serious technical and legal challenges which we will explore in later posts.

Readers should view this primarily as a political lawsuit. Much like Tamimi’s use of children to confront Israeli soldiers in order to create viral media images: 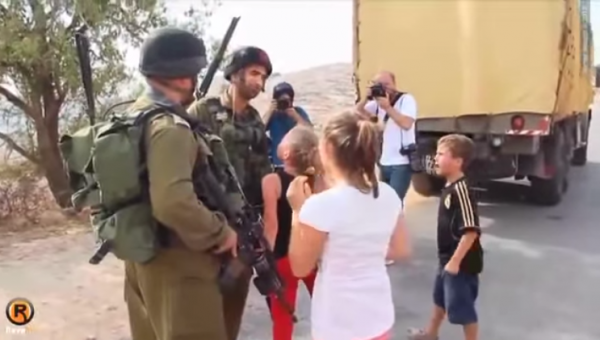 I’m no expert in legal matters, but browsing through the document I saw that it’s filled with lots of footnotes to various anti-Israel websites rather than to reliable or reputable sources. It suit looks like nonsense to me.

How this does not get thrown out on sight, with sanctions? Can someone with real-world legal experience explain how a real law firm, with rent to pay and clients to represent, could think that a filing like this will not result in sanctions?

Getting a complaint dismissed as “frivolous” is extremely difficult. You wouldn’t believe the nonsense that defendants/the courts have to deal with- especially the semi-coherent rantings from prisoners representing themselves in civil rights / cruel and unusual punishment actions. This is primarily a publicity stunt, and unfortunately the system isn’t designed to screen those out if the Complaint includes some viable legal theory (facts don’t matter at this phase).

On the plus side, if the suit survives, the plaintiffs will be subject to discovery also… each of them would be required to submit to depositions under oath.

Do you really think that a muslim would hesitate to lie under oath to advance the cause of islam? They have a name for it -taqikka or something similar – it is so common.

They would certainly hesitate when they’re under penalty of perjury.

A Palestinian assailant killed an American tourist today and wounded at least 10 other victims in a stabbing spree that began in southern Tel Aviv’s Jaffa Port, in the third attack within a number of hours on Tuesday evening.

Also on Tuesday, a Palestinian stabbed an ultra-Orthodox Jew in a liquor store in Petah Tikva near Tel Aviv.

There were four separate assaults Tuesday.

Two occurred in Jerusalem, including one that saw a Palestinian shoot and seriously wound two Israeli police officers before being shot dead.

Question: “Is this appropriate for children that age”
Answer: “My children are the same age and I teach them this . . .”

Parts of this suit may well be frivolous. Other claims, such as the claim to the war crime of pillage, and violations of RICO, may well be actionable. I strongly suggest that defendants BEWARE!