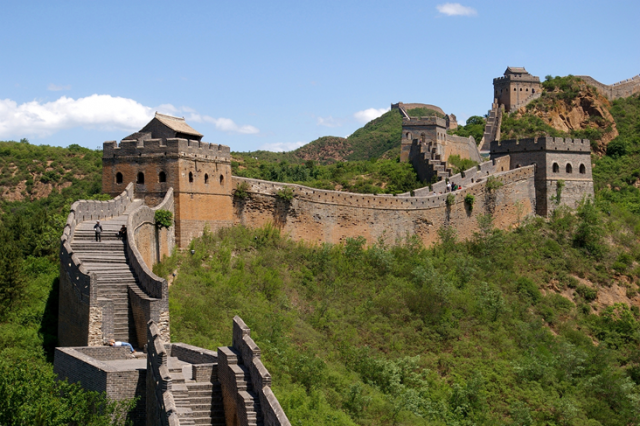 Several savvy Legal Insurrection readers noted that Californians who flee our progressive paradise have the nasty tendency to take their politics with them.

In light of the success business mogul and pugnacious political candidate Donald Trump has had in the GOP primary, Governor Jerry Brown may have stumbled upon a solution that should bring joy to many Americans.

Gov. Jerry Brown, mocking Donald Trump for his plan to build a wall along the U.S.-Mexico border, suggested Monday that if the Republican frontrunner wins the election, California might have to take protective measures of its own.

“If Trump were ever elected, we’d have to build a wall around California to defend ourselves from the rest of this country,” Brown told labor organizers at a dinner in Sacramento.

This idea may now have a lot more appeal to the citizens in our remaining 56 states, as the Golden State’s crime rate has spiked.

Preliminary data from the FBI offer discouraging news about crime trends in California’s largest cities. A number of cities—such as Los Angeles, Sacramento, and Riverside—reported increases in violent crime in 2015. The recently released FBI data also show that California cities are seeing property crime increases. These increases, particularly in property crime, are widespread and not trivial in magnitude. However, the data also show that cities in other states are also experiencing increases, especially in violent crime.

The reason for the jump? California voters passed Proposition 47, after they were promised it would be a cost-saving measure that wouldn’t have a significant impact on crime.

What it actually achieved was reversing the successes associated with “three strikes” measures that had been in place.

The measure was approved at the ballot box in 2014 and downgraded many nonviolent offenses like property crimes and simple drug offenses from felonies to misdemeanors, part of an effort to reduce prison over-crowding in the state.

But as the measure has been implemented, several police departments have reported a spike in shop-lifting and auto theft, among other crimes, and in part blame Prop 47.

“In the past year and a half, we’ve seen an increase in theft-related crimes, including robbery, burglary, and identity theft,” said Sgt. Tasha Descosta, with the Hayward Police Department.

And if all this were not bad enough, just in time for Easter, the Democrats in Sacramento want to create a new tax…on candy.

[Assemblywoman Cristina] Garcia, D-Bell Gardens, has already introduced legislation to lift taxes on feminine hygiene products like tampons and pads, arguing the fees burden women who have little choice in making those purchases.

In pushing for that bill, Garcia and allies have argued that California’s tax code already exempts many products, including yoga classes, farm equipment, medication – and candy. Now she wants to reimpose a sales tax on sweet treats and snack food.

Californians overwhelmingly voted to exempt candy and snack foods from sales tax by passing Proposition 163 in 1992, so Garcia’s measure is a constitutional amendment that would need to win a two-thirds vote in the Legislature and then be approved by voters.

Personally, I will be leading to charge against the measure if it should hit the ballot.

A Chinese firm recently purchased a number of American hotels, including the historic Hotel Del Coronado. Perhaps we can get the Chinese to send over a portion of the Great Wall in an exchange!

That might be one deal with China that Trump would approve very enthusiastically.

Here in Tennessee we find that the incoming refugees from the “California Madness,” their term, make pretty good neighbors once they break the old California way of doing things. This primarily consists of relearning that they themselves are the first rather than the resort to solving their own problems.

I think they need a wall to keep them in rather than one to keep us out.

Sort of “Escape from New York” walling in the crazies and criminals.
Hey..can we move elected officials from D.C. there too? At California’s expense, of course.

After all, California is all about spending money on projects designed to fail.

I would be happy to contribute to the Great California Pen.

Another reason to vote for Trump!

Good. We may be able to stop the Californication of the US.

Whose taxes are they going to increase to pay for it?

Heck…let them build a wall, if they start it across their southern border with Mexico first.

No problem, I suppose that means Cali is willing to give up water rights in the Colorado river as well? 🙂 Good riddance.

I’m shocked…shocked….that I’m just not feelin’ the love for my home state! 😀

Well, Leslie, your governor wants to build a wall between us.

I don’t think he likes us!

Build that wall nice and high, Moonbat! Maybe the rest of the states will push your wall westward until it becomes very, very wet.

Preliminary data from the FBI offer discouraging news about crime trends in California’s largest cities. A number of cities—such as Los Angeles, Sacramento, and Riverside—reported increases in violent crime in 2015.
————-
Said it before, dems – the party representing their constituents – the criminal class.
How else could hitlery be the leading candidate? Surprised she returned the WH furniture. dems just don’t care about laws as long as she leaves them a few crumbs.

The wall will be easier than Jerry thought.

Northern California (the true north) wants to secede and become the state of “Jefferson”. That makes the wall shorter right there.

Central California is hurting bad and is angry with the coastal elites, particularly the SF/LA ninnies who keep ruining the rest of the state. Make the centralistos an offer and they might break away (their official languages would be both English and “Valley”). And the San Diego region is actually fairly Republican.

So the wall go from San Francisco, loop up north to include Sacramento, down past Oakland, and then hug the Sierra Madres all the way the LA basin. Swing it out east to Riverside and south to the sea around San Clemente.

That doesn’t look so hard. Particularly if you knock down the aqueducts along the way…

Just run that wall N-S in the I-5 corridor from the “Jefferson” counties in the north to the Mexican border, skewing east to avoid the LA-San Diego regions. All of us will be happier and I won’t have to move. The “East Cali” folk will easily adjust Sacramento once it is cut off from its breeder bases in SF and LA.

Cheaper to build, too: all that immigrant labor and the terrain is pretty even. Moving it to the NV border creates a serious terrain issue

Oh. And the coastal folk can keep that damn train…

I’m sure kids will be busting their piggy banks to end the threat of California. I watched my state be ruined by them. They are like locusts and vote the same stale politics that ruined California.

Let them go. Build a moat and fill it with great white sharks. Build a mine field and an electric fence. Whatever it takes to isolate the cancer from the rest of the body.

Now if they just built a taller one around NY and DC we’d all sleep better at night.

It should be cheap since sanctuary Cali won’t check the citizenship status of the workers.

If this wall were ever built, I have to believe that it would be in the same spirit as the Berlin Wall – to keep those yearning to be free from escaping.