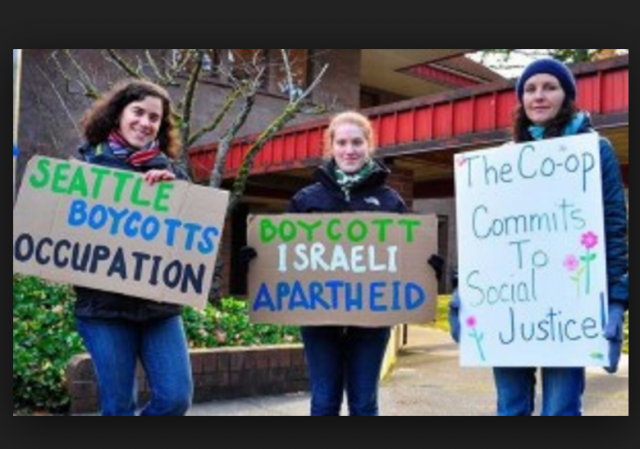 Supporters of the anti-Israel Boycott, Divestment and Sanctions (BDS) scored a big win many years ago when they managed to pass a boycott of Israeli products at the Olympia Food Coop in Olympia, Washington.

It was the first such successful coop boycott, and I believe either the only one or one of only a very small number.

After the Olympia BDS policy was adopted, numerous members sued. That suit originally was thrown out of court, but in May 2015 the Washington State Supreme Court reversed. We reported at the time, a Big Win for Washington anti-BDS Activists:

Members of the Olympia Food Cooperative sued the Co Op’s board after board members decided to protest Israel’s alleged human rights violations via a Co Op-wide boycott of Israeli-made products. Plaintiffs claimed that the boycott violated the Co Op’s own boycott policy; the board, however, invoked Washington’s anti-SLAPP statute, claiming that the plaintiffs had filed a frivolous lawsuit as a way of suppressing public discussion. The plaintiff group was SLAPPed (I had to) with over $200,000 in fines and penalties, but appealed, claiming the SLAPP statute itself was unconstitutional.

The case went all the way to the Washington Supreme Court, which held that Washington’s unique SLAPP language “creates a truncated adjudication of the merits of a plaintiff’s claim, including nonfrivolous factual issues, without a trial. Such a procedure invades the jury’s essential role of deciding debatable questions of fact.” This, they said, violates the Washington State Constitution.

That win in striking down the anti-SLAPP law merely meant the lawsuit could move forward in a normal manner. Part of that normal manner was another motion to dismiss the lawsuit by the Coop.

A long-running lawsuit involving the Olympia Food Co-op will remain in court.

The lawsuit, filed by five Olympia Food Co-op members in 2011, alleges that the co-op’s board enacted the boycott of Israeli goods in violation of its own policies because it did not first reach consensus among its members. The defendants are 16 people who served on the co-op board at the time of or after the boycott was adopted.

The case was remanded back to the local court in May 2015 after the Supreme Court struck down the state’s anti-SLAPP (strategic lawsuit against public participation) statute, which allowed many speech-based cases to be thrown out early in the process….

With the Supreme Court’s decision, the case has been brought back to square one. No trial date has been set.

There have been a string of losses in the courts for BDS lately. Let’s hope it keeps up.

Does this mean you are SLAAP Happy too? 😀 ( Had too also )