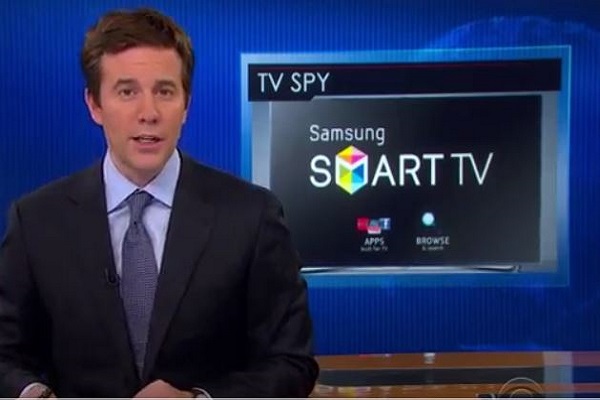 So far, it’s not Big Brother listening to your every word, but someone may be . . . if you have a Smart TV or other internet-connected devices

A year ago, Samsung confirmed that their Smart TVs are indeed listening in on everything you say and do and is warning customers to avoid discussing personal topics in front of their Smart TV. The Week reported in February 2015:

Samsung has confirmed that its “smart TV” sets are listening to customers’ every word, and the company is warning customers not to speak about personal information while near the TV sets.

The company revealed that the voice activation feature on its smart TVs will capture all nearby conversations. The TV sets can share the information, including sensitive data, with Samsung as well as third-party services.

The news comes after Shane Harris at The Daily Beast pointed out a troubling line in Samsung’s privacy policy: “Please be aware that if your spoken words include personal or other sensitive information, that information will be among the data captured and transmitted to a third party.”

Samsung issued a statement about the ability of consumers to control the voice activation that enables the recording and storage of all voice communication in the range of the Smart TV.

Samsung has now issued a new statement clarifying how the voice activation feature works. “If a consumer consents and uses the voice recognition feature, voice data is provided to a third party during a requested voice command search,” Samsung said in a statement. “At that time, the voice data is sent to a server, which searches for the requested content then returns the desired content to the TV.”

The company added that it does not retain or sell the voice data, but it didn’t name the third party that translates users’ speech.

Consumer Reports had a helpful article about how to turn off these “snooping” features on your Smart TV (or phone).

If that were all there were to the issue, it could be filed away in the memory bank.

But, as the Guardian reports this past week, Smart TVs and similar internet-linked devices are a prime target of government snoops, The internet of things: how your TV, car and toys could spy on you:

Can your smart TV spy on you? Absolutely, says the US director of national intelligence. The ever-widening array of “smart” web-enabled devices pundits have dubbed the internet of things [IoT] is a welcome gift to intelligence officials and law enforcement, according to director James Clapper.

“In the future, intelligence services might use the [internet of things] for identification, surveillance, monitoring, location tracking, and targeting for recruitment, or to gain access to networks or user credentials,” Clapper told the Senate in public testimony on Tuesday.

As a category, the internet of things is useful to eavesdroppers both official and unofficial for a variety of reasons, the main one being the leakiness of the data. “[O]ne helpful feature for surveillance is that private sector IoT generally blabs a lot, routinely into some server, somewhere,” said Lee Tien, a senior staff attorney at the Electronic Frontier Foundation. “That data blabbing can be insecure in the air, or obtained from storage.”

Computerworld further reports, Government may tap into your IoT gadgets and use your smart devices to spy on you:

A Harvard report no sooner debunked the FBI’s “Going Dark” argument than the U.S. intelligence chief admitted the government might use your “smart” internet-connected devices to spy on you.

“Smart” devices incorporated into the electric grid, vehicles—including autonomous vehicles—and household appliances are improving efficiency, energy conservation, and convenience. However, security industry analysts have demonstrated that many of these new systems can threaten data privacy, data integrity, or continuity of services. In the future, intelligence services might use the IoT for identification, surveillance, monitoring, location tracking, and targeting for recruitment, or to gain access to networks or user credentials.

Clapper’s prepared testimony about spying via IoT were included in the “Worldwide Threat Assessment of the U.S. Intelligence Community” report (pdf) delivered to the Senate Armed Services Committee on February 9. The Internet of Things was the first topic mentioned under “cyber and technology,” followed by artificial intelligence, although the report notes that the order of topics doesn’t necessarily mean the intelligence community views the topic as the most important.

Why will they need spy appliances? They’ll just take evidence if they see it. Wisconsin has already done away with the 4th Amendment!

The Three Laws of Thermosecurity:

The desire of security officials for information will continue liniarly to infinity.

The willingness of those in authority over security officials to provide resources is finite.

The information assembled by security officials invariably overwhelms their ability to analyze the information.

The Hacking Team ie outsource it.

It’s perfectly OK for Big Business to spy on you in order to steal a buck, but God forbid the government collect intelligence!

With untethered government you are kept on a short lease. You lose choice. You are coerced and spied on to stay in line. Catch the difference?

Business and private actors do not have coercive power. You get to voluntarily choose if you wan to buy the “smart devices”. The information they gather can only be used to try to persuade you to buy other goods and services they think you may want or need. But they can’t force you. For example, information has been collected on me so that when I visit Legal Insurrection the ad server often displays a picture of hideously looking giant toe with ugly yellow nails and a caption that reads, “This Man Cured His Toe Fungus in 10 Minutes And He’ll Show You How”. I’m not exactly sure why the algorithm thinks I am in the market for a cure for toe fungus. Maybe my age (54). Or people in my zip code or area code buy a lot of toe fungus remedies. I don’t remember ever reading an online article in which toe fungus was the main subject or Googling about toe fungus, but for some reason the ad sever believes I want or need a solution for toe fungus. It is an ugly and annoying ad. But nobody forces me to come here. I come by choice.

Government, on the other hand, has a monopoly on coercion. It can use the information for lots of benign reasons, many that are beneficial. But with its monopoly on force it can also use that data to bully or target people whose views it does not like. There are so many laws and regulations on the books that if the government decides it wants to deprive you of your property and/or liberty, it will find a reason.

That’s worse than having to look a picture of an ugly toe.

Winston tried in vain to circumvent the telescreen system.

I put my private server, my smart phone, my smart TV, my driverless car, my X-Box – all my devices – in the bathroom. It’s getting just a bit cramped. And the e-devices don’t like moisture. So…

I think I’ll buy a cone of silence. In fact I think I’ll have to invent one and do an IPO in a year. Get in now while you can. Get Smart.

My methodology, of course, is derived from Hillary Clinton Living, the magazine.

I will release my metadata after I am nominated for POTUS unless forced to do it on a Friday night before a holiday weekend at 11:59 pm.

Just stick a wad of chewing gum over the mic hole. Problem solved.

And a Post-It on the camera eye.

Other than that, put a cardboard figure of yourself in front of the eye and play a recording of Kashmir right into the mic.

Coming next, mandatory morning calisthenics led by none other than Michelle Obama. Oh wait, that was just a plot device in 1984. Nevermind, nothing to worry about with these TVs.

What we have is a gov more afraid of its citizens than it is of foreign invaders.

As a professional technical person, I am seeing more and more lousy IoT implementations that by default open up giant security holes in consumer devices. Very cheap components are easily integrated into anything by inexperienced Engineers. It’s going to get worse and the govt will be sure to take advantage.

Those who give up liberty for security….
Read an article that even going through Windows 10 and turning off all the spyware won’t stop Windows from spying on you anyway.

So as the rest of the world transitions into Microsoft’s latest operating system (with the slick “helping hand” of Microsoft by including Windows 10 in Windows Update), Microsoft will have even more access to users’ data with tracking features even the company itself can’t stop. Moreover, the Redmond-based company says its ability to track users is actually for the user’s benefit, too.

It’s interesting that the TV isn’t smart at all. It is merely a listening device and a conduit. I wonder if that could set them up for a suit over the misrepresentation of their product?