EPA’s top-paid employee motivated by “greed” and “sense of excitement” in 2013 conviction. 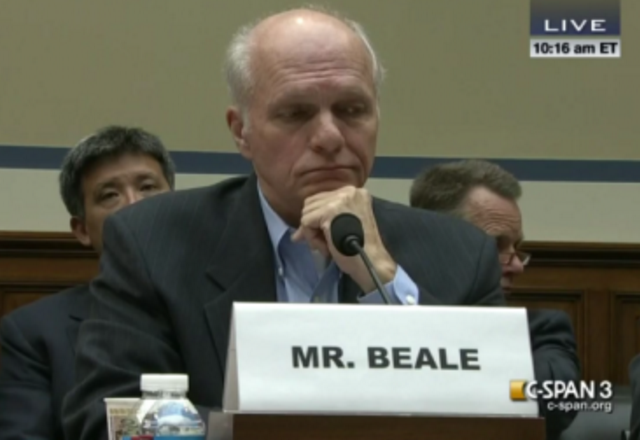 The EPA has been hit with a veritable flood of scandals recently.

We covered the Animas River spill, caused by the EPA’s rush to solve a non-problem involving a mine’s wastewater, which impacted the water quality for several Western states.

In 2013, one climate change expert who posed as a CIA operative was jailed for conning the agency out of nearly $1 Million.

At least Beale was candid about his motivation!

“Why did I do this? Greed – simple greed – and I’m ashamed of that greed,” Beale told the court. He also said it was possible that he got a “rush” and a “sense of excitement” by telling people he was worked for the CIA. “It was something like an addiction,” he said.

Beale pled guilty in September to bilking the government out of nearly $1 million in salary and other benefits over a decade. He perpetrated his fraud largely by failing to show up at the EPA for months at a time, including one 18-month stretch starting in June 2011 when he did “absolutely no work,” as his lawyer acknowledged in a sentencing memo filed last week.

He billed taxpayers for 33 plane flights between 2003 and 2011, including personal trips to London and California, which he flew first class. He stayed in five-star hotels and billed the government for expensive meals and limo rides. The total cost: more than $266,000.

He also publicly ‘retired,’ but managed to continue drawing his $206,000 salary for 18 months – despite brazenly throwing a retirement party for himself that was attended by [EPA Administrator Gina] McCarthy.

He even lied and said he had contracted malaria while serving in the Vietnam War in order to get a handicapped parking spot. He neither had malaria nor served in Vietnam, according to prosecutors.

He should have rethought his guest list for the retirement party. McCarthy, Beale’s boss for nearly the entire 13 years of his fraud within the agency, noticed he was on the payroll nearly six months after the festivities. Subsequently, she called for the investigation that ultimately led to this sentencing.

But at least he didn’t store classified information in a non-secure, private server, then release the incriminating evidence on New Years Eve!

[Note: Text and title clarified as to year of conviction]

except for the fact that it has occurred under the Obama Administration, in which this fraud and deception appear to be “business as usual.” […] He billed taxpayers for 33 plane flights between 2003 and 2011,

Only 3 of those 9 years were under 0bama. And it was McCarthy who eventually caught him.

Climate change itself is a moral hazard that INVITES fraud.

Is the U.S. suing Beale to recover the $? My climate needs changing.

And, has the GSA had any Las Vegas conventions lately? You know how those undercover agents are.

Good, cons like this need to be caught and prosecuted whenever possible because the money he conned the gov into paying him ultimately came from us – the taxpayers. The government is wasteful enough as is without cr*p like this going on as well!

Probably half of Gummint “employees” fit his description in some form or fashion.

The fake Vietnam War record is also maybe another “tell”

His entire job and career at the EPA was a con.

He got to be the highest paid employee?

What else was going on? What else was he doing and who was he in league with? (somebody involved had control of the payroll records)

The post-retirement pay obviously wasn’t his only con. It was maybe his last con. But unlike the others, not backed up by paper records, or he wasn’t around to intercept problems.

And not a peep of this from the corrupt American news media.

Read this and weep. And weep some more.

The most corrupt administration in living memory and yet commenters like Milhouse will continue to justify, excuse and vote for more of the same.
0bama and his minions are not the cause but a malignant result of attitudes like the one Milhouse exposes.