As 1-in-3 Californians now on program for poor, Medi-Cal faces civil rights complaint. 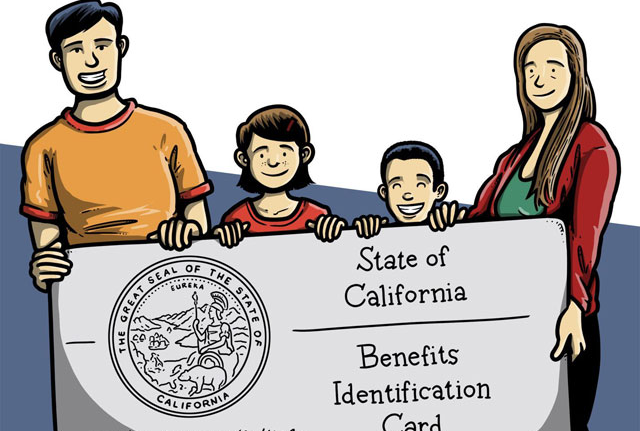 One 2016 prediction is very easy to make: Obamacare will continue its trajectory of failure.

For example, Covered California has been heralded as one of the greatest state exchange successes for the “Affordable Care Act”.

The reality is that one-third of California’s residents are now using a system that was initially intended for the low income families.

The state’s health plan for the poor, known as Medi-Cal, now covers 12.7 million people, 1 of every 3 Californians.

If Medi-Cal were a state of its own, it would be the nation’s seventh-biggest by population; its $91-billion budget would be the country’s fourth-largest, trailing only those of California, New York and Texas.

“When the final numbers started coming out, where a third of the population was on Medi-Cal, it went way past anyone’s expectations,” said state Sen. Ed Hernandez (D-West Covina), who chairs the Senate Health Committee.

…”The Medi-Cal program continues to grow at a very substantial rate, which is great. We are very happy that we’re able to provide healthcare to getting close to 13 million Californians,” said Mari Cantwell, chief deputy director at the state Department of Health Care Services, at a hearing in downtown L.A. this month. But, Cantwell added: “Obviously with that comes cost.”

And that cost is ponderous, indeed: 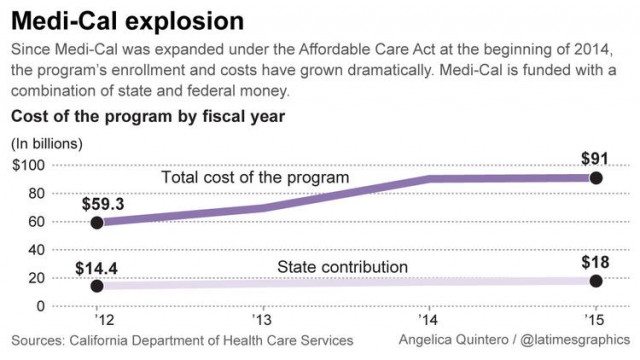 Right now, the federal government is paying the cost of the new enrollees…so many thanks to my fellow Americans for chipping into our state coffers. Starting in 2017, California will have to begin paying 5% and by 2020, the state will be paying 10% of the costs.

All we would need to do is grow tobacco for cigars, and between the sunshine and “free” healthcare, it would be Cuba on the West Coast.

The news gets even better! As more people sign-on to the “free” program, fewer doctors are taking new patients and there are more delays in getting appointments, treatment, and actual healthcare.

Another easy 2016 prediction to make is that under Obama, any problem that can be blamed on race will be. In this case, a group of Californians filed a civil rights complaint against Medi-Cal, alleging that failures in the program have made it so that Latinos are unable to access the healthcare they need.

Because Medi-Cal covers a population that is so heavily Latino, the complaint alleges, it fosters a “separate and unequal system of health care” that amounts to a violation of the Civil Rights Act of 1964.

The complaint cites a recent study that found that cancer patients with Medi-Cal were generally less likely to have their cancers caught at early stages, receive recommended treatments and be alive five years after diagnosis, compared to those with other types of insurance.

The complaint also alleges violations of a federal law that requires Medicaid programs offer enough doctors for patients, as well as a section of the Affordable Care Act that prohibits discrimination in health programs that receive federal funding.

The complaint demands an increase in Medi-Cal-provided reimbursement rates and improved monitoring of the Medi-Cal program.

And the last easy 2016 prediction to make is that California governance will continue to be bereft of common sense and fiscal responsibility.

And how is this supposed to happen? Is the state going to put doctors in SLAVERY and demand they work?

You may be on to something here. We can just “rebrand it” since slavery has a bad connotation. Sort of like the change from “Global Warming” to “Climate Change”. Oh maybe let’s go with “Voluntary Public Service”

The immediate fix is to shift more care to nurse practitioners, and physicians assistants for primary care and shift lower tier health care to lower echelon health care members. The easy progressive fix is to just give NPs and PA’s the title “Doctor”. From a Rand study, if you enslaved all doctors the reduction in costs would be 10%. There is already major cost shifting to doctors…. cost of medicine too high…. reduce reimbursement. My personal doctor got a letter of accusation by Medicare of fraud…. multi-page letter that she defrauded the government of 2 cents…. I saw the letter.

They’ll import more doctors and nurses from India under H1 and J1.

The State controls the license. Look for them to mandate a certain level of service from anyone who wants a medical license.

Just remember – 1/3 of all the people in the USA on public assistance lives in California.

You can’t actually do that one. There has to be some ‘buy-in’ by the local group being controlled, and eventually when that becomes onerous, the group rebels and simply says “NO.” You can’t ‘force’ a professional to take on clients, even as a requirement of license without giving them an ‘out.’ That’s called indentured servitude.

I know this for a fact. The local bar association in El Paso, pursuant to an “agreed order” from a 1970s SCOTUS case required that any private attorney practicing in El Paso was REQUIRED to either take on 2 pro bono cases a year (being compensated at the “pro bono” rate OR pay $600 to defer the cost. We called it the “indentured servitude tax” or the “privilege of practice in El Paso Tax.”

When I became the Chair of the Local Rules and Judicial Liaison committee, my FIRST act was to talk to the Council of Judges about raising the “pro bono” compensation rate from $65 per hour to $75 (where it was 10 years ago, before $10 an hour was “given back” due to the 2007 downturn in the economy.

But, the local Commissioner’s Court (the elected county group) threw a fit because it raised the “indigent” appointment of counsel cost from $5 Million to $6 million for the year, and demanded that the attorney’s drop back down to $65. The attorney’s said “HELL NO,” and even at $75 we’re STILL under-compensated, and started REFUSING to take the cases AND refusing to pay the $600.

In order to get ANY attorneys back on board, they had to RAISE the payout again to $90 per hour AND make they system truly voluntary to participate and even then, only about 150 of the 2,000 attorneys have rejoined the appointment list.

The moral is that you can only push service providers so far before they rebel.

California should just simply randomly appoint undocumented prisoners as doctors and nannies as they are released from prison in the dead of night prior to notification and turn over to immigration. Can’t wait for prison tat brain surgeon operates on Gov. MoonBeam.

This is what happens when the idiots on the left declare healthcare a right. When something requires the services of another then it can never be right. They see nothing wrong with enslaving the medical profession to do their bidding and work for peanuts. To hell with all of their college and medical training. The latinos have figured out the American system and by God they are going to use it until it fails.

So the whole country is subsidizing the health care of CA residents now to the tune of $73 Billion a year.

1/4 – 1/3 of the residents of CA are foreigners that came illegally.

…and note that $73 Billion a year is $229 from every man, woman, and child in the country (more than double that if you count just taxpayers).

How may people can’t afford their own healthcare or whatnot because they’re forced to subsidize California’s?

Poor voting decisions have consequences. And now you get to live with them.