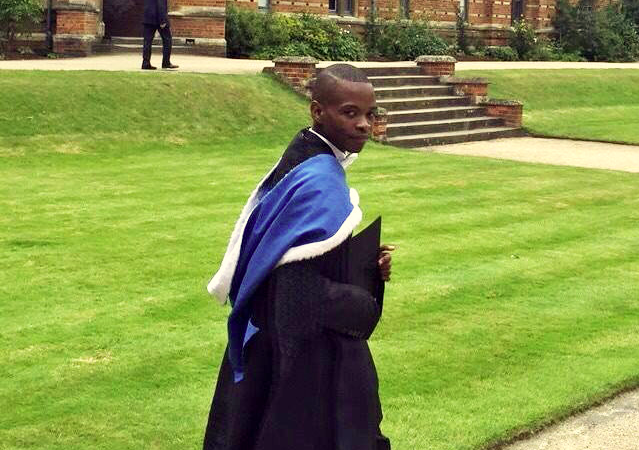 The Oxford University student behind the demand to remove Cecil Rhodes’ name from the Rhodes Scholarship now has another demand — ban the French flag on campuses.

The Telegraph reports on the new demand to ban the French flag:

The law graduate behind a controversial campaign to remove a statue of British colonialist Cecil Rhodes from Oxford University’s Oriel College has turned his attention to the French flag, saying he’d support its ban on all university campuses.

Ntokozo Qwabe, co-founder of Rhodes Must Fall in Oxford, says France has committed acts of terror and refused to concede that Isis is worse than the French state.

Following last month’s Paris attacks, in which 130 people were murdered by Isis, 24-year-old Qwabe wrote on his Facebook page: “I refuse to be cornered by white supremacist hashtagism into believing that showing my disgust for the loss of lives in France mandates identifying with a state that has for years terrorised – and continues to terrorise – innocent lives in the name of imperialism, colonialism, and other violent barbarities.

“I do NOT stand with France. Not while it continues to terrorise and bomb Afrika [sic] & the Middle East for its imperial interests.”

Qwabe claims the statue of Rhodes depicts a “racist, genocidal maniac” who was “as bad as Hitler” and has gained more than 2,000 student supporters in his campaign to have it removed, but others have called him a hypocrite as he is studying at Oxford after winning a Rhodes scholarship to the university.

Asked if he was implying that the French state is a terrorist organisation akin to Isis, Qwabe told The Sunday Times: “Well, [France] has committed acts of terror in numerous parts of the world.”

. . . . Branding the French flag a “violent symbol”, Qwabe said he would support a campaign to remove it from universities. “I would agree with that in the same way that the presence of a Nazi flag would have to be fought against,” he said.

He should be sent home. Scholarship revoked.

No banning national flags because he has an obscure, extreme leftist opinion. Same with Cecil Rhodes’ statue.

Let him work to pay for his education, if he is such an ingrate, such a leftist Marxist loon.

Without Rhodes (warts and all) and those like him, Ntokozo Qwabe would very likely never have existed at all, and certainly not in his present pampered, privileged iteration.

Assuming NO “cross-pollination” with Western culture, including science and morals, the people of Africa, just like the people of the pre-Columbian Americas, would still be in the stone ages.

PLUS, now, today, it’s people like Ntokozo Qwabe who are most hampering the progress of all people, world-wide.

Showing again that, regardless of the intelligence one is born with, you can’t fix stupid (if stupid is embraced).

Without Western imperialism and colonialism he thinks that he, like many others, would be prince or princesses of the _____ Empire. Fill in the blank with Zulu, Aztec, Inca, Mayan, Bantu, Indian ,etc, etc… Rhodes squashed many of the tribal wars in Southern Africa. His heroes probably are Mugabe, Nkomo and many others who acted as the Big Chiefs in post-colonial Africa. Having killed off the present, they turn to annihilate the past.

This is an important people. The social justice wankers always think that if the world was fundamentally transformed into what they considered ‘ideal’ that they would be one of the leaders of said new world. They never consider the possibility that they would be a) dead b) a peasant c) a slave.

Mr. Qwabe has escaped being dead, a slave and a peasant. But of course, he’s not grateful.

Why not. He lives among Globalists that deludes themselves: that they would be one of the leaders of said new world. They never consider the possibility that they, and most especially their children, would be a) dead b) a peasants c) slaves.”

How about a simple “no”?

That is more generous than my initial reaction, which was “screw him”.

Mugabe has invited survivors of Zimbabwe’s lynching revolution to return in order to prevent millions of people from starving in Africa’s breadbasket.

For example, was it Mandela’s faction, competing Zulu factions, or the native whites in South Africa?

Ban a flag to prove something.

To think of this guy in charge of anything is disquieting.

His moral compass appears dysfunctional and it affects how he manifests his behavior as perceived intelligence.

Mr. Qwabe: sit down, shut up, study your materials, earn your grades because unlike US universities, you don’t get courtesy high marks for having dark skin.

If you find your surroundings incompatible with your comfort or worldviews, both Heathrow and Gatwick have flights virtually every hour that head south. Take one of those flights, and leave your empty seat and scholarship for someone who wants it.

Be grateful that he isn’t throwing faeces around like they were at UCT in March this year! I am a UCT graduate (LLB Class of 1996) and I was on campus during some of the most turbulent times in South Africa’s history, especially in the run up to the 1994 election, when violence in South Africa was at an all-time high. Tens of thousands of students walked past Rhodes’ statue on UCT’s Upper Campus every day without batting an eyelid – go figure! The main force behind the #RhodesMustFall campaign is THIRTY YEAR OLD Chumani Maxwele (https://en.wikipedia.org/wiki/Chumani_Maxwele) who seems to be a full-time political agitator with a peripheral interest in studying (30 years old and STILL on campus? Really?) I’d love to know who is financing this idiot…

“I’d love to know who is financing this idiot…”

That’s an easy one. Same people who financed another idiot calling himself “Barach Hussein Obama.”

Did they learn to throw feces from jungle apes, or was it the other way around? Monkey see, monkey do.

Rather than discovering reality and adapting and allowing others to do likewise, this totalitarian dictator in the making tries to make reality and others serve him and his narcissism. He uses what he hates and wants to destroy…or is the word “transform.” Intelligence without a moral compass, wisdom, tolerance, or judgment is on display here (and in the WH).

Tell him to pack sand, get a job, and learn about life. He is a leach complaining about his host.

Why do we even give idiots like this a platform to speak?