Big takeaway: Treat students like babies and they will act like babies, as to the Constitution and everything else. 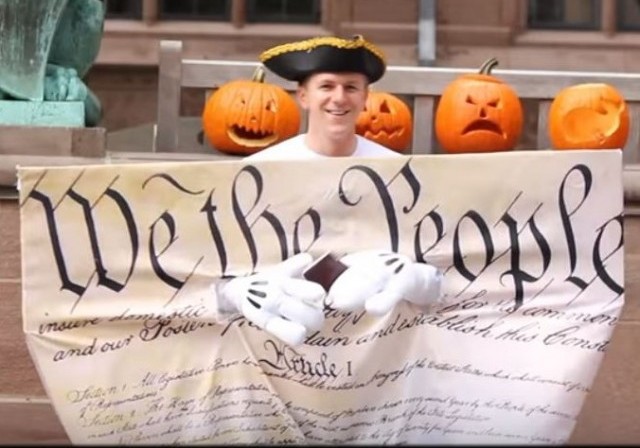 Cornell University isn’t paranoid, James O’Keefe really is out to get it.

When Cornell Media Relations overreacted to Jesse Watters asking students questions on campus, I wrote that it made no sense on the surface, but might reflect paranoia about James O’Keefe, who previously did a sting video at Cornell:

What explains this overreaction?

I suspect it was the Project Veritas video in which a Cornell assistant dean of students appeared to indicate a willingness to have ISIS train on campus. (As I made clear in my post about it, I don’t think the assistant dean understood the questions.) That created a firestorm of controversy to which university communications was very sensitive.

But for Jesse Watters, these campus visits are out in the open and all in good fun. Cornell Media Relations should have left well enough alone. After all, it’s Watters, and everywhere is his world. 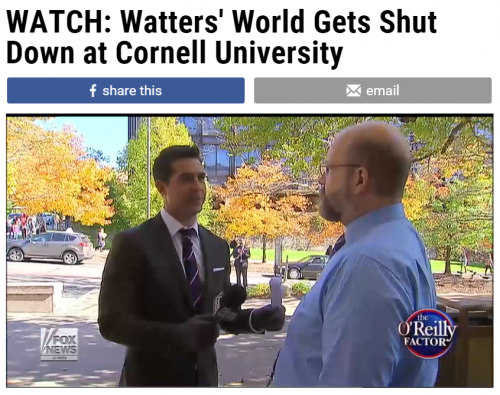 I should have known something was up when Project Veritas tweeted my comment about Cornell worrying about O’Keefe:

And, sure enough, O’Keefe’s Project Veritas group came out with a new Cornell sting video, as the Cornell Review reports, O’Keefe Video: Cornell Administrator Shreds Constitution Because it is ‘Triggering’:

Video from investigative journalism outfit Project Veritas (PV) released Thursday morning shows a Cornell administrator shredding a copy of the U.S. Constitution after a PV journalist posing as a student told the administrator the document is “triggering.”

Elizabeth McGrath, Cornell’s Lead Title IX Investigator, is seen in the video feeding pages from a pocket-size Constitution through a paper shredder after the undercover journalist says it would be “therapy” for her. McGrath asks the journalist if she would like to participate, an offer she declines.

“… I have my own personal reasons why the Constitution is very triggering for me,” the PV journalist tells McGrath.

In response, McGrath calls the Constitution a “flawed document” and calls those wrote wrote the Constitution “flawed individuals.” The video cuts to her saying the Supreme Court Justices who “voted against same sex marriage were, you know, really out of their minds…”

Later, however, McGrath appears to back away from the student’s negative take on the Constitution, saying, “… handing out [the Constitutions] on campus, I think, is a way for everybody to sort of see how to choose to interpret [them].”

When McGrath suggests the document be left with her, the PV journalists asks if they could shred the document as therapy for her, to which McGrath responds, “Absolutely.”

Right before the shredding, McGrath says, “Free speech means freedom to destroy whatever you want to as well.”

A Statement about the video was issued by Cornell V.P. of for University Relations, Joe Molina:

“The Project Veritas video released today would have you believe an employee was helping a student make a political statement by denigrating the U.S. Constitution. In fact, the video shows a “reporter” misrepresent herself as a student with a mental health crisis. Under the guise of addressing her mental health issues, the “student” asked the employee to help her shred the document she brought with her that was the apparent source of her anguish. Whatever personal views she may have shared in order to connect with a “student” who appeared to be in crisis, as an employee of Cornell University she was appropriately focused on addressing the apparently urgent need of the person before her and not on any larger political context.”

To which O’Keefe responded:

We at @Project_Veritas think Joel Malina and @Cornell are the crazy ones with this type of response… https://t.co/yN0SUoSrMt

The big takeaway here is not that administrators are willing to shred the Constitution. It’s the appeasement of seemingly hyper-sensitive students who complain about “triggering.” That took place on every campus, not just Cornell.

Treat students like babies and they will continue to act like babies, as to the Constitution and everything else. 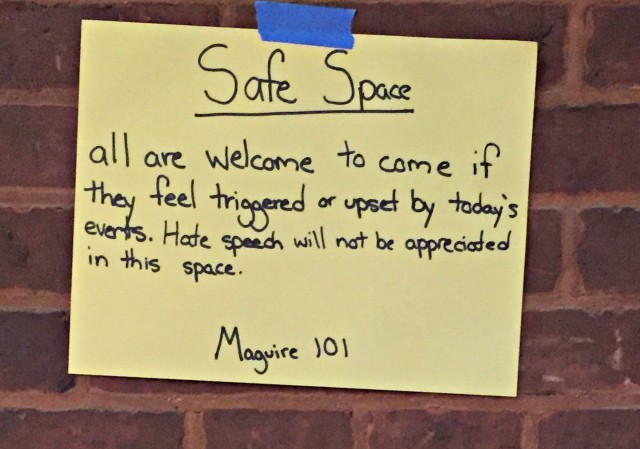 The “Peter Pan” syndrome, exemplified by the State-established pro-choice cult.

Professor, you seem to have extraordinary durability at Cornell for a conservative law professor amongst those who hate conservatives.

So, in other words, out universities are now daycare centers.

A truck-full of diapers and pacifiers for those whiners!

If you want to indoctrinate and control a university population, you have to disarm them, keep them immature and malleable, make them dependent, impose your own type of law enforcement, break down any residual connections to cultural and familial standards, and isolate them from contrary ideas, thoughts, and politics.

This is also how you form a cult.

Had pretty much the same impact on the King of England.

Meh. If you’re going to engage in entrapment, which is what O’Keefe does, stick to something serious enough to justify it – like shredding unborn children.

Or shred some of Cornell’s “scholarship”, like this:
http://www.amazon.com/Godless-Constitution-Moral-Defense-Secular/dp/0393328376/

It’ll be great watching this bunch when they get out in the real world.