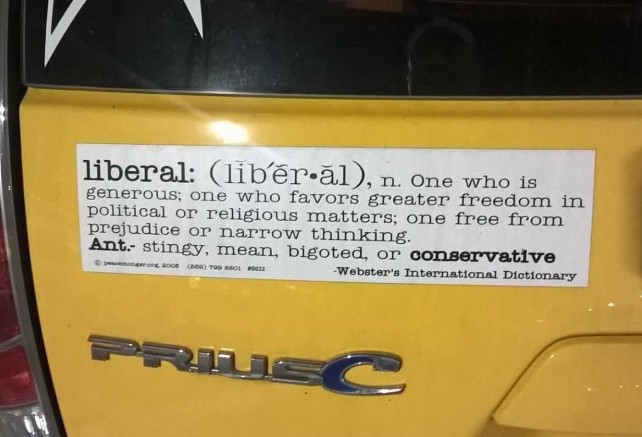 From J., seen in Charlottesville, VA:

I can sense Andrew Breitbart grimacing in Heaven. 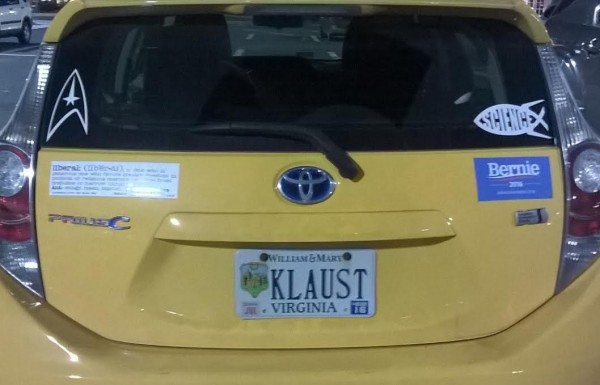 I was trying to figure out if “KLAUST” was the owner’s name and this was a vanity plate, or if there was some deeper meaning.

Turns out, “Klaust” is a form of a German word for stealing.

Perfect license plate, for a ˈli-b(ə-)rəl

That definition no longer defines what the modern ‘liberal’ is.

Liberal:
One who is generous – with other people’s money.
One who favors greater freedom for himself – but not for others who disagree.
One who thrives on prejudice and narrow thinking.

It’s exactly the sticker one expects to see on a Toyota Pious. The Bernie sticker adds to the cliché. Virginia plate: Probably lives in a DC suburb and is employed in some post-60s regulatory agency.

In the anti-spirit of the season.
Santa Klaust : Liberal. One who takes from others for redistribution to the favored. Delusional. Grinch. Of narrow mind & self serving beliefs.
Thief ; who utilizes government coercion to achieve their purpose’s.
Notable for having a reindeer with a big red commie nose to show the way. Not related to Rudolph.

The correct term for liberals now is progressive fascists. They seek to establish a utopia in the ruins of our country. In this Utopia they rule a one party state and thru it control every aspect of society. This utopia is identical in every significant respect that that created by their fellow fascists, the Communists, Muslims and Nazis. It would be just as evil.

The words the mouth to justify their evil is irrevant. They are designed to guil the foolish and simple minded. They can’t see thru the claims of good that are used to obscure the underlying evil of the progressive fascist movement.

Just take a look at the corruption and dishonesty in their leaders, Tyrant Obama the Liar and Hillary the Corupt Lying Butcher of Benghazi. There is no doubt that they lie over and over but their followers ignore their dishonesty. They believe that the ends justify the means so they don’t demand honesty.

The definiton given of liberal is exactly correct. In politics, the liberal side is the one favoring free trade, freedom of contract, freedom of expression and religion, the freedom to protect oneself, in other words the values this blog stands for. Socialists are, as Prof Jacobson indicates, thieves, and one of the things they stole was the name “liberal”.

Socialists have moved from name to name, mainly because their bad policies and lack of ethics have ruined the reputation of the words.

They started out a communists, then socialists, then liberals then progressives. Perhaps they have something new, now. In each case, they espouse the ugly politics of Big Brother, clothed in Orwellian language.

For example, there is nothing at all “liberal” about Obamacare. Obamacare is a huge tax, that forces people to pay for products that other people have decided are “good” for them. The Republican counterproposals are far more liberal, because they 1) allow more individual determination, and 2) work in favor of the individual by making insurance cheaper and more readily available to individuals who want it.

Obamacare is a huge tax, that forces people to pay for products that other people have decided are “good” for them.

That does not describe Obamacare.

Obamacare is a huge, complicated, system that pretends to force people to pay for products that other people have decided are “good” for them, and gives other people the same thing for free or at a greatly reduced cost, with clawbacks if reported income one and half years later is higher than estimared – except that the clawbacks probably mostly won’t happen.

Never forget that the liberal movement in politics arose out of the Anti Corn Law League. Nobody who supports protectionism can call himself a liberal.

It depends on how liberalism is qualified. In the wild, liberalism is unprincipled or pro-choice (i.e. selective). In its generational (i.e. progressive or monotonic change) form, it is a degenerative ideology.

This fits perfectly with today’s strip from The Knight Life, by Keith Knight in today’s San Diego Union-Tribune:

I hope this works. I couldn’t get the strip at his own website, so the address is to Go Comics. That site at least has date searching that corresponds to newspaper publication.

How often have we seen this? This is a self-described “open-minded” person who refuses to give a black entrepreneur a chance, based on the alleged racism of people who have never had a chance to weigh in on the question.