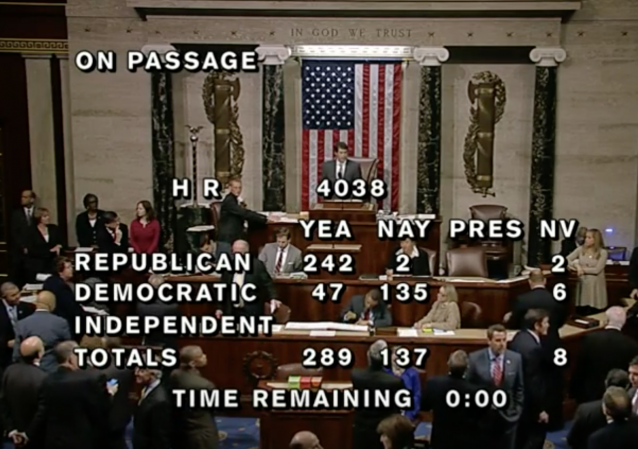 In the wake of the Paris terrorist attacks, Americans are looking toward their elected leadership for a way forward in the plan to defeat ISIS.

One of the plans put forward by the GOP-led Congress is to enhance security measures and to temporarily halt settlements for the incoming Syrian and Iraqi refugees, and to also require the FBI and Department of Homeland Security to perform individual background checks.

The White House has reported that President Obama has made it clear that he will veto the House-led legislation if it arrives at his desk.

“Given the lives at stake and the critical importance to our partners in the Middle East and Europe of American leadership in addressing the Syrian refugee crisis … [Obama] would veto the bill.”

But even some Democrats are showing defiance towards the president’s strategy and are aligning themselves with the GOP on this particular issue.

The Blue Dog Democrats, who are more conservative-leaning, will back the legislation.

Rep. Brad Ashford, D-Nebraska, spoke in defense of the refugee program, but also cautioned about the status of the U.S. national security:

“I am proud of America’s legacy as a welcoming nation to people fleeing violence in their home countries,” he added, “but during the process of admitting refugees from countries associated with ISIS, we have to ensure that those coming to the U.S. do not pose a threat to the American people.”

The Blue Dog Democrats are a coalition of roughly up to 15 members of moderates who do not necessarily align themselves with the Democratic leadership, but advocate for conservative principles such as a strong national defense and fiscal responsibility.

While the Blue Dogs are siding with Republicans, the expected opposition from other Democrat congressional members exists.

“Let’s remember: These people are the victims of ISIS. They’re fleeing from ISIS. They are not ISIS. So will we now slam the door in their faces?”

The bill, entitled the American Security Against Foreign Enemies Act, found safe passage through the House of Representatives by a 289-137 vote count, with 47 Democrats voting with Republicans. It now moves to the Senate, where tougher opposition expected.

While partisanship is a landmark of politics, the American people are looking for more results than rhetoric as terrorism continues to branch out in the international scene.

That’s a 2/3 vote in the house. Wonder what it’ll be in the senate. And if congress does override an Obama veto- what will the Democrats do when he ignores them? Which he will.

“Smart” Democrats in the Senate will stand with the Republicans, IF they want to re-elected.

Unfortunately, only ten Democratic Senate seats are up next year. And only Nevada and Colorado look competitive as of now, although Democrats may hurt their chances against the more vulnerable Republicans in PA, IL, & NH.

I’m sick of the bullshit Obama and the hard left are trying to sell with the refugees.

Like always, Obama is heroically slaying strawmen and acting like it is a binary decision of accepting all of them or none of them.

Two words should shut up any of the bullshit strawmen slayers: Mariel Boatlift.

That was an absolute catastrophe and unlike ISIS, Castro wasn’t even trying to injure the US, he just wanted to get rid of his undesirables.

Who are the two GOP representatives who voted no?

My Rep who is a Dem and always votes along party lines actually voted for this. If that’s any indication, it’ll pass the Senate too!

The two congressmen who voted against the bill,
Walter Jones who is really a Libertarian not a Republican.
Steve King who endorsed Ted Cruz

Is this the same bill described as a sham at PowerLine?
http://www.powerlineblog.com/archives/2015/11/the-house-refugee-bill-is-a-fraud.php

haven’t read powerline and not going to bother, but yes, the bill is a sham. Another R sham to try and fool the voters into thinking the r party actually does something.

Help the refugees by joining the Russia coalition to combat the social justice-fostered global humanitarian disaster.

Help Americans, and humanity, by ending selective-child policy that enables the abortion and planning industry to indiscriminately kill and cannibalize over one million Americans annually.

Confront the causes directly. Stop treating the symptoms for profit.

Folks, don’t get all giddy over this Dem vote in the House. Pelosi didn’t intervene because Reid told her that it was DOA in the Senate and to let her members vote if they were from conservative districts. This has nothing to do with giving a damn about our country or national security. This all inside politics and nothing more.

Inspectorudy.
You are dead on. It’s all the usual Republican bullflop. There are no blue dog democrats, the “Freedom caucus” is largely a sham. What was the vote? 9 republican’s voted against Ryan for speaker if I remember right?

“if it saves one life, its worth it.” isnt that what the democrats are always saying?

This is all a sham. The House vote helps Dem’s who all face re-election, but in the Senate the Dem’s will block it with the 60% rule that Granny McConnell loves. McConnell can talk like he wants to do something but the 60% rule prevents it so that he doesn’t actually have to deliver anything. Roll-Over Party doing what it does best – nothing.

It’s all such BS. FBI claims it is ‘impossible’ to vet all the ‘thousands’ of ‘refugees’ but the State Department can vet every American citizen (that would be ‘millions’, BTW) for passport renewal or revocation with the helpful input of the IRS – if you owe too much, your passport can be denied or jerked.

We live in a country where full ‘rights’ are extended only to illegal aliens while actual citizens suffer such bullshit.

I’d get upset, but I don’t need a stroke this week.

May come in handy later, though.

This bill is BS, meant for republican CYA.