Obama in ’08: “Under my plan … electricity rates would necessarily skyrocket” 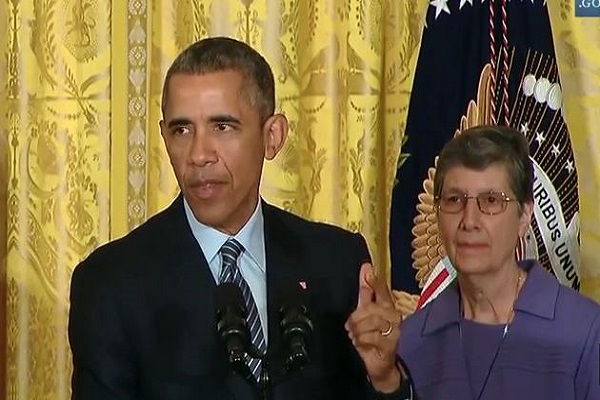 Back in 2008, Obama suggested that it would be necessary to bankrupt the coal industry in his efforts to establish “green” energy alternatives—he wanted to “take coal off the table as an ideological matter.”

The Daily Caller has a partial transcript of the above interview:

In 2008, Obama said his energy policies would “bankrupt” anyone who wants to build a coal plant.

“So if somebody wants to build a coal-powered plant, they can; it’s just that it will bankrupt them, because they’re going to be charged a huge sum for all that greenhouse gas that’s being emitted,” Obama said during a 2008 interview with the San Francisco Chronicle’s editorial board.

“Under my plan of a cap-and-trade system, electricity rates would necessarily skyrocket. Even regardless of what I say about whether coal is good or bad,” Obama said in 2008. “Because I’m capping greenhouse gases, coal power plants, you know, natural gas, you name it — whatever the plants were, whatever the industry was, they would have to, uh, retrofit their operations. That will cost money. They will pass that money on to consumers.”

Apparently intent on keeping at least one campaign promise, Obama announced in August sweeping plans to “reduce greenhouse gas emissions from the nation’s power plants” via a cap and trade-type plan along with increased standards and regulations aimed at the coal industry.

According to The Hill, twenty-four states and Murray Energy filed suit yesterday to challenge these onerous rules.

The litigants accuse the Environmental Protection Agency (EPA) of going far beyond the authority Congress granted to it by ordering a significant transformation of states’ electricity generation, moving away from fossil fuels like coal and toward lower-carbon sources like wind and solar power.

They are asking the Court of Appeals for the District of Columbia Circuit to overturn the rule. They also want the court to immediately stop its implementation while it works its way through the courts.

West Virginia Attorney General Patrick Morrisey (R), who is leading the legal fight against the plan, called it “the single most onerous and illegal regulations that we’ve seen coming out of D.C. in a long time.”

On a call with reporters, Morrisey repeated many of the long-held arguments against the rule: that it will hurt his state’s coal mining industry, raise power rates for consumers and risk electricity reliability.

“EPA’s rule is flatly illegal and one of the most aggressive executive branch power grabs we’ve seen in a long time,” he said. “The EPA cannot do what it intends to do legally.”

And the action against Obama’s “Clean Power Plan” won’t stop there.  Apparently, yesterday also marked the first day that Congress can move to overturn regulations under the Congressional Review Act.

In a separate article, The Hill reports:

Lawmakers are mobilizing quickly against the new climate change rule from President Obama, announcing they will file formal congressional challenges on Monday.

“I have vowed to do all I can to fight back against this administration on behalf of the thousands of Kentucky coal miners and their families, and this CRA is another tool in that battle,” McConnell said in a statement.

Watch the report from Newsy:

The only thing wrong with the lawsuit is that it’s not all 50 states suing.

Obama’s unconstitutional executive power grabs must be stopped, and every one of the states needs to step up to the plate. You state AG’s have a duty to uphold and defend the constitution, both as lawyers and as citizens. So why are 26 of you not doing your duty?

Congress provides the laws and the money for the EPA. Where is Congress? Anybody seen them?

Where is Congress? In the House, they’re arguing over whether the Speaker is the commander that everyone must follow or whether voters have some kind of say.

In the Senate, they’re napping in between donor calls.

Where’s Congress?! Did you read the article? Two separate resolutions will be introduced in the senate to disallow the policy. What else do you expect? Yes, congress provides the money, but any appropriation bill that doesn’t include money for the EPA will be filibustered, and if it passes it’ll be vetoed. You need 60 senators to overcome a filibuster, and 67 (as well as 290 representatives) to overcome a veto, and the Republicans simply don’t have those. So it’s impossible to cut the EPA’s funding without the whole government shutting down, which will always be blamed on the Republicans no matter what.

I support a “sanctuary states” move.

“Sanctuary states” means the states won’t enforce the EPA’s rules, but they already don’t. So what else can they do? They can’t stop the EPA from enforcing its own regs, any more than cities can stop ICE from deporting illegal residents.

They can refuse to cooperate with the EPA, Milhouse. On any level.

How? If Obama doesn’t like them, he’ll just ignore them.

If the rules are struck down or disallowed by Congress 0bama can’t enforce them, however much he wants to.

All businesses and citizens need to stand up to any more government regulations. Just say NO. Do not comply.

Looks like McConnell in the first picture standing next to him.
Hey, I know lets have solar power, it’s clean and it’s cheap….

According to the Press Enterprise in Riverside, Calif. , Ivanpah emits enough CO2 that it will “be required to participate in the state’s cap-and-trade program to reduce carbon emissions.”

In its first year, Ivanpah emitted 46,000 metric tons of CO2. That’s about as much as a Frito Lay plant in Bakersfield emits.

Kirk Sorenson of FLiBe Energy talking about the inadequacies of wind and solar power:
https://youtu.be/qLk46BZfEMs?t=9m40s

The video in toto is about the need to develop anew an old form of nuclear reactor for power generation – the molten salt lithium flouride thorium reactor. Those of you with geeky streak need to watch the entire video.

One of the presidential candidates will soon need to stand up and issue a list of actions he / she will overturn once elected. Give the poeple some hope. That candidate will also need to give a list of GOPers that will be summarily ignored – like Ryan, McConnell, Boehner, and similar turds. Need to make sure people understand it will all change after the election, so no idiot goes out there and gives the WH an excuse to impose martial law or any other ridiculous nonsense.