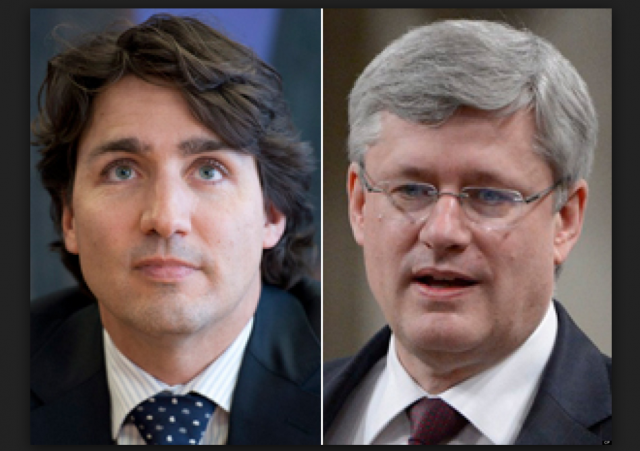 [Some updating by WAJ]

Keep in mind that Canada has a parliamentary system, so the next Prime Minister is like to come from a party with less than a majority.

Veterans of Team Obama has been backing Trudeau, trying to unseat Harper just like they tried to unseat Bibi Netanyahu in Israel. The Liberal Party was leading in pre-election polling.

The current seat breakdown based on the latest polls. Our live results page: https://t.co/XXUu52c6Qm #elxn42 pic.twitter.com/q30VmEQhzJ

Thanks for the useful links. Scary election

We’ve gone from being able to walk across the border to needing a fucking passport to go to Canada. Why in the hell are we worried about Canada?

Now we’re meddling in their politics. Is there anywhere we are not meddling in the politics? Seriously there is something wrong with this country. And Canada is electing a Trudeau. I remember how that went last time.

Start planning your trips to Canada. Already the CAD has weakened to the USD lately. It takes about 1.3 CAD to equal 1 USD right now. IN about a year after Trudeau starts to make their economy more “progressive” I won’t be surprised if the exchange gets back to the 1.5 or 1.6 of the heyday. A luxury hotel for 60 or 70 USD!!

They just got things on the right, profitable, prosperous track. Amazing………..

I think that’s exactly why. Things were stable enough, comfortable enough, secure enough that the Canadians forgot how the Grits behaved last time. This is how a democracy works.

Granada must want more Muslims to live on the dole and help stifle free speech further.

She does. Lack of eagerness to host Syrian refugees was made into a campaign issue, though compared to most people just not liking Harper, and being loud about it, and not liking his wedge issue campaign style (which they found “American” and so forth, and not being convinced this new Trudeau is an incompetent pup (anymore), well, it was too much, apparently.

Canadians are stupid then. After reading about the rapes at “migrant” camps, the filth created by the “refugees”, the chants of Allahu Akbar, the disdain shown for the locals, the invaders’ sense of entitlement, they voted for someone who will import Muslims to islamicize their country?! What fools they be!

Ah, that was an extremely minor issue though. At a much more basic level, this is normality. People didn’t like Harper. Even a lot of the people who voted for him didn’t like him as a person. But I think his stiff spine will be missed. The fact Canada went so long without normality after getting sick of the last Liberal regime doesn’t change the fact it IS normal, and there’s a hard-wired majority for a left of center government if the left can just agree on one party long enough.

Canadians are just as dumb as Americans apparently.

They get us to do most of the heavy lifting on defense so I’m not so sure they’re as dense as they would like us to think.

Canadian voters proving yet again that you can’t fix stupid.

Turdeau is a Islamophile. Looks like we need to double the order for fencing material.
Oh, Canada!!

Wow. It never amazes me how after having conservatives in power and the policies bringing a country to prosperity, stability, etc that they decide they want to do the feel-good liberal bullsh!t.

I want to know how much of his margin of victory is due to the Muslim and other immigrant vote.

I’ll still eat my daily pound of bacon, BUT NO MORE CANADIAN BACON.

“BUT NO MORE CANADIAN BACON”