Carly Fiorina: “I think I am distinctly horrifying to liberals.”

Carly Fiorina: “I think I am distinctly horrifying to liberals.” 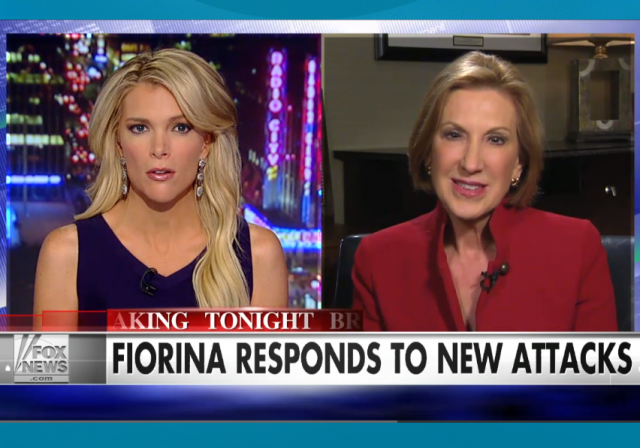 Carly Fiorina is now polling ahead of Hillary Clinton in Iowa so naturally, the liberal media has sharpened its claws for new attacks on her.

Famed California pollster Joe Shumate was found dead in his home one month before Election Day 2010, surrounded by sheets of polling data he labored over for the flailing Senate bid of Carly Fiorina.

Upon his death, Fiorina praised Shumate as “the heart and soul” of her team. She issued a news release praising him as a person who believed in “investing in those he worked with” and offering her “sincerest condolences” to his widow.

But records show there was something that Fiorina did not offer his widow: Shumate’s last paycheck, for at least $30,000. It was one of more than 30 invoices, totaling about $500,000, that the multimil­lionaire didn’t settle — even as Fiorina reimbursed herself nearly $1.3 million she lent the campaign.

MSNBC picked up that report and ran with it, digging up what they thought was new dirt in the process.

Fiorina appeared on the Kelly File last night and dispelled these attacks, pointing out that the Washington Post never went after Hillary Clinton for a much larger amount of campaign debt.

Here are a few recent tweets from Fiorina:

Carly is ready to beat Hillary! A new poll has Carly beating Hillary by 14 points in Iowa. #Carly2016 pic.twitter.com/anpX5Y1Vgb

How do we get our economy growing again?

Q: What is wrong with the Left's definition of feminism?

Carly should be scary to everyone. The only people she isn’t scaring are the people who are so desperate to have a female opponent against Hillary they are willing to scrape the bottom of the barrel.

All of the Carly hate on the Conservative sites is hysterical.

Its because conservatives want someone who isn’t a Bush/RNC amnesty loving establishment candidate, and they realize Carly is just Bush with a va jay jay. They mostly feel the same way about Rubio.

I always wonder about someone who PRETENDS any conservative view, but aligns himself with Bernie Sanders on market economics, AND who plants his lips on the ass of a guy who runs like a sissy to the FCC when someone uses their free speech rights in a way that hurts the sissy gurl’s feeeewings.

I’m sure you find wonder in many everyday common things.

I DO! I LOVE that the deer are passing by my office window, and the tiny little finch comes and sings so loudly on the window ledge by my desk where I place the seed to attack birds. I love the passing panoply of life!

AND I LOVE that that there are idiots who are so consistently idiots!

“You love idiots” No need to bring your wife into this.

It would be easy to answer in kind.

But I’m happily NOT your kind.

You are a pig.

I can’t stand her but if you have to resort to using her physical looks as an argument you’ve lost that argument.

Carly broke through the ” Glass Ceiling,” in the corporate world. She has a terrible record of making unsuccessful decisions. She is very cozy withe the Islamists. I get the impression that she would do or say anything for a vote. She is a much better choice than LIAR Hillary, but she might be another RINO.

Proof of Carly’s poor decision making skills: running as the establishment’s insider in the outsider group.

Yes, maybe. Hopefully, Fiorina will stop laughing long enough to thank Russia for providing Americans safe passage out of the Obama-created quagmire in the Middle East, and saving Europeans from the social activism that created a humanitarian disaster across three continents.

Not likely. Fiorina and Hillary both want to start world war 3 with their insane no fly zone ideas.

Like Obama and Duh Donald want to just sit and watch things go to shit.

Full court press for Amnesty Annie for over a month and the Establishment can’t get her out of single digits.

Funny how a ‘good’ poll gets ugly quick from another perspective.

But he DOES narrowly beat Hellary in unfavorables…with virtually nobody undecided as to either.

Well, what you’ve seen is a lie. Drill down, brother.

Start with that and then tease out more information.

The Fiorinas have been very pro-life for many years.

Nothing new from philanthropy.com. Open questions from the original, including a second charity:

… it’s interesting that she’s comfortable being associated with a foundation that provides the program with funding given her impassioned speech opposing the women’s health organization during the second GOP debate.

She can say she’s pro-life. Talk is cheap. These were unforced errors.

“I think I am distinctly horrifying to liberals.”

I don’t see anything much in Carlyism to worry liberals, let alone horrify them.

She’s making some aspects of Federal policy re abortions an issue, but there’s approximately zero chance of her changing it in any substantial way even if she ends up as President. So, from the liberal view, no worries at all.

Very true. These elections every four years are just Kabuki theatre to keep us all distracted from what we should be focusing our energy on: pressuring our state legislatures to call for an Article V Convention of States. DC will never change itself; it is too far gone, too corrupt on both sides of the aisle.