Even MSNBC is out to get Debbie Wasserman-Schultz

Even MSNBC is out to get Debbie Wasserman-Schultz

…not that there’s anything *wrong* with that! 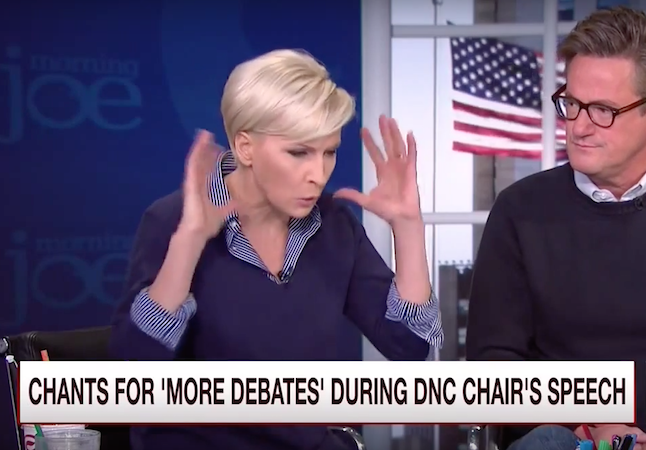 Debbie Wasserman-Schultz is not having a good time this cycle. Charges over the DNC’s “rigged” debate schedule have gained traction, and activists and prominent Democrats from presidential candidate Martin O’Malley to congressional leader Nancy Pelosi have taken to national media outlets to question DWS’s decision to limit the number of official debates her candidates are allowed to participate in.

On Saturday, that frustration boiled over. Spectators at the New Hampshire Democratic Party convention drowned out DWS’s speech with cries of “we want debates! We want debates!” further embarrassing the party and giving stronger legs to efforts meant to push the DNC toward a more substantial debate schedule.

MSNBC caught on to the controversy this week. Not only did they call DWS out for limiting the number of debates, they directly accused the party of playing flack for Hillary Clinton’s campaign.

Courtesy of the Washington Free Beacon:

“I think [Schultz] is wrong to stand in front of Democrats and lecture them about what they should be concerned about in the room,” Ford said.
…
“Debbie Wasserman Schultz seems to be in her own glass box about this and it’s one that wants to anoint one candidate and leave others out,” MSNBC co-host Mika Brzezinski said. “It’s fine, but she’s absolutely wrong about this. Everyone’s yelling at her.”

Brzezinski said that the Democrats would hurt themselves by limiting debate in primaries, which help to vet candidates and expose their flaws before the general election.

“Look at, quite frankly, the work that the Democratic side needs. We need these conversations. We need to see them happening between Democratic candidates so they can challenge each other,” Brzezinski said.

Opposition is coming at DWS from the candidates, the grassroots, and the party. That being said, activists staging a protest at the DNC headquarters is one thing; party delegates shouting down their general is quite another. Now, the jig is up; she’s lost the media, and she’s quickly losing the confidence of even staunch Democrats who are unfortunate enough to support a candidate other than Hillary Clinton.

Will it move her away from her plan to limit debates, though? We’ll keep you updated.

Even the Dems are treating her as she were Wasserman positive.

“Not only did they call DWS out for limiting the number of debates, they directly accused the party of playing flack for Hillary Clinton’s campaign.

Ouch? Did we totally miss the irony and hypocrisy in MSNBC calling someone – anyone – a flack for Hillary?

If there are not going to be more debates then there should at least be DWTS-Dancing With the Socialists.

Hillary could “wipe” the floor with Bernie Sanders.

…if she could keep her balance.

Mainstream democrats don’t want these debates. They are using the current republican tactic of pretending to be held back by something, so they don’t have to act on it.