The threat whose name we dare not mention. 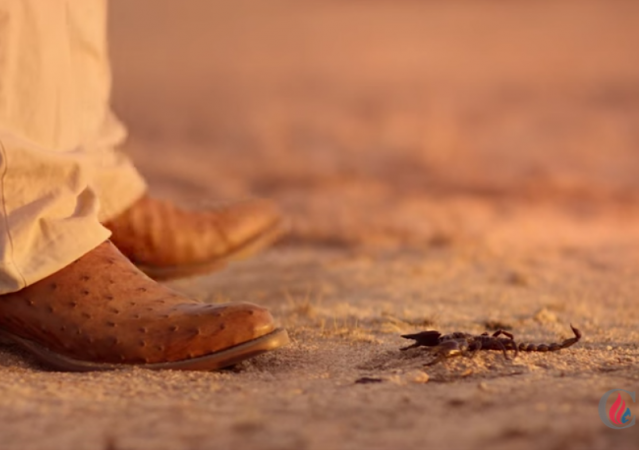 Ted Cruz just released an ad warning of a Scorpion in the Desert.

The identity of the Scorpion is not mentioned.

The ad is very similar to Ronald Reagan’s successful Bear in the Woods ad:

Reagan never mentioned the identity of the bear.

He didn’t have to.

Q. When will this insane Scorpionphobia end?

A. When the whole world submits.

If he gets the nomination, I will gladly vote for him.

And sadly, I suspect, he won’t.
LOOK at the numbers.

I intend to wait…there are MANY states voting before my state.
Should it be a dead heat, I’ll likely vote Cruz.
But I suspect that’s highly unlikely.
In the event Trump is running away with it, I intend to do everything in my power to stop the GOPe !Jeb! conspiracy, and will vote for Trump.

We’ll have to wait and see how things develop.

Unfortunately, I believe you are 100% correct. The vast majority of my conservative friends refuse to believe this. Deaf/dumb/blind comes in all flavors, as it turns out.

Lousy ad. Too obscure. Love Ted Cruz but he needs to be better than this.

Illegal alien invasion? You can keep your country if you want to.

But he is in favor of amnesty, or so they say. Talk about an undercover scorpion.

You are wrong. He is for LEGAL immigration, as is Trump.

Everyone should be in favor of LEGAL immigration. We should want the bright, healthy, hard-working people from around the world to come here so they can strive for a better life and help build a better USA.

What we should all NOT want is a tidal wave of uneducated, poor people with their hands out coming here to get onto our public welfare system.

Under no circumstances should someone who comes over here and gets on the public dole get the right to vote. That would be the very definition of national insanity.

Trump has said we should gave fast-track re-entry to all the deported people who already broke our immigration laws. That means putting them ahead of people who followed the legal process from the beginning.

WRONG.
NOT “all.”
He said, in other words, the “desirable” ones.

Someone or other was chanting “the devil’s in the details” WRT Cruz v. T-rump a while back.

It happens to be true WRT “touch back” amnesty. NOBODY has a clue what this means, and T-rump left it out of his crappy immigration paper entirely, or obscured it so well I can’t identify it (and I’m good at finding obscurity in documents).

Which OUGHT to make critical thinkers say “Hmmmm….”

Cruz makes #4 among all the candidates on Numbers USA Immigration Factbook. “Excellent” on Border Security.

They regularly update these ratings based on changes in conditions and expressed candidate viewpoints.

Weak tea, that ad. I like Cruz, but it is much too vague.

NO, it is NOT the same as the Reagan ad. Back then, the USSR was known as The Red Bear.

The NYT and other media outlets immediately understood the scorpion reference and they’ve never struck me as being particularly bright or honest so I’m guessing the average Joe will “get it”.

OOH!!! The BEACON of CONSERVATIVE journalism “gets it”…
the NEW YORK TIMES!!!

I still think MUCH MORE is needed to persuade voters to come over to Cruz.
(…and, like I said from the beginning: I like the guy!)

Had Hal Riney written and narrated the ad, it would be riveting. Unfortunately he passed away way too soon.

I love Trump fans. They always bring the intellectual rigor.

YOU may “get it.”
*I* get it…but: do you really think most people will, with the intensity intended?
I DO NOT.

But PLEASE: feel free to perform an act of physiological impossibility upon yourself at your earliest possible convenience.

Cruz is the best of the candidate group.

He’s clearly conservative, very intelligent, and not wasting his time in stupid attacks bashing Trump and his supporters.

Vague. I have no clue what the scorpion represents unless it is left to each individual to fill in the blank.

Could be the terrorist muslims, or the southern invaders, or both.

Everyone knew exactly what Reagan meant.

I like the ad, but I honestly don’t think the average Trump fan is going to be bright enough to get it.

Trump fan must be doubly confused, because they seem to think the only alternative to Trump is Jeb! (or McConnell and Boehner).

Our own dear Barry called me a “jeb idol” (whatever that means) because I’ve been critical of Trump — even though I have never expressed any great favor for Jeb.

So, you’re promoting Carson?!
(I know you’re not, you’re just being a jerk.)
Enjoy your echo chamber; only the mentally crippled break under being “challenged.”
(ooh! double entendre!)

It’s because you are and we all know it.

Radegunda, just for the record, pick your #1, 2 &3. No horseshit about how you are still listening and learning.

You clearly show everyone the difference between being a Cruz enthusiast and YOU: a Cruz FANATIC.

“…Stephens is the deputy editorial page editor of the greatest newspaper in the world. He should know better. He — and the rest if the Republican Party leadership learned nothing from 1992, when they mocked not only Reform Party nominee, billionaire H. Ross Perot, but his voters as well.

Here is a useful tidbit: If you want to win in politics, do not mock the voters.”

Whatever you want to do. You can either enjoy feeling superior and lose, or you can make an argument and win.

I wonder if the average Cruz fan is smart enough to learn the lesson of 1992? I’ve noticed Cruz is smart enough; he’s learned that lesson and you’ll notice he’s not insulting Trump or his supporters.

Which is one of the reason why I’m a Cruz fan. I’m becoming convinced I’m an above average one, though.

Cruz is the smartest guy running, IMO. Being the smartest is not the key to winning the election or governing effectively, in fact it is probably overrated. In the case of Cruz it works out nicely as he can and would be a good president in addition to being highly intelligent.

The scorpion add leaves too many outsiders scratching their heads however.

Yes, go Team R! I see I’m getting all thumbs down for suggesting we learn a lesson from the 1992 election, or else risk another Clinton.

Well, I certainly hope feeling superior to Trump voters is worth another Clinton, or an avowed socialist, or the third Obama term if Biden wins.

I don’t think its a good idea to gratuitously attack T-rump supporters, but I also don’t think anybody needs to let THEM push you around if you criticize the man.

Amy, you’re not bright enough to own a TV.

“…but I honestly don’t think the average Trump fan is going to be bright enough to get it.”

Did you mean don’t be as nasty as Amy perchance?

It’s supposed to add some humor, something in short supply around here.

“The identity of the Scorpion is not mentioned.”

It looks to be an Emperor scorpion. It’s not native to Texas, or even to the Americas. It’s from West Africa, as is common in the pet trade. You can tell the venom is relatively mild compared to extremely toxic scorpions that can actually kill people with their sting by the claw size. Scorpions that have relatively mild stings have large claws as they depend more on their claws to subdue their prey. Scorpions that depend on their venom have small, weak claws as the sting does all the work. For instance, the Arizona Bark scorpion no doubt is the most toxic scorpion in the US.

Note the small claws compared to the Emperor scorpion.

An Emperor scorpion is what you’d want for making a TV commercial. It is, after all, a pet.

“It’s from West Africa, as is common in the pet trade.”

People keep those damn things for pets? Who knew. Maybe this one is a Cruz household pet.

Now how did I get a thumbs down for IDing the scorpion?

I even gave you free survival tips. The really deadly ones have tiny claws. The ones whose stings are only moderate to severe have big, meaty claws.

Tarantula does too, but that’s for another day.