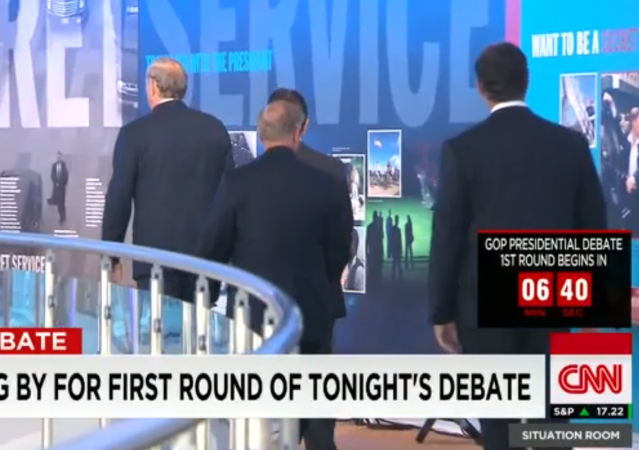 Howdy and thanks so much for joining us tonight! This is the first of two debate posts this evening.

First of all, cable or no cable, you can watch the debate if you have an internet connection. CNN is streaming both debates for free, but it will only work if you are in the United States:

If you don’t have cable, you’ll still be able to watch CNN’s Republican primary debate on Wednesday night, because the network is live streaming it for free on the web.

The livestream will be front and center on CNN.com between 6 p.m. and 11 p.m. ET. It’ll also be available through the news organization’s apps and the CNNgo web site.

In tonight’s early debate, we have:

But here’s the fun part. We want to hear from YOU. Questions, observations, thoughts, ideas? Share them in the comments section beneath. Amy and I will address them directly on the blog. Please keep them civil, appropriate, and debate-focused. We can’t promise we will get to every single one, but we will do our best.

Post-debate UPDATE by WAJ: Here are my tweets and retweets of the night and take on the “result”:

Jindal – The only group Obama can out-negotiate is Republicans #dk

If @BobbyJindal keeps this up, he'll be the @CarlyFiorina of this second undercard debate

.@BobbyJindal has some great lines — Obama has truce with Iran, war on transfat

Some of the night’s best moments:

.@BobbyJindal: "I don't think a 14-year-old should ever get arrested for bringing a clock to school" #CNNDebate http://t.co/myudTreS0w

Would rather hear from Bobby Jindal than Fiorina on main stage tonoc.

Go Bobby! He had the best opening statement.

I said at one point that he’s vying to being this JV debate’s Fiorina.

Trumpophobes claiming to be conservatives and Republicans are joined on the eve of the second debate by new anti-Trump allies Barrack Obama and Joe Biden.

Obama lashes out at Trump
http://www.nationaljournal.com/s/73097/donald-trump-is-getting-under-president-obamas-skin

Reminder: It’s nice to make new BFFs, but remember that the company you keep around you reflects the Character that’s within you.

Trump is a RINO, for sure. The only reason he’s running as a Republican is to support the pols he has paid off.

I’ve got a message for corporate America: if you want us to buy your products, you better start producing them here in the United States.
6:02 PM – 15 Sep 2015

For some illustration of just how stupid that is…

All losers. Why they even have this is beyond me.

I think Jindal is the only one I like and he lost it by trashing trump.

It’s certainly clear why Santorum is polling at about 1%. He’s a freaking moron.