“I feel sometimes I’m the only candidate who’s consistently been critical of her.” 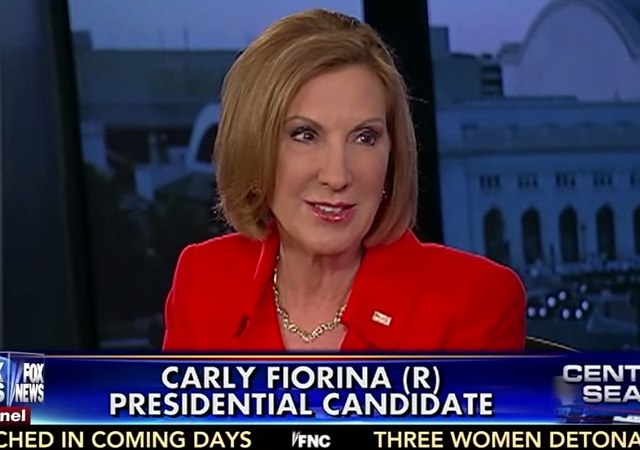 On “Fox and Friends” Monday morning, Fiorina spoke about numerous issues including Hillary Clinton, defunding Planned Parenthood, the refugee crisis, and her birthday.

“Going after Donald Trump hasn’t really gone well for other candidates who a lot of people aren’t really talking about that much about anymore. Is that a smart line of attack to go after The Donald?” asked a Fox News host.

Ed Henry also asked about Trump saying, “I want to give you a chance to defend Donald Trump and maybe give us an idea of your line of attack against Hillary Clinton in the days ahead… it sounded to me that she’s trying to revive this talk about a war on women.”

“Boo hoo Mrs. Clinton. Mrs. Clinton is the same person who compared Republicans to terrorists. For heaven sakes, I actually wish Mr. Trump would throw a little more heat Hillary Clinton’s way. I feel sometimes I’m the only candidate who’s consistently been critical of her.

The truth is, Mrs. Clinton has lied as Secretary of State about Benghazi, about her emails, about her server. So when she revives this war on women and make no mistake she will, this is her go-to line.

Of course we know now that Planned Parenthood doesn’t have a lot to do with women’s health. It does have to do with the character of this nation, and I hope very much that our leaders in Congress will once and for all pass the Pain Capable Childhood Protection Act and defund Planned Parenthood.”

Fiorina also weighed in on the refugee crisis saying:

“The world is a more dangerous and more tragic place when the United States is not leading and we have not been leading for a long time. Neither President Obama nor Secretary of State Clinton led, so three years ago in Syria, there were a lot of options available to us. But this administration stood back from all of those options and when you fail to lead, what happens over time, is your options diminish and situations worsen. That’s happened in Ukraine and Russia, it’s happened in Syria.

This refugee crisis and it is heart breaking beyond belief, but it was entirely predictable. In face, the UN estimates there are somewhere between 43 and 60 million people on the move, trying to escape conflict zones and so we knew this was coming.

It has absolutely been a lack of leadership on Obama and on Clinton’s part.”

I have my eyes wide open and I am watching Trump. I wish he would heed Carly’s advice and attack hillary and obama more. He goes after his fellow running mates like they are the devil incarnate but doesn’t have too many really mean and disgusting things to say about those two. Time will tell if he can narrow his focus to the three or four big issues and maintain his lead. Or will he get criticized one too many times followed by his well known explosions?

I’ll drink to that! And smoke another good cigar, too!

He’s been good pals with Hillary and Bill, whom he has called wonderful people. Seems he hasn’t been such good pals with any of the Republicans he’s running against

Obviously Trump was too subtle in proclaiming Hillary to be a criminal, having done things far more egregious than General Petraeus, and that she should be in prison.

Say, wasn’t there a guy named Donald something who raised issues about Obama’s birth certificate a few years back? Whatever happened to that guy, anyway?

I don’t see the point of attacking Obama personally anymore. He’s not up for re-election. As it is, Trump’s gonna be at that big rally against the putrid Iran deal. Hope he helps attract a big crowd for a worthy, if doomed cause.

” I feel sometimes I’m the only candidate who’s consistently been critical of her.”

Sometimes it takes a woman to do a man’s job?

Carly is either delusional, dishonest, or dopey about criticism of Hillary. She wasn’t on the main card in the first Fox debate, and maybe snoozed off afterward, but all those on stage knocked Hillary that night. Even Trump after the low blow questions.

And since then she must have her head somewhere else not to know how frequently Hillary is attacked by the wanna-be presidents. Just Google “(candidate name) attacks Hillary Clinton” and see how many stories pop up.

And the Donald: (“Trump tears into Clinton over immigration.” “Trump Repeatedly Criticizes Clinton Foundation” “Trump Calls Hillary’s Assistant’s A ‘Perv'”. Numerous other news reports of Trumps improvisational speeches at campaign stops are filled with criticism of Hillary (plus other prescient observations: at one event at a car dealership after ripping her, he praised Tom Brady, supporting Brady’s fight to oveturn the 4-game suspension with assurances he would prevail.