#BlackLivesMatter and #BlueLivesMatter — why the Dem and Media double standard?

#BlackLivesMatter and #BlueLivesMatter — why the Dem and Media double standard? 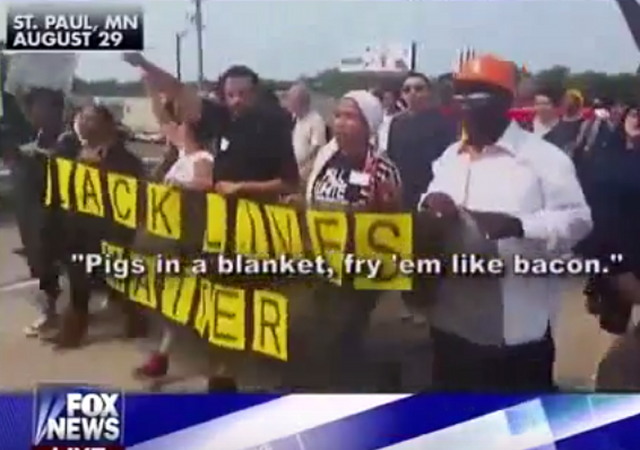 A few years ago, liberals in politics and media insisted that rhetoric coming from the Tea Party was violent and that we needed a new tone in political discourse. Now that #BlackLivesMatter activists are openly advocating violence, those folks are nowhere to be found.

Josh Feldman of Mediaite has more:

Megyn Kelly really went off tonight on the hypocrisy of Democrats and liberal media figures who were quick to condemn dangerous tea party rhetoric for the 2011 Tucson shooting but are now keeping silent about dangerous rhetoric from #BlackLivesMatter protesters.

After some protesters were filmed chanting “pigs in a blanket, fry ’em like bacon,” Kelly was amazed that not only have Democrats avoided the issue, but they’ve been recently trying to establish a connection between them and the movement.

Richard Fowler told Kelly and Katie Pavlich that they’re missing the point of the movement and that the chanting was from a select few, but a fired-up Kelly asked, “Why were so many on the left so quick to tie a few comments made by alleged tea party members to the entire tea party?!”

Katie Pavlich of Townhall makes some excellent points. The other guest is Richard Fowler who tried to push the false claim that Jared Loughner, who shot Gabby Giffords in 2011, was connected to the Tea Party.

Jim Hoft of The Gateway Pundit:

“The shooting you were talking about in the video clip. There’s actually evidence that indicates that this person had Tea Party sentiments. He agreed with the Tea Party.”

That is an absolute lie.

Meanwhile, over on MSNBC, #BlackLivesMatter activist Trahern Crews told Chris Hayes that those anti-cop comments about frying pigs like bacon were just playful:

See? It was just a joke. There’s no double standard.

“….why the Dem and Media double standard?….”

Because they have committed themselves to do evil…..

Double standard? They have NO standards.

I think they do have one standard — The ends justify the means.

It is standard that can be used to justify any evil as demonstrated by totalitarians throughout history. It is utilitarian not logical or ethical. The left is consistent whether it is the anti-local police (they love centralized federal police as do all totalitarians) or PP eugenics or the destruction of healthcare.

Wow. Too bad nobody saw that defense of the TEA Party, ’cause they all have a big hate on for Kelly…

BTW, what Mushroom Media outlet is coving this story this way…or at all?

Leftist group – Even hard video evidence is inconsequential.
Conservative group – The tiniest innuendo defines each and every member.

I understand the point of the clip is to expose the hypocrisy of Democrats who were quick to blame the Tea Party rhetoric for the Tucson shooting while staying silent about the Black Lives Matter rhetoric. Democrats perceived the rise of the Tea Party as a threat to Democrat governance/power/elections. After all, the whole point of Palin’s map was to highlight Democrats who she believed were vulnerable to electoral defeat. So it was in the Democrats political interest to pressure the Tea Party into silence and to turn public opinion against it.

You seem to be making the cardinal error of thinking it isn’t happening because you haven’t heard about it happening.

I don’t think we want government “silencing” BLM. I think it’s wholly appropriate to police them, however. Where they cross lines, they should be prosecuted. They should be marginalized as a racist hate group.

I saw a discussion of the question “Is BLM a hate group?” on FOX, and Juan Williams was turning himself inside out to say no. His excuse was that the group doesn’t have the power to do much, so they don’t count as a hate group. I found that more than a little strange, because the KKK hasn’t been large enough to accomplish much of anything for decades, and they are still considered a hate group.

Well, there are some…an influential, tiny minority…who will soberly tell you that minorities cannot be racists. To be a racist, you must have pow-wah.

This is, of course, purely a lie. Individuals are racists, whatever pow-wah they have. BLM IS racism. When they took over Bernie Sanders in the NW, it was ALLLLLLLLLL about race, and only ONE race.

The KKK barely exists at all. When the SPLC claimed there were two active KKK groups in Rhode Island, our good host (who lived there at the time) went looking for them and found no evidence of their existence.

The “Westboro Baptist Church” barely exists — it’s just one extended family — and has no power to achieve anything at all, and yet it’s the #1 “hate group”.

So what are they really?

Why aren’t elected Republicans using their soapbox to condemn the cop hating rhetoric of the BLM?

Because the GOPe is cozying up to the BLM people talking with them (just like Obama/Kerry “talked” with the Iranians). [DeRay McKesson: “There have been talks with the staff at the RNC, nothing firm planned as of yet.” (emphasis added)]

The GOP establishment is not an opposition party, they are the other half of the CERC [Combined Elite Ruling Coalition].

Insufficiently Sensitive in reply to MaggotAtBroadAndWall. | September 2, 2015 at 2:20 pm

So why aren’t Republicans using the same tactics against BLM that Democrats used against the Tea Party?

They are. But there’s a difference: they don’t have the overwhelming tsunami of the Democrat/media blasting their story into the ears of the public 24/7. Selective omissions are the winning tactics of the media megaphone, and until Republicans can get their messages out at the same volume and number of repetitions, the public will never hear those messages.

Lie, obfuscate, deflect, deny…if you still wonder why Trump, Carson or Fiorina resonate with voters, it’s because they aren’t part of the freak show in Washington DC. These people speak as if they are talking only to themselves, far removed from any consequence or repercussion. I’m glad I cut the cord and no longer feel the need to watch this drivel on a nightly basis.

I find it both interesting and humorous that Kelly can be condemned one day for attacking Trump, and then a couple days later is celebrated for taking on the Dem party leaders over their support for BLM. My prediction is that we aren’t that far from the day when she takes over the lead in audience size from O’Reilly.

Oh, you want an explanation? OK, then.

The Tea Party, in the mind of “Progressives” and the MSM (but I repeat myself) are “white people”. White people, as everyone knows, are the oppressor class. ANYTHING they do or say is dangerous and offensive.

#BlackLivesMatter, on the other hand, is black people. Black people, as everyone knows, are victims, and the #1 rule of “Progressive” activism is, You do not question the moral righteousness of (our) victims. It’s the same response for a “gun violence survivor” going after gun rights. The fact that their policies and actions are counter-productive (at best) is irrelevant; their victim status automatically grants them the moral high ground, and you do not question the person with the moral high ground.

The Tea Party, therefore, can do no right, while #BlackLivesMatter can do no wrong.

Oh, and if you use your “victim status” to rail against the “Progressive” cause du jour (e.g. if you use your “gun violence survivor” status to advocate for gun rights, or your race to advocate for real equality of opportunity), you’re not one of “our” (read: “Progressivism”‘s) victims. You are an anomaly, an “Uncle Tom”, a brainwashed dupe of the “gun lobby”. A pariah. A social problem.

I’m still verrry tired of Fox and their establishment-at-all-costness.

One by one – if certain ‘hosts’ were on, I’d just switch ’em off… Geraldo, Shep, Juan, Colmes, Beckel… (Note to Fox: giving LEFTISTS air time… is not ‘fair and balanced’… it’s just dumb… your bleeding viewers)

Cannot stand Megyn any more either…