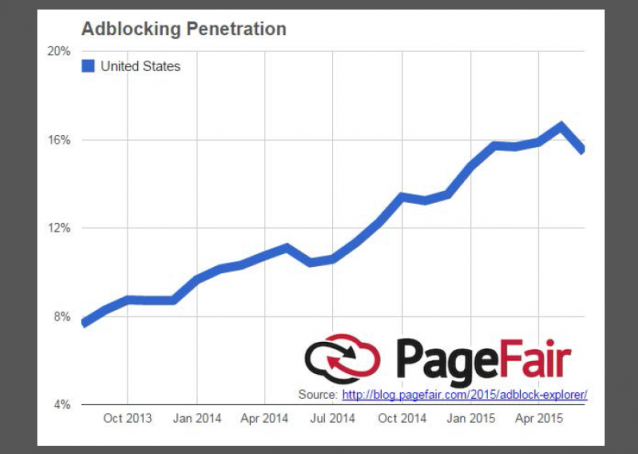 [WAJ Note: Given the vigorous reader discussion about Ad Blockers, I asked Jason Boisvert, who has contacted me via Twitter in the past about auto-play issues, if we could repost his original blog post, and he agreed.]

Many websites today have autoplay video/audio ads, even when they aren’t supposed too. This postat the webcomic Erfworld lays out the basics as to why. In short, advertising networks are paid for ads from producers and host them on their networks. The networks appear on many sites, and those sites receive a portion of the revenue from the networks.

It turns out that the best-paying networks “accidentally” let a larger portion of “malicious” (that is, with unauthorized function) ads through. These ads play audio when the websites running them have demanded no-autoplay, crash websites with long scripts, lock the page so the ad is on-screen, making it impossible to scroll and even redirect mobile devices to the purchase page of whatever they are advertising. Somehow, the networks that pay less don’t have the problem of “malicious” ads “sneaking through” and “accidentally” breaking webpages or blasting noise and music.

At the moment, these ad companies are protected. The obnoxiousness of the ads is often related to the uselessness of the product, so annoying or even destructive ads enhance revenue – the terrible reputation of the company is not a factor for someone selling a cell-phone game no one has heard of. Most people won’t quit a website for playing an audio ad sometimes, so the ads still get plenty of viewers.

Even if a website goes down, the ad networks are massive – killing a smaller website won’t noticeably impact a network’s revenue stream. Finally, the ad network is not the company selling the particular product, so even if the product is some people would normally buy and runs the risk of a boycott, the network itself is safe, because no one knows who it is.

So what options exist for people to avoid destructive, harmful, annoying or otherwise destructive ads.

While the ad-blockers are simple and elegant solutions, even top-tier websites, sites like Legal Insurrection and webcomics like El Goonish Shive need the ad revenue to maintain their level of quality production. (You may have noticed that I have trouble writing three articles a week. Dan Shive regularly produces 6 comics a week. That’s a full-time job.)

2) Complain to the websites.

Erfworld, EGS and LI have all responded quickly to my complaints about autoplay ads and deserve credit for being on top of it. Erfworld’s staff, in fact, spent roughly 120 man-hours to sort which ad networks could be trusted. Here’s the problem, though: they shouldn’t have to. The whole reason ad networks exist is to provide third-party support for managing ads. If a website says “No autoplay ads or redirects”, that should mean no autoplay ads or redirects. The individual websites allow these ad networks to take a part of the revenue for themselves, this is part of what they are being paid for.

3) Expose the ad networks who have or continue to “accidentally” let abusive ads “slip through”.

I don’t believe that these ad networks are consistently missing ads with exploits or that ignore permissions. It happens too often and too frequently to be an accident. Every now and then, I could understand if an advertiser cheats a network and tricks them into displaying an abusive ad, but when the same ads consistently “break” the rules on multiple websites in the same way, I am forced to conclude that there is an understanding between the advertiser and the network.

Right now, according the Erfworld’s results, the ad networks that pay the best routinely have ads that the sites have previously objected to. There needs to be an economic cost to these companies. Their reputations need to suffer.

When people look for ad networks to provide some extra revenue, they’ll find which networks cheat and which don’t. That will make the latter more valuable, more people will host them, and more people will try to put ads on them, driving up the price of putting those ads up and therefore the revenue paid to the sites you want to support.

In addition to being a Legal Insurrection reader and commenter, Jason Boisvert is a Baltimore-area writer and videographer who writes at jasonboisvert.blogspot.com and maintains a video archive at youtube.com/darktechobserver. He is also Secretary of the Baltimore Young Republicans.

Seeing that is a real honor.

I killed my Ad-Block Plus for Legal Insurrection. But I still haven’t received my free toaster.

ok, jk about the toaster, but I did disable ABP for LI. Least I can do and all that. Thanks for all you do. Really.

I too have disabled my ad blocker for LI and a handful of other websites. The percentage of badly behaved ads has declined over the years, which makes it all the more jarring when it happens.

What angers me the most is when websites autoplay their own content. Really, if I want to see the video I’ll click the damn button…

Thanks for the update, William — and Jason!

Seeing this article reminded me to give adblock-off browsing another try, so I’ve turned it off. At the moment, my ads are: an ad for JetBrains’ C++ tools / their booth at CppCon [I use their development environment], an ad for a special Adobe Creative Cloud student discount [I’m also a graduate student], an ad for AmazonFresh [which I’ve been meaning to try] and ads for jeans and Sprint [meh, but they’re just “there” and doesn’t forcibly redirect me anywhere]. Neat!

So, if anyone else is in the same boat, come on in, the water’s fine (at least for now).

Dr. Jacobson and team, I don’t know the details but thank you for everything you did to make the ads a livable experience for your guests.

They work very hard and move very quickly to resolve issues of crooked networks. It’s a lot of effort, I’m sure.

Is there a site or service that rates these companies? So you don’t have to go through this laborious process? If so, what is the name of it? Thanks.

Not yet. S’why I wrote the article. I’d like to try and build one.

What is staggering to me is that after insulting you with their terrible lock the page ads and other tricks, they actually think that there are people who will but their product!

If people weren’t buying the product, they wouldn’t use the obnoxious ad tactics.

The advertisers are jerks, not idiots.

Check your local law regarding where you’ve entered into the contract with the various adware networks and programs.

I would think that this would be a very nice little niche for some enterprising young lawyer to take on. If nothing else, it appears to be a Breach of Contract issue. Damages might be difficult to prove, but perhaps there could be some sort of slander or libel action by false light representation which carries a statutory damage number? Depending on the representations made, you might also have some form of Deceptive Trade Practice lawsuit.

Considering that these ads are running software on your computer, you might want your young lawyer to see if he can get law enforcement to go after these people for violating the CFAA.

I know that some of the things these people do on your computer would have been considered such in the 80’s and 90’s if done on a VAX or Unix machine.

Before you pooh pooh such an idea, consider that you may have added memory, a new graphics card, or even upgraded your computer because of performance problems caused by these ads.

I suspect the ad networks are set up in offshore places with lax enforcement. Operating from the USA invites not only federal, but state and local regulation and costs, so even completely legitimate companies consider incorporating elsewhere.

Another example of how the leftist regulatory environment actually leads to the opposite result.

All at Legal Insurrection,

Again, my most gracious thanks for continuing to address this issue.

I try to search tech sites to “understand” what is happening but flounder in the depths.

Life is about being prepared… not preventing everything… just being aware.

LI is providing a translation that is helping me be aware.

I always keep my computer speaker off until I need it. It’s off right now. I am never bothered with auto-play because I never hear it. It just became a habit with me. I am reading, not listening. If I want to hear a video I will turn it on. It takes a click.

I’ve turned off AB+ for LI, but I’m sure I still effectively block a ton of them because I don’t trust the networks enough to allow JS and I continue to block that. For just plain JPEG and HTML my browser is available, but there are just too damned many vulnerabilities reported for me to feel safe with scripts.

Advertisers who use autoplay, with or without sound, are stealing my computer resourses against my permissions. They are thieves and should be prosecuted.

ABP was the only tool I found which prevented the frightening pop-under window. What is the purpose of an ad which does not claim focus? I always try to visit an Amazon affiliate before checking out.

I too have AB+ turned off for LI, Market-Ticker, and a few other places. Normally I leave it on for browsing, as too many sites go crazy with ads. Breitbart has an extremely annoying combination of pop-up “Candidate Polls” as well as autorun videos, even AB+ doesn’t deal with them adequately. Grrr! 😡

Thanks to all who keep tabs on the ads here, so that I am not bothered with them!

I run several websites, and I have declined to include any ads (or fundraisers) whatsoever, even though it means I have to be creative in finding ways to fund the websites. When I visit websites there have been far too many times I’ve had ads pop up for causes in direct opposition to the cause of the web site where they appear, and had audio and video ads “hijack” my browser and make it impossible for the user to navigate to the desired page.

As soon as the decision is made to allow ads [in order to pay for a given website] the damage is done; users must fight their way clear to find content, and to avoid being hijacked by adware and spyware. Opening the door to advertising is like opening the door to anarchy; the only good that comes from it is that which benefits the companies doing the advertising.

If you lie down with dogs, it’s impossible to avoid fleas.