“Israelis live in the real world, not the world of Obama’s delusional hope”

“Israelis live in the real world, not the world of Obama’s delusional hope”

My guest column at IJR Review 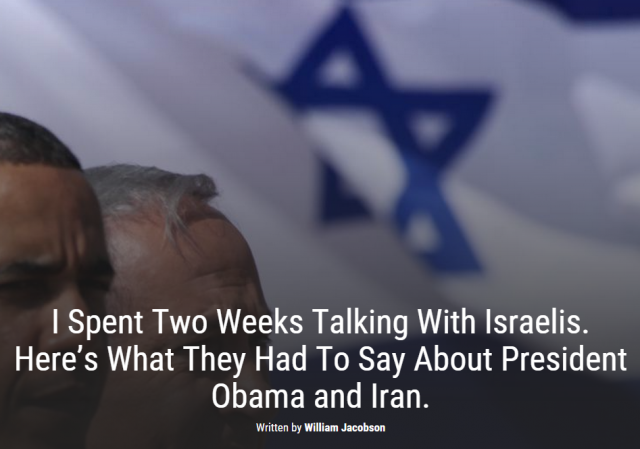 As part of my effort to reach new audiences, I have a post at IJ Review regarding my recent trip to Israel, I Spent Two Weeks Talking With Israelis. Here’s What They Had To Say About President Obama and Iran:

While anecdotal, our interactions were consistent with polling showing that Israelis don’t trust Obama on Iran and that Obama has low favorability. That polling has grown worse for Obama in recent weeks.

In other words, Israelis live in the real world, not the world of Obama’s delusional hope. And they don’t appreciate Obama taking risks with their lives.

You want more? You know the drill.

Here are the links to my Israel posts:

Muslims will gleefully kill other Muslims to get the chance to kill Israelis.

That is the reality of the Middle East.

Obama is perfectly willing to play games with Israelis’ lives, because he knows he’ll never have to take the heat for his recklessness. Iran won’t nuke Israel in the next year and a half, meaning Obama will be safely out of office, and he and his lapdog media will conveniently have some other president to blame, for the inevitable consequences of his idiocy.

It’s the same with all his other foolish policies. He can push a disaster like Obamacare off on the rest of us, knowing that he and his family will always receive the finest, state-of-the-art medical care from the world’s best physicians, with no regard for the cost (since taxpayers will be paying the bill). And he can flood our neighborhoods with poor and diseased and criminal illegal aliens, knowing that he will go from his guard-gated, taxpayer-funded D.C. mansion to a multi-million-dollar mansion in Hawaii, surrounded 24/7 by Secret Service teams funded by taxpayers.

I hope he dies a slow, painful death, an incurable homosexual-related disease.

I have never hated a man before, but watching as he destroys my country has pushed me over the line.

… he will go from his guard-gated, taxpayer-funded D.C. mansion to a multi-million-dollar mansion in Hawaii, surrounded 24/7 by Secret Service teams funded by taxpayers.

If he will simply go there and shut the hell up instead of kibitzing the next (hopefully conservative) President from the sidelines, I’d say it’s money well spent.

Iran won’t nuke Israel in the next year and a half, meaning Obama will be safely out of office

I am not so sure that using the precedent of King -v- Burwell that the Courts will not find [in support of an Attorney General’s ukase] that the country really only intended to limit FDR, and that Obama can run for 3rd, 4th, etc. terms with no opposition. Divination of intent now over-riding legal and constitutional text.

The death of the rule of law notwithstanding, however, assuming that the Iranians are that far from a deliverable nuke [note that I did not say missile deliverable nuke] or dirty bomb is . . . . perhaps overoptimistic.

That’s paranoid nonsense. If there is one thing in this world we can be certain of, it’s that as of 20-Jan-2017 at 12:00:00 EST, Barack 0bama will no longer be president, and the armed forces will stop taking his orders (unless the incoming president names him Defense Secretary). He’s no idiot, so he will not even try to stay in office one second longer than that, because he knows exactly what would happen if he did try.

Israelis know that they cannot rely on any other country, including ours, to provide them with security. “Never again” requires them to defend themselves. When the time comes, Israel will likely do what it must do, attack and destroy Iran’s nuclear capabilities. If and when that happens, the world will condemn them for it while secretly breathing a sigh of relief that someone had the courage to do what must be done. Meanwhile, the president will dither around negotiating with people who apparently, from their conduct, have no intention of negotiating in good faith or keeping any promises they may make. We have another Neville Chamberlain at the helm, a naive appeaser.

You do Chamberlain an injustice.

He was a patriot, and a big part of his pact with Hitler was motivated out of a recognition that he had to buy time for the British to gear up for war.

And he did. Churchill knew the man and loved him, while often eschewing his counsel. He still kept him on as a valued member of his cabinet.

Obama is no part as fine a man as Chamberlain.

Never attribute to naivete’ and incompetence that which is adequately explained by evil.