Rosie Perez: Hillary has so many accomplishments, I can hardly name any

Rosie Perez: Hillary has so many accomplishments, I can hardly name any

“She created — it goes on and on and on” 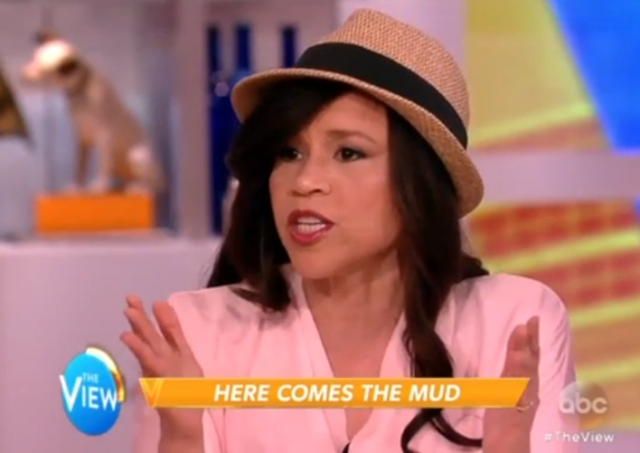 It’s becoming an easy video gag – stick a microphone in front of a Hillary supporter, and ask to name her accomplishments.

This time, Rosie Perez did the gag on herself, as NewsBusters reports:

On Thursday’s edition of The View on ABC, co-host Rosie Perez took offense at Jeb Bush for suggesting Hillary Clinton had no accomplishments in the Senate or as Secretary of State in an interview with Sean Hannity on Fox News. ABC’s graphic on screen read “HERE COMES THE MUD.” She fell back on a weird list claiming Hillary unveiled a food-security program and saved a Turkish-Armenian accord, and prevailed over Joe Biden to “send an additional 21 troops” to Afghanistan….

PEREZ: You know, she unveiled the Global Hunger and Food Security program. She prevailed over Biden to send an additional 21 [sic] troops to Afghanistan. She saved the signing of Turkish-Armenian accord. She played an important role in getting international support on Iran sanction [?] She created — it goes on and on and on. And she was instrumental with women across the world, of really ending violence against women worldwide. And you know, it’s just, it was just really out of character. I don’t know Jeb, but what I’ve been seeing of him, it seemed way out of character.

It turns out Perez was reading from an old U.S. News opinion piece by liberal talk-show host Leslie Marshall posted on February 19, 2014.

I think Greg Gutfeld on ‘The Five’ summed this video up when he said that listening to ‘The View’ for political analysis is like going to Jiffy Lube for sushi. Need we say more?

Greg Gutfeld is an idiot.

Obviously due to time limitations, Rosie Perez was unable to include the following Hillary Clinton accomplishments:

You know, she unveiled the Global Sushi and Oil Change Security program. She prevailed over Biden to send an additional 21 [sic] oil change associates to Jiffy Lube. She saved the signing of the Japanese-Jiffy accord.

A hastily executed reboot in the summer has failed to reverse the show’s ratings fortune…down 9 percent among its target audience of women 25-to-54.

From dancing on Soul Train, to poorly done verbal tap dancing on the view.

China knew what they were doing when they recently banned ‘celebrities’ from hosting talk shows. Censorship for sure, but they know rot when they see it.

I rock a fedora. Rosie Perez does not.

Very dangerous—the young Frank Sinatra could pull it off, but most mere mortals, not so much.

Well, here is a naughty-ish little Irish Poem to describe this:

A Rosie Glow???
An Irish Poem by Squeeky Fromm

There once was a twit named, Perez,
And who gives a sh-t what she says???
‘Cause really, would we
Be surprised to see,
Her on kneepads in front of the Prez???