Why? Because life is too short not to enjoy a good hillbilly heckling. 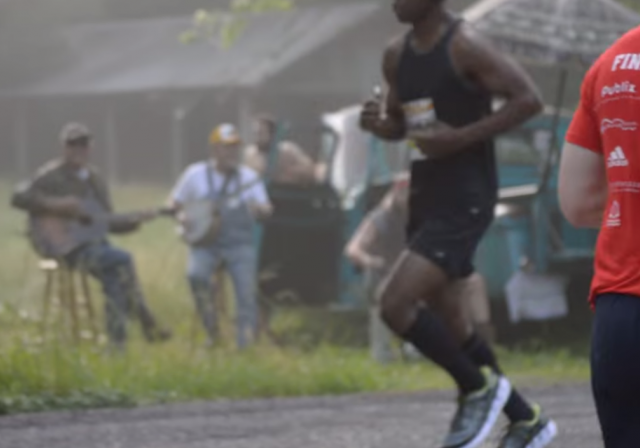 Don’t ever change, Internet. Otherwise how else would we be able to enjoy the simple pleasures in life, like this hillbilly banjo band hilariously heckling marathon runners?

From a local Fox News affiliate in Franklin, TN:

Marathon runners in Leiper’s Fork were greeted with an unexpected surprise along their route in Franklin Half Marathon a few weeks ago.

Runners usually expect to see friends and family as they run, but it’s not often that they see a hillbilly band parked along the side of the path to heckle them.

Serenading runners with “Dueling Banjos”, the hillbilly band set up on the back of a truck, under the cover of a patio umbrella. Hollering things like, “where ya going?” “where y’all running from?” “what’s your hurry?” and “slow down young man!” one gentleman beat a trash can lid on the side of a water trough and another bare-chested, overall-clad man danced a jig and chased runners around. Yet another man, who was lounging atop a five gallon paint drum in cut off cammo pants, joined his overalled companion in dancing a jig while brandishing an ax.

Why? Because life is too short not to enjoy a good hillbilly heckling.

The runners should be grateful it was just a bunch of hillbilly pickers. It could just as easily have been a bunch of bored cattle drive cowboys tempted to practice their lassoing skills.

Those runners sure were dressed funny.

Shoot, half of ’em are running in the wrong direction! Bunch o’ danged hippies.

I’ve lived all over the country but my heart will always be in the South.

Southerners are the most misunderstood and under-appreciated people in this nation.

Thank you for that.

I blame the movie “Easy Rider”.

I blame Obama and the Democrats!

I know this is an old thread, but I just had to sign in to say, thank you. Lived in Miami since 1956 but I’ll always be a Tennessee girl. Miss you, Ole Rocky Top.

It’s Tennessee. We have a weird sense of humor here. And Deliverance was filmed in Georgia, not Tennessee. We just like messing with the rubes.

Were the runners made to squeal like a pig?

Thank you for this.

My late, and most dearly beloved, Daddy, said to me while I was training for a marathon, “Honey, why are you running? Nobody is chasing you.” This clip brought that, and a smile, to mind. 🙂

I’d set up a table at about the 20 mile mark at have a cooler full of beer and a sign reading “Free beer if you quit now!”

Or possibly, “You could stop now and check your Miller time!”

It’s all in good fun, but if those banjo boys ever have to outrun a Nazi dentist and his gang, they’ll wish they had learned to run it, too.

why would a good ol’ boy run from a Nazi when they could just shoot him instead?

Only Vonnegut book I could stand. I went thru my Vonnegut phase in high school, then realized pretty much everything her wrote was garbage…except for “Mother Night.”

I was floating down the Kings River in CA one summer many years ago with a group of friends. We were way out in the middle of nowhere drifting along serenely when we rounded a bend and encountered a barbershop quartet standing on the bank and serenading the passers by. It was very surreal.

That was some GOOOD acid, rat thar…

That’s some good pickin’. Wish I could what was on the cardboard sign.

My husband who’s a cowboy from Okeechobee loves this. He watched it several times before letting me stop winding up the computer.

That’s mean. When I ran the longest race of my life, that required going up one of those steep San Francisco hills, I was planning to stop and walk. But people at the side of the road encouraged me, saying, “You can do it! I know you can do it!” I ran the whole way, because of some nice people on the side of the road that wanted to encourage us runners, not heckle us.

the headlline is wrong.the musicians were not harassing– this is common;y done during marathons and s enjoyable to runners — we love it!