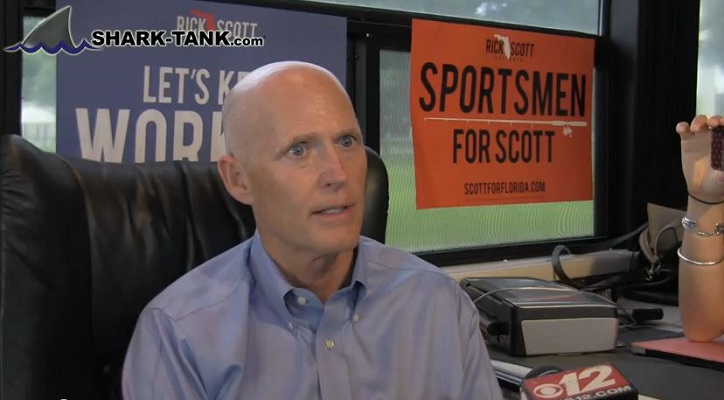 In 2012, the Supreme Court ruled that states have the right to refuse the ObamaCare Medicaid expansion without penalty to other, existing, federal Medicaid funding.  Following is the summary from SCOTUSblog:

The Court’s decision on the constitutionality of the Medicaid expansion is divided and complicated.  The bottom line is that: (1) Congress acted constitutionally in offering states funds to expand coverage to millions of new individuals; (2) So states can agree to expand coverage in exchange for those new funds; (3) If the state accepts the expansion funds, it must obey by the new rules and expand coverage; (4) but a state can refuse to participate in the expansion without losing all of its Medicaid funds; instead the state will have the option of continue the its current, unexpanded plan as is. [emphasis added]

It is quite surprising, then, that the Obama administration is trying to use federal low-income pool (LIP) funding to, according to Governor Scott, “coerce” Florida into accepting the short-term federal funding of the ObamaCare Medicaid expansion.

There are a number of good reasons for refusing the Medicaid expansion: Not only are health outcomes under Medicaid substantially less than those under any other health care or health insurance program, but this federal funding effectively runs out in only three years, leaving states to foot the hugely-expanded Medicaid bill. Governor Scott has said that he is unwilling to pile such crushing debt on the backs of Florida taxpayers:

According to The Tampa Bay Times, the “U.S. Centers for Medicare and Medicaid Services, or CMS, is still deciding whether to renew a $2.2 billion program called the Low Income Pool that helps Florida hospitals treat low-income patients.”  When the LIP decision was explicitly tied to accepting the Medicaid expansion, Governor Scott decided to sue:

The negotiations took a turn Tuesday, when CMS told Florida’s Agency for Health Care Administration that any decision regarding LIP would be tied to whether the state accepts federal Medicaid expansion money — a politically charged policy option that Scott once supported, but now opposes.

“Not only does President Obama’s end to LIP funding in Florida violate the law by crossing the line into a coercion tactic for Obamacare, it also threatens poor families’ access to the safety net health care services they need,” Scott said.

He called the actions “outrageous and specifically what the Supreme Court warned against.”

CMS declined to comment on the planned lawsuit. But spokesman Ben Wakana said Florida, like other states, “is free to implement Medicaid expansion or not.”

Sure, Florida, go ahead and refuse to implement Medicaid expansion . . . it will just bankrupt you if you do so.  This point may be familiar to many of us who remember a similar statement from Obama regarding the coal industry:

Coercion and “nudging” seem to be the Obama administration’s favored tactics . . . even if, as Governor Scott argues, they violate a recent Supreme Court ruling.

We need thousands of lawsuits against the Obama Criministration and against the Democrat Party!

GO, Rick!! As a So.California transplant to Central Florida, I’m very, very thankful and appreciative for this “strange/quirky” Non-Politician who Gets Things Done.

…including slapping the snot out of the arrogant, needy, perpetual appetite of Charlie Crist in last November’s election. He ain’t smooth. He ain’t slick. He ain’t real photogenic. He’s a rock-ribbed conservative & successful businessman who GET’S IT DONE.

The diametrical opposite of Governor Moonbeam Brown in my lifelong home state.

Medicaid has been repeated demonstrated by comprehensive studies – NOT small sample surveys – to have no effect at all on health outcomes compared to being uninsured. NONE.

It should be abolished completely and immediately. Another failed leftist program.