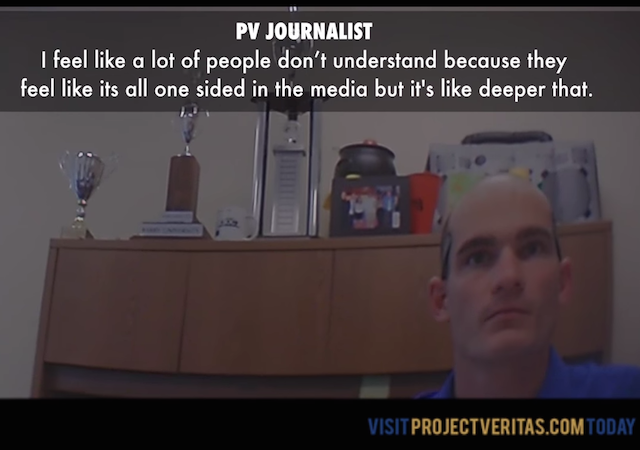 Late Last month, Project Veritas released undercover footage from an investigation into the student org registration process at Barry University. A Barry student and PV plant named Laura secretly recorded several Barry staff members as they gave her advice on how to create a student group sympathetic to the Islamic State.

The reaction to the video was predictable, and Barry fielded considerable bad press because of it.

About a week after the video was released, Laura was suspended.

Project Veritas set out a press release explaining what happened, and why they believe Laura is being punished for her work with PV:

The vague language used by Barry University in issuing the suspension, coupled with the timing, suggest that Barry does not have an actionable claim against Laura. Rather, it appears that they object to the negative publicity the school has received due to the statements of their administrative and academic staff.

The charges levied against Laura in her suspension notice were far from explicit and ambiguously read “your alleged actions were the cause root [sic] of disruption of the University community and the creation of a hostile environment for members of the University staff.”

Perplexingly, Laura received an award for being the most outstanding senior in the Communications Department after the release of the video. “It is difficult to comprehend how Barry University simultaneously deems Laura as an honor student and a disruption; with each resulting in a formal University action: an official University honor and an interim suspension,” says Founder and President of Project Veritas James O’Keefe.

As of right now, we don’t have any other information about Laura’s suspension. No hearing date has been set, and no specific allegations have been levied against her. She is banned from campus, which means that she can’t attend her classes.

We at Legal Insurrection have contacted officials at Barry asking for comment, but haven’t received word back yet.

Here’s the video that resulted from the Project Veritas sting at Barry:

The actual suspension e-mail was forwarded along to us by Project Veritas. Here’s the redacted version:

Interim Suspension denotes that, for the term of the suspension, you are not allowed to be on the Barry University campus and are not permitted to attend classes. Any violations of the Interim Suspension terms outlined above will result in additional conduct charges.

If you have any questions or concerns, please do not hesitate to contact me via email at [xxxxxxxxxxxxxxx].

Sounds like a good way to help feed a hungry lawyer.

“Creation of a hostile environment” AKA Upset a lot of people with the truth.

If this were a case I was taking on, an EMERGENCY INJUNCTION and Temporary Restraining Order would have already been filed to lift the Interim Suspension.

Make the University come into COURT and defend it, IN PERSON, before a Judge as to why this should not be stopped as “irreparable harm” which no amount of monetary compensation could undo in the future.

Jack booted tyranny needs to take a boot up the wazhoo.

I hope Barry University sees legal action taken against them for this obvious retaliation for being exposed and humiliated.

My bad. Hit the unlike button by mistake.

“cause root”??? Is this a case of dyslexia or is Ms. Alvarez using English as a second language?

I also think that Laura has a case here.

However, her actions seem to be analogous to the actions of the reporter that caused the hullabaloo over Memories Pizza. Possibly worse, because the pizza parlor owner at least knew he was talking to a reporter.

It seems a bit hypocritical to decry the one and defend the other.

There is a sort of parallel.

Howdy, is that you, anoNY?

The pizzeria reporter basically lied, tried and succeeded in making people think the pizzeria had already refused gays, which they have never done. She started a shitstorm that shut the place down.

PV goes undercover and aks questions. The marks can answer any way they wish. There is no cooercion whatsoever. Barry University staff answered very, very poorly, so willing to support terrorists.

Barry University no doubt does not allow firearms on campus. But terrorists? No problem!

There is no analogy and Project VEritas is in no way responsible for the answers they get. The answerers are.

Is Dana Loesch setting up a new Go Fund Me campaign?

Not familiar with Barry. Does it have a large-enough endowment to cover the judgement they will have to pay to REDACTED, Laura after the inevitable lawsuit?

Additionally, Project Veritas probably also has sufficient grounds for their OWN libel suit against Barry for the University President’s statement that

“The images and video released were edited and spliced to unfairly represent the university and staff being featured. It is reprehensible to think any organization would acquire video and edit in such a way as to denigrate the reputation of Barry University or its staff.”

The above statement is quite likely a knowing lie by the University President. If Project Veritas releases the whole video and shows it to be a lie, a libel suit should be a slam dunk.

Suspended even though there’s been no hearing or even specific charges?

Or as the Queen of Hearts would say, “Sentence first — verdict afterwards.”

I am not a lawyer, but could attempt to commit or conspiracy to commit: 18 U.S. Code § 2339A – Providing material support to terrorists apply here?

Both Project Veritas and Barry University need to be very careful here.

Awww, rats. I worried about that, when I thought to call the FBI field office. That, or some form of entrapment.

As it appears only one party actually had sincere intent to aid terrorists conspiracy is lacking.

Hmmm – How did Project Veritas happen to zero in on Barry U?

Is there some indication that the faculty or Catholic Church which owns/operates Barry is sympathetic to or aiding islamists groups, terrorists or is anti-Semitic, anti-Israel, or anti-American?

There had to be a reason to target this particular school.

After Pope Francis piped up in defense of Obama’s non-agreement with Iran, one has to consider what might be going on at this South Florida campus.

Uncle, Barry was established by an order of Dominican nuns based in Michigan in 1940. It is unranked academically, and has about $25 million in endowment. “Social Justice” is one of their principal goals, so perhaps that is what made the college seem vulnerable to O’Keefe. Certainly their bureaucrats seem to be almost mindlessly in favor of any project which smacks of SJ. I’m a conservative Catholic and it seems to me that Barry deserves serious blowback on this. It’s a low ranking college with a do-gooder mindset and can easily be made to look foolish. Barry made a very big mistake in suspending the student who collaborated with Project Veritas. She was boringly, repetitively clear on what she wanted to do and the bureaucrats never said, “Hey, wait a minute! That is wrong and you could go to prison for that and so could we!”

You may not realize, but the Catholic Church in SFL had an ARCHBISHOP who was involved in the gay lifestyle, had a sex-enhancement drug business and more.

There are Catholic clerics, nuns and priests, who are Islamist sympathizers, pro-communist, etc.

My suggestions are not out of the realm of reason and evidence.

I think I’ll sue and make them change their name…

Geez, Henry, I was hoping to win the lawsuit, not throw it…

But he’s got links! Lots of them! And not just any links! Links from the New York Times! Slate! The Atlantic! Even from the Los Angeles-f**king-Times!

But if a whisper of racism were uncovered this student would be honored for her courage.

I wonder how many Federal crimes the faculty committed by what they said? Lessee… Conspiracy to give aid to a terrorist organization, conspiracy to give aid and comfort to an enemy of the United States. What else? By suggesting she change the name of the club for fraudulent reasons, and getting U.S. corporations involved are also FTC and wire fraud, even postal crimes. And don’t tell me they didn’t know they were breaking the law.

Given their adversion to Truth and Justice, they should consider changing their name to Barry Soetoro University.