“Either there is mutual respect, or the conversation is over” 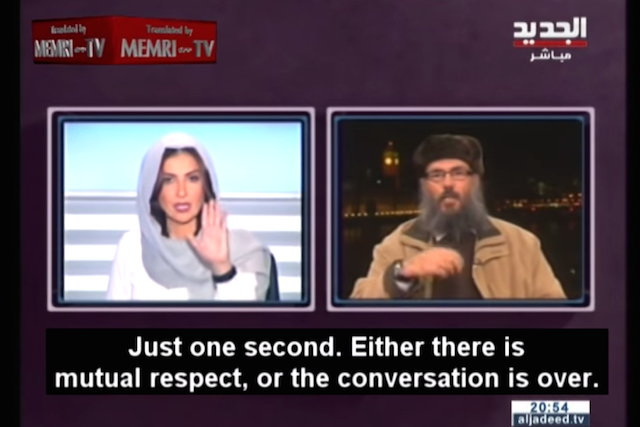 Today was International Women’s Day, and it came and went with the kinds of video and hashtag activism that usually define tribute days. Amongst all the shareables about glass ceilings, pay gaps, and leaning in, shone through one fantastic example of how real gender-based discrimination makes its way into the spotlight in societies that don’t demand equality.

London-based Islamist sheik Hani Al-Seba’i really didn’t know what he was getting into when he tried to play gender politics during an interview with Lebanon’s Al-Jadeed TV anchor Rima Karaki.

More from the Telegraph:

Al-Seba’i was being asked about reports that some Christians are joining Islamic State fighters, when he went off on a tangent and started talking about the history of Christian involvement in the Middle East.

“Dr Al-Seba’i, let’s focus on the present,” Karaki suggested, adding that time for the discussion was limited.

“Listen, don’t cut me off. I will answer as I please … what kind of behaviour is this?” Dr Al-Seba’i asked.

When Karaki reiterated the time constraints, Al-Seba’i lost his temper and told her to: “Shut up, so I can talk.”

“It’s beneath me to be interviewed by you, you are a woman who …” he continued, before his microphone was cut off.

“Either there is mutual respect, or the conversation is over,” Karaki said, as she terminated the interview.

One for #IWD2015. Rima Karaki takes down guest who said beneath him to be interviewed by woman. http://t.co/CLA8j8ZX5o via @LebaneseProblem

Happy International Women’s Day, Rima, and thank you for showing us what it actually means to stick it to The Patriarchy©.

Obama and the Democrats are gonna need a diaper change after seeing this!

Make ’em stew in their own juices, as it were…

Which is worse: listening to that dialect for 5 minutes, or listening to Hillary Clinton shrieking?
https://www.youtube.com/watch?v=NJxmpTMGhU0

She gave him the finger.

Well, all ten, really. He got BOTH hands.

I hope she has good security….

Needless to say, she now needs to watch her back.

She’s an educated, outspoken woman in Lebanon, she always has to watch her back.

Islam will change or die because of women. The change seems slow to an individual, by by the standards of history, it’s an eyeblink.

I wish you were right but I’m afraid you are only dreaming. The women of Afghanistan, Pakistan, Saudi Arabia, Iraq, Iran, Turkey and most other muslim countries are very subservient and cowed by sharia law and the harsh punishment meted out by the religious police. Have you seen the execution on a busy street corner of the muslim woman who has a red jacket on under her burqa that barely shows. That was enough for the loony raghead to declare her in contempt of Allah and shot her as she kneeled. In parts of the world where women are respected even, if not equal, women can have a huge effect on their society. In islam they are just killed by anyone who is offended because as you know it is the religion of peace.

That’s a left hand too!