Will Feds try a run to the appeals court?

In its Emergency Motion, the Feds threatened that if U.S. District Court Judge Andrew S. Hanen did not grant the stay by the close of business on Wednesday, February 25, the Feds would seek an emergency stay from the 5th Circuit Court of Appeals.

The plaintiff States argued that that was too short of a time for them to respond, considering the Feds took a week to bring the Emergency motion.

Judge Hanen just ruled that the States had until Monday, March 2, to respond. (Order below). [Update: Changed to March 3 – see Amended Order below.]

Will the Feds now run to the Appeals Court? Or wait until Judge Hanen rules next week? Normally, a litigant has to request relief from the trial court first.  I’m not sure, as I write, whether a modest delay in the trial court would cause the 5th Circuit to refuse to hear an emergency motion until the trial court rules.

As of this writing, there has been no stay motion filed in the 5th Circuit according to the electronic docket.) 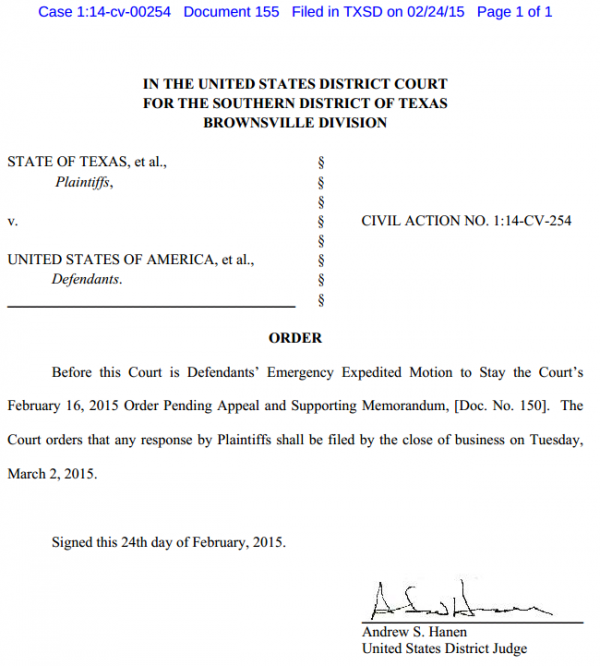 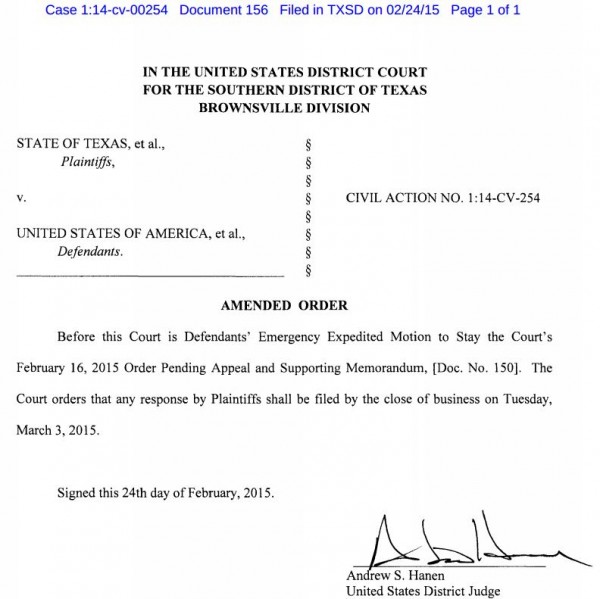 The emergency is Obama’s pen.

It leaves a terrible mess wherever Obama uses it.

Based upon wyntre’s comments (below), it must have been Obama’s phone rather than his pen.

Can one of the resident legal eagles explain this?

I thought the POS never issued an EO, that DHS head Jeh Johnson implemented the new immigration rules through some type of memorandum on November 20, 2014.

Is that true and if so what are the implications?

This is what I was referring to:

U.S. District Judge Andrew Hanen’s 123-page opinion makes it clear the issue at hand is not an executive order, as widely believed, but a memorandum issued by Department of Homeland Security Secretary Jeh Johnson deferring deportation of certain illegal aliens, as WND was first to report, Dec. 4.
Hanen’s opinion opens with: “This is a case in which twenty-six states or their representatives are seeking injunctive relief against the United States and several officials of the Department of Homeland Security to prevent them from implementing a program entitled ‘Deferred Action for Parents of Americans and Lawful Permanent Residents.”

Noting that the case does not pertain either to a law passed by Congress or to an executive order signed by Obama, Hanen noted the White House promoted the idea that the president had signed an executive order in Las Vegas Nov. 21, 2014, the day after his address to the nation on immigration.

The president was seen signing two presidential executive orders, but they were not related to deferring prosecution of illegal aliens.
Hanen wrote that “both sides agree that the president in his official capacity has not directly instituted any program at issue in this case.”

“Regardless of the fact that the Executive Branch has made public statements to the contrary, there are no executive orders or other presidential proclamations or communiqué that exist regarding DAPA [Deferred Action for Parents of Americans and Lawful Permanent Residents],” he said.

“The DAPA memorandum issued by Secretary Johnson is the focus in this suit,” the judge stated.

Good catch. I recall the media talking about “Obama issuing an Executive Order” but none of them could find it.

According to this interview on Special Report the fact the POS didn’t sign an EO is irrelevant.

Pruitt: That is correct. The straight answer is that he has a series of memos that has been prepared for him by various components of the executive branch. They are acting on that. Field offices and individuals in ICE are acting on the authority of those memos. There isn’t an executive order per se.
Baier: Now wouldn’t there have to be?

Pruitt: No. I mean I think that as far as the action the president has taken, we know what his instructions have been to those agencies. We know the violations that have occurred by virtue of those instructions, but it is not in the form of an executive order. It is not necessary for a legal challenge. I think it is only necessary to provide a summary of what the president has done. But here we don’t have an executive order specifically. … There is no executive order but it doesn’t effect the ability of the states to bring the action.
Pruitt is exactly right. Whether Obama used an executive order, or a memo, is irrelevant. His administration’s policies have been clearly spelled out and that is all the states, or anyone else that can establish standing, needs to sue and stop this executive amnesty.

That’s why the judge based his ruling upon failure to comply with the APA.

There’s your Presidential Memorandum, and there is no real, functional difference between an order and memorandum. You can see that from the memorandum, directing certain actions.

The WND piece confuses terms and actions. Jeh Johnson issued his own memorandum persuient to the Presidential memo, but apparently exceeding the ScamWOW directives.

Some pieces in WND have to be taken with a grain of salt.

I get that WND can be unreliable but several other stories reported basically the same thing.

As a layperson the mixing of terms gets confusing. Is a “Presidential Memorandum” the same thing as an “Executive Order?”

And does it matter?

By the amount of play the term gets in LSM you’d think it was etched in stone but apparently that isn’t the case.

Thanks for the insight.

As I pointed out when we visited this issue last, there is no functional difference between an “order” and a “memorandum” directing that certain things be done.

An agency head who acted without statutory authority or executive (presidential) directive would have been immediately bench-slapped…kind of at a minimum. You would not see a closely worded PI as we find here.

Not infrequently, agencies overstep their mandates, and we’ve seen the courts jerk their chains smartly during the last few years.

If my conjecture is correct, Johnson (who I consider a very dangerous Obami) got ahead of his directions in issuing his memorandum, or did what Obama himself has no power to do. I’ve not read the holding by the Court, so can’t say authoritatively.

I DO hope that Judge Hanen holds the line.

My conjecture is that Obama didn’t want his name on a directly unConstitutional action. So his minion can take the heat if it doesn’t go well.

Jeh Johnson issued memoranda. Here’s the link with all of them.

They are quite an alphabet soup of measures, for example, eliminating working with local law enforcement to pick up criminal illegal aliens.

Thanks for that link, Karen.

The president is a criminal. He makes Nixon look like a clumsy choir boy. His administration is going to enact amnesty no matter what anybody does — courts, congress or anybody.

And it’s looking like, once again, the Republicans will score an assist.

This is a game the Left is very comfortable playing. They will do very well.

Ah, as if there were journalists who didn’t have to tout the liberal line just to get their paychecks.

O has no intention of following the law no matter what the final adjudication.

Re: What is the EMERGENCY?

Apparently the Administration is playing beat the clock with the grapevine, south of the border.

If word gets out that the amnesty is invalid/illegal, the flood of illegal immigrants will slow/stop — and, ultimately, threaten the swelling of the illegal democratic voter rolls.

The EMERGENCY is the momentum to keep all those bodies in motion to cross our borders, to ‘fundamentally transform’ the USA.

There were three Barracula memos that day, and there they are.

The Ides of March are coming. So who knows? (I expect Netanyahu to deliver a blow come his speech to the Joint Session of Congress in March.) And, it’s too bad that the GOPe has McConnell unable to deal with Reid. (I’d even bet the senators will vote for Amnesty.)

McConnell is looking tto pass a separate bill, but one dealing only with second virtual amnesty, not the first one (for “Dreamers” with an age cutoff) which was done in 2012. The House wanted to reverse both. With that, he is hoping to detach this from Homeland Security funding.

If the Democrats wqere not so afraid to stand on something, they would let the Homeland Security bill pass, have President Obama veto it, have an attempt to override it fail, and then get on to business.

They laughed at me and made jokes but I proved beyond the shadow of a doubt and with… GEOMETRIC LOGIC… that a duplicate key to the wardroom icebox… DID exist!

We were told by the newspapers that they could have gone directly to the Court of Appeals.

Rules are for little people and those whose agendas aren’t “progressive.”