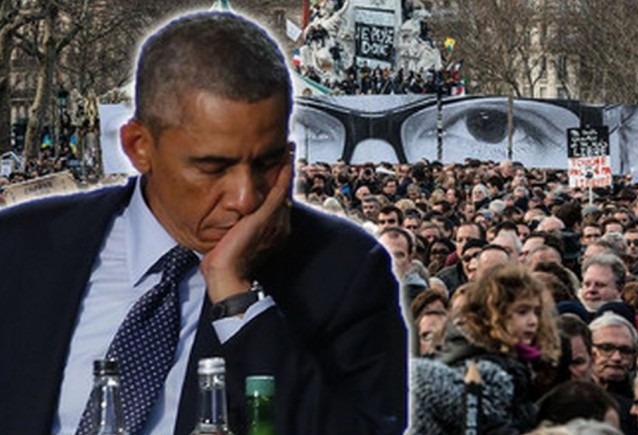 In his latest editorial, Leslie Gelb seems both frightened and clueless about Obama.

Gelb is a liberal whose foreign policy credentials are impressive if you like this sort of thing. At the age of 77, his resume includes “former correspondent for The New York Times and …currently President Emeritus and Board Senior Fellow at the Council on Foreign Relations,” assistant to Jacob Javits, Carter’s Assistant Secretary of State, and plenty more that would warm the cockles of most Democrats’ hearts.

But Gelb writes as though he were Rip Van Winkle just waking up from a long and very deep sleep, one that lasted from January of 2009 till now and encompassed Obama’s entire presidency thusfar.

How else can you explain this sort of thing?

The failure of Obama or Biden to show up in Paris made clear that most of the president’s team can’t be trusted to conduct U.S national security policy and must be replaced—at once.

Republicans have been thinking that for a long long time—welcome to our world, Gelb. But we’re not delusional enough to think it could ever happen. The people Obama has placed there are exactly the people he wants. They do his bidding, and he has no sense that he’s failed.

[Obama’s failure to attend the Paris march] demonstrated beyond argument that the Obama team lacks the basic instincts and judgment necessary to conduct U.S. national security policy in the next two years. It’s simply too dangerous to let Mr. Obama continue as is—with his current team and his way of making decisions. America, its allies, and friends could be heading into one of the most dangerous periods since the height of the Cold War.

I’m a bit puzzled as to why this particular inaction of Obama’s has riled Gelb so much; after all, I could list hundreds more things Obama has done that seem a great deal worse to me. Perhaps Gelb is incensed at this because he’s old enough to remember when all presidents, Democrat or Republican, knew what was necessary diplomatically on the world stage, even though they might have disagreed with each other on some of the details. And Gelb remembers a world when, for the most part, people actually recognized when things weren’t going well, admitted that they needed a change of personnel, and wanted aides under them who knew their stuff.

On the contrary, Obama wants people who don’t know their stuff in terms of world events, yes-men and yes-women who will not challenge him.

And Gelb cannot possibly be serious here, if he knows anything about Obama at all:

Mr. Obama will have to excuse most of his inner core, especially in the White House. He will have to replace them with strong and strategic people of proven foreign policy experience. He’ll also need to seed the Defense and State Departments with new top people serving directly as senior advisers to the secretaries. And he also will need to set up regular consultations—not the usual phony ones—with the two key Senate leaders in this field, Foreign Relations Committee Chairman Bob Corker and Armed Services Committee Chairman John McCain, two people who can really improve his decisions and bolster his credibility. Many will be tempted to dismiss these crash solutions as several bridges too far, as simply unrealistic. But hear me out. It can be made much more plausible than it seems at first blush. What’s more, if Mr. Obama doesn’t do something along the lines of what’s proposed here, he and we are in for unmanageable trouble.

Before I continue, I have to tell you that I’ve never made such extreme and far-reaching proposals in all my years in this business. I’ve never proposed such a drastic overhaul. But if you think hard about how Mr. Obama and his team handled this weekend in Paris, I think you’ll see I’m not enjoying a foreign policy neurological breakdown.

Gelb goes on to blame Obama’s staff for Obama’s non-attendance at the march (“oh, if only Stalin knew!”). Then he suggests the following:

First, Mr. Obama will have to thank his senior National Security Council team and replace them. The must-gos include National Security Adviser Susan Rice, Chief of Staff Denis McDonough, chief speech writer/adviser Ben Rhodes, and foreign policy guru without portfolio Valerie Jarrett. They can all be replaced right away, and their successors won’t require senatorial confirmation.

Obama fire Jarrett? Delusional, risible. Obama would be more likely to cut off his own right arm.

Bolton. He has Barracula nailed.

We are in danger under this poor, pathological Collectivist man-child.

Jarret is his surrogate mommy, and he’ll NEVER desert her.

Remember the “Dude” who went from political fixer hack to national security position? Symptomatic of the Stalinesque appointment of people with zero credentials in this administration.
As to “why this particular inaction of Obama’s has riled Gelb” I wonder about that too, the only explanation perhaps is that this is the first time when accredited liberal voices have been raised in criticism. The rationale for these liberal criticisms is that these are the people who want the US to be more like Europe, so it is a natural for them to want us to join in on European movements whether this is social welfare, multi-culturalism or marching in the streets.

Mind you, Stalin at least strove for efficiency and effectiveness (sarcasm on).

He is one of the Chosen Few, but the MSM is clamped mum on his heretical suggestions about the inner staff of Great Leader. There must be some splendid inner contortions going on amongst the Democrats, knowing that Comrade Gelb is actually on to something, but desperate to prevent public awareness of the snafu.

Sounds like the Murray Gell-Man effect in action. (see http://www.firstthings.com/blogs/firstthoughts/2011/08/media-credibility-and-the-murray-gell-mann-amnesia-effect)

Obama recently spoke at the UN saying that the U.S “will work with a broad coalition to dismantle this network of death.” He lied. Again.

The “broad coalition” met in Paris for the first time and Obama was a no-show. Val, the ringmaster of the Obama circus, denigrated the “broad coalition” by calling the demonstrably unifying response a “parade.” Val was born in Iran and not in Egypt.

We have entered WWIII. Radicalized Islam is the enemy-the epitome of the west’s moral and spiritual decline. This kamikaze mission of a religion coupled with regional and cultural based economic poverty and, of course, the spirit of antichrist are the enemies we face at home and abroad.

Europe, again, will be the main battleground because of its ‘matured’ agnostic philosophies, its nihilism, and its free-floating moral ambiguity called “social justice,” “multiculturalism” and “political correctness.”

And, Obama can’t defend American values, whether at the UN or to his staff because he has no clue as to what they are.

“Agnostic” is not the right word here. I think you meant to say “atheistic.”

Agnostic as in the ‘god’ are out there and do not intervene.
Atheistic and gnostic religious teachings should be included.
Also, the quest for the epicurean based Freudian “Pleasure Principle” utopia in lieu of pain and conflict.

Obama should fire most of his staff, but I’m sure there were at least a couple of them who said it would be a bad idea to not go to Paris. It was Obama’s decision alone to not go. The event was such that he wouldn’t be the feature performer and that doesn’t sit well with him. Also, there was no fund raising to be done there, so why would he waste his time.

Oops. I forgot to add, and Obama’s a Muslim.

Many liberals who criticized Obama heretofore paid a price, a big price in many cases. As his administration goes on, more and more evidence of ineptitude emerges, and a few more libs mouth off. However, Obama & Company can’t punish everybody, so libs – I hope – are getting braver about public criticisms of Obama. A liberal camp of anti-Obamans is forming. This is awesome news. Uber -liberal Al Sharpton has uber-liberal Hollywood fixed in his sights over Oscar noms. Around here, Rags and I and others have long predicted they would at some point begin to eat each other, because that’s how their Alinsky-ite, us/them, divisive, socio-fascist politics always ends up – eating their own. They run out of ‘game’ and start eating each another.

Gelb suffers from the delusion that Obama is actually in charge of this administration. When he finally grasps the concept that Obama is nothing more than the wizard on the screen he can begin to understand the mortal danger we are in.

If only Gelb knew — who Obama is.

If only Obama knew — who Obama is.

This hearkens back to the response by the useful idiots in the Soviet Union, “if only Stalin knew.” The fact is that personnel is policy, and Stalin didn’t need to be told what his faithful minions were doing. In fact the mess, horrors, bloodshed and destruction were a purposeful byproduct of the deliberate rush to implement the agenda.

Welcome to the party pal