In the long run, Israel will outlast the Mullah-regime. It just has to hang on long enough.

David Goldman, aka Spengler, has written extensively about demography.

In 2011 we highlighted his argument that Israel is an emerging demographic superpower:

Like the vanishing point in a perspective painting, long-term projections help us order our perceptions of what we see in front of us today. Here’s one to think about, fresh from the just-released update of the United Nations’ population forecasts: At constant fertility, Israel will have more young people by the end of this century than either Turkey or Iran, and more than German, Italy or Spain. 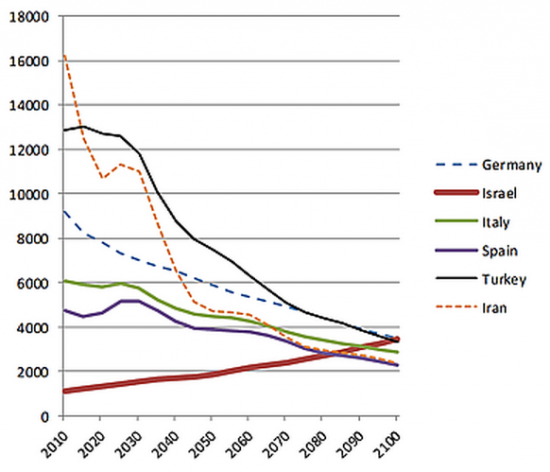 In the 5th Century BC, the “Persian disease” noted by Hippocrates probably was bubonic plague; in 8th-century Japan, it meant the measles. Today it well might mean chlamydia. Standout levels of infertility among Iranian couples, a major cause of the country’s falling birth rate, coincide with epidemic levels of sexually transmitted disease. Both reflect deep-seated social pathologies. Iran has become a country radically different from the vision of its theocratic rulers, with prevailing social pathologies quite at odds with the self-image of radical Islam.

Iran’s fertility decline from about seven children per female in 1979 to just 1.6 in 2012 remains a conundrum to demographers. Never before in recorded history has the birth rate of a big country fallen so fast and so far. 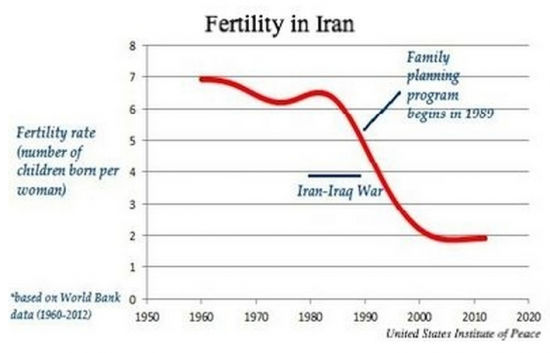 The infertility rate in Iran is particularly shocking:

Iran has the highest incidence of lifetime infertility of any country in the world, estimated at between 22% and 25% in separate Iranian government surveys. Roughly a quarter of Iranian couples, that is, are unable to bear children.

By comparison, lifetime infertility ranges from 11% in Europe and 15% in India. The Iranian data are more extensive than in most other countries because Iran’s government has devoted enormous resources to finding explanations and remedies for its uniquely high infertility rate.

One explanation for Iran’s strikingly infertility rate is the high level of consanguineous (cousin) marriages, that is, inbreeding….

A more probable cause of Iran’s extremely high rate of infertility is sexually transmitted disease, particularly chlamydia, the most common bacterial STD and one likely to go undetected in countries with poor public health systems. This may seem incongruous, for the Islamic Republic of Iran represents itself as the guardian of social standards against Western decadence. Nonetheless, the government’s own data strongly support this inference.

This will not end well, and may explain in part Iran’s aggressive behavior and quest for a nuke, as it is doomed demographically:

We know how this will end: Iran’s economy will be crushed under an avalanche of elderly dependents a generation from now. What we do not know is what will happen en route to the end. The sad task of Iran’s neighbors is to manage its inevitable decline and prevent its own sense of national tragedy from turning into tragedies for other peoples as well. Iran’s position is without precedent among the nations of the world. It knows as a matter of arithmetic that it has no future. Its leadership feels that it has nothing to lose in strategic adventures, which means that the rest of the world should take no chances with Iran.

Of course, this decline will take place over decades. Which is little comfort to Israel.

In the long run, Israel will outlast the Mullah-regime. It just has to hang on long enough.

The next two years of that long-enough may be the toughest.  (See what I did there?)

Americans should take note, their chosen profits: wealth, pleasure, and leisure; and their planned parenthood rites; do not favor their Posterity. We have a numerical advantage, but our Posterity is not keeping pace. Make room for aliens who may or may not share your political, economic, religious (i.e. moral), and social standards.

Of all industrialized nations – on the US and Israel had positive replacement birth rates.

Now – after Obama’s great recession – the US has gone negative.

Who knew that goats could pass on STD’s ….

As for Israel’s birthrate, how much of it is Jewish, how much Muslim, how much Christian, and how much Druze?

The very conservative Jews have a higher birth rate than the other groups you mentioned. Securlar Jews do not meet replacement levels.

Note – In 30 years Israel will have more military aged men than Germany.

It depends how you define “secular” Jews. Most Jews in Israel define themselves as traditional, which I guess would most closely be defined as non practicing Orthodox Judaism. For example, when they go to synagogue it will be an Orthodox one although they dont usually go and are not Sabbath observant. Most keep kosher as its very easy to do so in Israel.

Among that population, they are an anomoly in the western world that they have about 3 kids per family which is almost double Europe

Orthodox Jews tend to have high birthrates, even among those who delay marriage into their late 20s.

wait til the radiation-caused freaks emerge

The arabs are a small percentage of Israel’s population.

What’s big news is how varied the ethnicities. About 3-million came from Russia. You also have Sephardic Jews. Some from Spain. Some from Iran.

Also, the iranians elected to attack the American Embassy, in tehran, back in 1979. When Jimmy Carter was president. It’s hard to imagine, but one million of these muslims raced in to destroy the embassy. (ARGO is a minute portion of this story.)

DC’s population is probably more antisemitic than anything you’d find in germany or france.

While europeans now see (and fear) their own muslim populations. How do they cope? They turn a blind eye. And, they don’t even report on how easy it is to barbecue a car in paris.

You know, there’s good news. It keeps the Israelis on their toes.

Can we smile about this without getting a fatwa? I need to know before I accidentally do something reckless.

80% of my circle of friends are Orthodox, university educated with multiple kids. I myself have a masters from the top school in Israel have 2 kids and have yet to hit 30. Europe is screwed long term because they never had enough kids for “replacement level productivity”, relaxed immigration standards and ended up flooded with a decidedly illiberal population that refuses to accept Western values.

I’m late to the party here.
If problem with Oran’s declining birth rate is infertility and STDs, then improvement in health care and hygiene can possibly make a dent.
I’m interested to know how demography differs between Iranian ethnic groups because Iran is diverse.