“The West must stand up for freedom.” 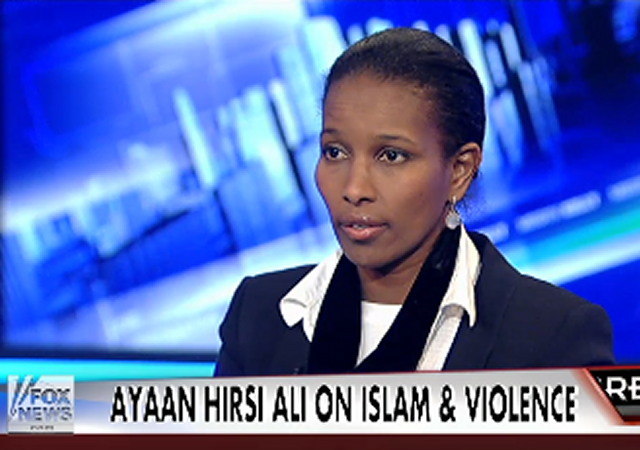 The terror attack on Charlie Hebdo this week was a stark reminder that Europe and the rest of western civilization has a serious problem. As people seek explanations for how this happened and what should be done about it, one voice speaks bravely and deserves attention.

Ayaan Hirsi Ali, the writer and activist who has drawn the ire of many in the Muslim community as well as American feminists for her defense of women, has written an op-ed for the Wall Street Journal in which she addressed the attack:

How to Answer the Paris Terror Attack

After the horrific massacre Wednesday at the French weekly satirical magazine Charlie Hebdo, perhaps the West will finally put away its legion of useless tropes trying to deny the relationship between violence and radical Islam.

This was not an attack by a mentally deranged, lone-wolf gunman. This was not an “un-Islamic” attack by a bunch of thugs—the perpetrators could be heard shouting that they were avenging the Prophet Muhammad. Nor was it spontaneous. It was planned to inflict maximum damage, during a staff meeting, with automatic weapons and a getaway plan. It was designed to sow terror, and in that it has worked.

The West is duly terrified. But it should not be surprised.

If there is a lesson to be drawn from such a grisly episode, it is that what we believe about Islam truly doesn’t matter. This type of violence, jihad, is what they, the Islamists, believe.

There are numerous calls to violent jihad in the Quran. But the Quran is hardly alone. In too much of Islam, jihad is a thoroughly modern concept. The 20th-century jihad “bible,” and an animating work for many Islamist groups today, is “The Quranic Concept of War,” a book written in the mid-1970s by Pakistani Gen. S.K. Malik. He argues that because God, Allah, himself authored every word of the Quran, the rules of war contained in the Quran are of a higher caliber than the rules developed by mere mortals.

Ms. Ali appeared on Megyn Kelly’s show this week after the attacks.

The talisman of this age is the hashtag, where you can vacantly, self-righteously associate with a cause d’ jour today and never think about it tomorrow.

But there is a part of our population…including that of the broader West…that will be more inclined to learn from and live by the words of Churchill….

“The era of procrastination, of half-measures, of soothing and baffling expedients, of delays, is coming to its close. In its place we are entering a period of consequences.”

We have always known how to deal with Islamists, just as we knew the hard math of how you dealt with Imperial Japanese on Okinawa. You kill them. That is ALL you can do with them, because they have made choices and embraced death. If they change their minds, fine. But that has to be made very clear, and until that happens, you simply kill them because there is no viable choice, as they are committed to killing you and subjugating those you love.

More Churchill: “An appeaser is one who feeds the crocodile hoping it will eat him last.”

Come on Henry, crocodiles are not Muslim, or if they are they are moderate Muslims.

Crocodiles eat pork, so no, not Muslim I’m thinking. But they only kill for food so, yes to crocs being moderates. Ironically, ancient Egyptians worshipped Sobek, the crocodile god, but I think most earthly, present-day crocodiles are Methodists.

Methodist or cowboy boots or briefcases.

Yeah Rags, I have this sick feeling in my stomach that future generations will look back on our “leaders” with derision like we do at Neville Chamberlain.

Can someone name a time, just one, in the history of man, when appeasement of an aggressor resulted in lasting peace while maintaining the liberty of the appeaser?

I can’t make up my mind if I believe that Obama is just another weak-kneed liberal whose mind has been poisoned with progressive claptrap, of if he is willfully working to destabilize the world in order to allow the spread of this poison known as Islam.

All of these statements about “religion of peace” and “ISIS is not Islamic” are flat and simply untrue. Anyone who says stuff like this is either ignorant of the Koran or is a bald faced liar.

The teachings of their book are very clear. The resolve of these guys is very clear. Now what are we, as a society, going to do about it?

“Can someone name a time, just one, in the history of man, when appeasement of an aggressor resulted in lasting peace while maintaining the liberty of the appeaser?”

1981-1982. Appeaser: me. Aggressor: Ex-wife. Liberty was maintained only through quick feet and great skill for bullshit. I danced and kept it going, barely, for almost a year. That’s a long time ago. I know. I’ve been searching for her killer ever since, but nobody will do it.

Agreed. “Tweeting” slogans and expressions of solidarity about freedom of speech and adopting “Je Suis Charlie” as a fashion statement are worthless acts of grandstanding at this point. Mark Steyn was visibly angry about this, pointing out that the people expressing solidarity with the murdered cartoonists at Charlie Hebdo — especially prominent, “play-it-safe” media twits such as John Stewart and Stephen Colbert — only speak out now, when it’s safer to do so behind a communal mass of shared outrage. Their solidarity was nowhere to be seen when such solidarity might have actually meant something, i.e., when the cartoonists were alive and bravely standing up to Islamic intimidation tactics and thuggery.

Because the attackers themselves said that the attack on Charlie Hebdo magazine was revenge for its cartoons about Mohammed, I think it is essential for our media to publish these cartoons in context.

Right now, Boko Haram has just leveled a village, killing 2,000 people in the name of Islam.

Right now, the Saudi government continues to publish textbooks that characterize people of other religions as “apes and pigs,” and teaches children that they have the right to impose Islam by force on others, despite the clear teaching in Islam that religion is not to be coerced.

Right now, “ISIS” is using video of the actual murder of human beings as part of their recruiting to their “caliphate” which is intended as a vehicle for Islam to take over the world.

We need a direct, visual comparison between the content of the cartoons, and the actions the cartoons are protesting.

Never forget that words in Islam do not have their plain meaning. Subjecting infidels to debasement and violence is does not constitute compulsion. They are free to convert to Islam at any time.

The same goes when some lying Muslim claims that Islam forbids killing innocent people, without also mentioning that by Islamic definition non-Muslims are never innocent since they commit the greatest of sins, knowingly rejecting Allah and Muhammad.

Valerie makes an important point. Please read this comment from someone at a pjmedia Spengler article:

“We have all been conned. You see, the big news is not what has been happening in France the past couple days. No, the news of consequence occurred in Nigeria on the same day as the Charlie shootings. It will be ignored because it does not fit the narrative.

On Wednesday, a Muslim army attacked a group of small towns and villages. Two thousand (2,000) people are reported dead, with hundreds more dragged off into slavery. Why is this being ignored by MSM?

You see, in the case of Charlie, talking heads will be busy for weeks debating whether the cartoonists’ provocative actions lead to righteous indignation among Muslims, which erupted furiously. When done, obfuscation will be the order of the day. As for the kosher market killings, well, if Jews were not wantonly killing Palestinians and occupying Palestinian land it would not have happened. Again, relativity will prevail – six of one is a half-dozen of another. There will be no really bad persons and Islam will remain “the religion of peace.”

But, in Nigeria, the helpless victims of Islam had done nothing to provoke violence other than simply being non-Muslim. These villagers were not in the business of printing cartoons unflattering to the prophet and they were not staunch defenders of the hated Zionists. Nope, they just were not Muslim and that was enough to bring down the wrath of god. Muslims behaved as Muslims do when no one is watching.

Oh, the Nigerians are not white or Western, which means they are uninteresting. Their fate has no relevance to the West. What happens on the “dark continent” stays on the dark continent. As an aside, Boko Haram (Western education is forbidden) is officially named, Jama’atu Ahlis Sunna Lidda’Awati Wal-Jihad (People Committed to the Prophet’s Teachings for Propagation and Jihad). As I said, there is nothing to see here.

There will be no great debates about “fundamental”, “radical”, or “faux” Islam when it comes to the dead in Nigeria and their killers. Dead in their thousands, they will make hardly a blip on the radar screen during any news cycle. Herds of news people will not trample the grass of Nigeria looking for great scoops and endlessly debating cause and effect and defending the benign nature of Islam. Because of this, you see, the actual murderous nature of Islam will remain hidden from view. That is the story.”

Seems to me they had inside information. Someone somewhere associated somehow with Charlie had it in for them.

They had definitely cased the place and knew the police were a hollow force that would easily be taken.

They also had a plan B. They didn’t wind up at a Jewish Deli by accident.

And if they’re not Islam then any actions taken against these type of people isn’t anti-Islam now is it?

Their planning was limited, as the denouement shows, I suspect the kosher grocery was just a target of opportunity, But yes I think they had the info about when the staff meetings were.

As long as our “leaders” despise us bitter-clinger taxpayers more than murderous hordes of rag heads, the problem will only get worse.