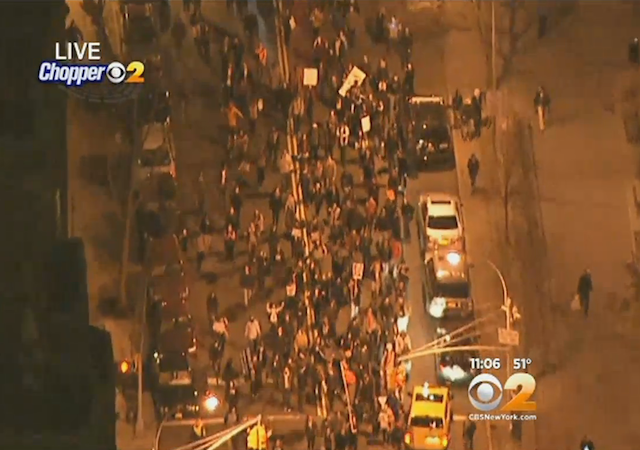 The violence that gripped Ferguson, MO in the wake of the grand jury’s decision not to indict Darren Wilson has spread to multiple cities across the US.

VIDEO: Woman struck by car at a #Ferguson protest rally in Minneapolis. http://t.co/uGj2H0IQ9U

RT @TheAnonMessage STAND OFF: Protesters in Los Angeles lie down on the street. #ShutItDown #Ferguson pic.twitter.com/Wz3q34AHgl

Meanwhile in Ferguson, things are quieter, but still tense:

West Florissant Avenue, a Ferguson commercial strip now being treated as a crime scene after an arson spree, was still barricaded by the police on Wednesday. National Guard troops in camouflage uniforms, who were largely limited to protecting government buildings two nights earlier, fanned out across the city, taking up positions along street corners and at intersections.

Throughout demonstrations on Tuesday night, the Guard responded to disturbances, turning back demonstrators from a drugstore that had been surrounded by the police and helping officers make arrests outside the Police Department. Although windows at Ferguson’s City Hall were shattered and a police car was flipped and burned, law enforcement officials said the more assertive response had helped curb the chaos that prevailed on Monday.

Before and after photos show extent of damage #Ferguson http://t.co/ekSUAXbL0v

Not fun for anybody: [email protected]: #Snow in #Ferguson. National Guard at PD. Protestors dwindling 2 about 15 pple pic.twitter.com/Pm1yJ2MClh

And the #Ferguson hashtag feed.

Maybe – maybe – the locals and relatives could be expected to be upset, even angry, at least until the facts were known.

The facts are known now. WHAT are these Bozos protesting? The ‘right’ of criminals to attack police without consequence?

There seems to be a typo in your subhead.
National Guard moves in as riots spread

There we go, fixed it for ya.

I would have done the same thing in the car that ran over the woman.

I honestly do feel bad for her for what happened to her but those people started banging on the car and trying to smash it and get at the driver before she was even in front of the car. Her ignorance of that kind of heated situation contributed to her injury.

“The men wanted to acquire two more bombs, the sources said, but could not afford to do it until one suspect’s girlfriend’s Electronic Benefit Transfer card was replenished.”

That is at turns pathetic and appalling. At least our enemies are morons…

Something that never really struck me until today…

Eric HOlder and Barracula have known for months that Wilson was not the craven racist killer the first accounts had him being.

They could have…should have…knocked down the more lurid stories, but they kept them alive. Right up until Monday.

That is almost unspeakably evil.

Yeah, I noticed that a lot of the African-American witnesses with exculpatory evidence opened up when the FBI came calling, unwilling to trust local or state police, and I remember the prosecutor making a really large point of saying how cooperation with the FBI had been total and the feds had everything the state had and vice-versa…

Meaning Holder knew everything or should have.

By the way, I also hear Valerie Jarrett was Obama’s liaison with Governor Nixon, in the ideal position to express the President’s displeasure and to suggest courses of non-action such as holding back the National Guard. When people said she’s doing the job she’s assigned, er, that job was to deal with activist groups like La Raza. But sitting governors? Amazing.

A FEMA camp is a terrible thing to waste.

Who came up with the catchphrase “America Held Hostage”?

Because we’re not — not all of us. In fact, it seems that it’s mainly Democrat-controlled cities which have allowed themselves (and their citizens) to be put into the position of being “held hostage”. I daresay that the majority of Americans are NOT being “held hostage”.

“America Held Hostage” sounds like typical Left/Liberal media hype from where I sit. If you are unlucky enough to live in a city where your elected representatives are allowing you to be “taken hostage”, then for goodness sake DO something about it. You are but a small minority of Americans who have elected to be victims, though. Let’s get a sense of proportion to our headlines, shall we?

I first heard the term from the Rush Limbaugh television show during the Clinton administration. If the phrase precedes that, I’m too young to know.

If anyone bothers to read the grand jury testimony they should be appalled and demand perjury charges be filed against the liars who spread rumors, inanities, and gross lies from the very beginning of this farce. And that housing project full of idiots should be torn down. Everyone there is afraid of the drug mafia holed up in it and what will happen to them if they even SPEAK to the police. “Hands up, don’t shoot” Dorian Johnson belongs in prison. Any news source that gave credence to his lies ought to have their FCC license yanked.

I’ve heard of just such a push, but the prosecutor made a point of saying no one would be prosecuted for perjury. I think he has a simple reason for that: it would call into question his releasing 4799 pages of grand jury evidence because the entire matter would not yet be closed. That and not thinking it is worth it, politically or otherwise. That’s actual legitimate discretion, not the sort Obama’s waving around. I grant you I would take pleasure in seeing Mr. Johnson called to account for his role in stirring up riots, but it is not to be.

Full vested credit in the retirement plan for 30 years of service, at Sergeant’s pay. Adjusted each year of the credited 30 so as to reflect increases in that pay or benefits over the years.

Rate calculated at full 100 % disabilty, as if a 30 year sergeant got hurt on the job. He was.

Condition: that each year, for the rest of his life, his annual rate can only stay the same or go up, it can never go down, regardless of changing contracts 20 years from now or anything else.

Condition: that at a minimum, each year from today on reflects the greater of 1)changes such as contract terms, sergeants pay, etc, that would increase his benefits, or 2)Annual COL adjustment, perhaps set at (the greater of) 3 % or actual increase.