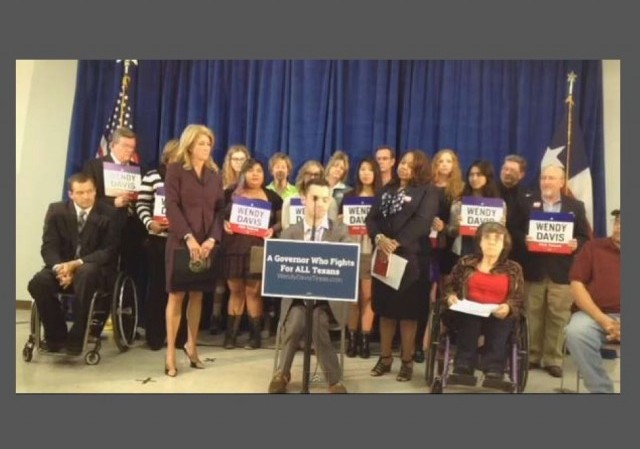 “Just keep digging” apparently being the Davis campaign mantra, Davis doubled down on the monstrous ad:

That time @WendyDavisTexas doubled down on an ad attacking @GregAbbott_TX for being in a wheel chair pic.twitter.com/vBfr0LHyQG

And then it got even worse. According to Alex Pappas at the Daily Caller, Davis held a press conference with people in wheel chairs who then proceeded to openly criticize Greg Abbott. I’d love to have been a fly on the wall listening to the campaign phone call that decided this press conference was a good idea:

During a Monday press conference featuring speakers in wheelchairs, the Texas Democratic gubernatorial candidate reiterated the attacks in her ad against her paraplegic opponent, Republican Greg Abbott, which critics have called insensitive and inflammatory.

Asked by a reporter if she is exploiting Abbott’s disability, which is the result of a 1984 accident where a tree fell on him, Davis said: “This ad is about one thing. And one thing only. It’s about Greg Abbott’s hypocrisy.”

“Greg Abbot rightly sought justice for himself when he sued a tree company and a homeowner and he received a multimillion dollar settlement in his suit,” Davis said. “And ever since, in his role as a public servant, Greg Abbott has shown time and time again that he has worked to deny that same justice to others.”

Before Davis spoke on Monday at her Fort Worth campaign office, several disabled people in wheelchairs spoke to the crowd in support of Davis, while criticizing Abbott.

Update: But it got even worse, if you can believe that. Watch this staffer awkwardly drag this man across the floor:

It’s safe to say Wendy Davis’ campaign has secured its place in the annals of “Worst Campaign Decisions in History.”

[Featured image from Will Franklin]

Davis, following the Democrat Biden protocol, “Com’m, you people, Stand up and take a bow. Do it for my campaign.”

Spread butter on her.

“Some of my best friends are disabled…”

Barbie, I mean Wendy, has obviously learned much about factual video representation from the Palestinian media.

If she keeps wearing heels that high she too will be in a wheelchair by the time she is an adult.

I have finally met a REAL cynic. Kudos.

She’ll cement her status as a prog “rock star” with this epic display of projection.

Classic… she whose sole campaign issue is “abortion, on demand, for any reason, at any time, with no shame, and FREE, FREE, FREE!” and then tells the voters it’s “for the children” clearly has no shame, and no brain.

I actually laughed out loud when I read that, as it was so unexpected. But then I actually thought about it, and realized it would be exactly what a Democrat campaign that is flailing about would do: Hire a bunch of actors to sit in wheelchairs and be campaign stunt-pieces.

Wheelchairs as props, like certain white lab coats, I recall….

Probably paid folk. It would be a riot to see Veritas find them and follow them around video taping them walking, and mount a collage! (if it they were in fact fakes).

Nothing like a “war on the wheelchair-bound” to fire up supporters.

Seriously, NOBODY is reading this copy before sticking it in front of “Mommy Dearest” Davis supporters.

She knows her base. They will lap this up.

I would check up on the identities of the people in wheelchairs. I wouldn’t expect a modern election campaign to be dumb enough to use plants this way, but it won’t do, to overestimate the brilliance of the opposition.

Also, Mr. Abbott can, and should, answer those ads. It’s so easy.

“Wendy Davis tells us that, if a person is in a wheelchair, that person is entitled to whatever they want, regardless of the request, the circumstances, or the facts involved, there is no trial required. If you think that “justice” means that you can decide in advance what’s fair, based on your prejudices instead of the facts, then by all means, you should vote for Wendy Davis. If you want a competent, accomplished governor who will think matters through and pay attention to the facts and the rule of law, vote for Greg Abbott”

What next, aborted babies as props.

They have no idea what “self parody” means.

Good-flucking-grief…!!! Lena Dumb-ham rented a baby who survived the abortion gauntlet for a Wendy Davis photo.

Call in your donations for Wendy to 1-800-Ima-Heel

One of the people had gotten out of their wheelchair and was sitting in a chair. There’s video of her staff scooting the guy in the chair across the stage. Commenter: “Why not just strap them all to furniture dollies?”
Sheesh.
http://www.thegatewaypundit.com/2014/10/this-really-happened-wendy-davis-staffer-drags-disabled-man-across-stage-at-presser-video/

Wendy Davis: Hey, I’m not insensitive. Just ask all these crip’s behind me, they’ll tell ya.

Democrats have relied on wheelchair imagery before, and on a much larger political stage:

LOL. Next she’ll be telling us that she’s not a witch.

Definitely a class act, Wendy…but why does this seem so familiar…?

That this dispictable person even has a following is telling .
I cannot wait until Nov. When this parasite is tossed out on her ear!

Somehow I recognize a familiar meanness. I think Davis is Clinton with a new body.

That’s like starting out a conversation about race with, “Look, some of my best friends are….”

When you’re in a hole, stop digging.