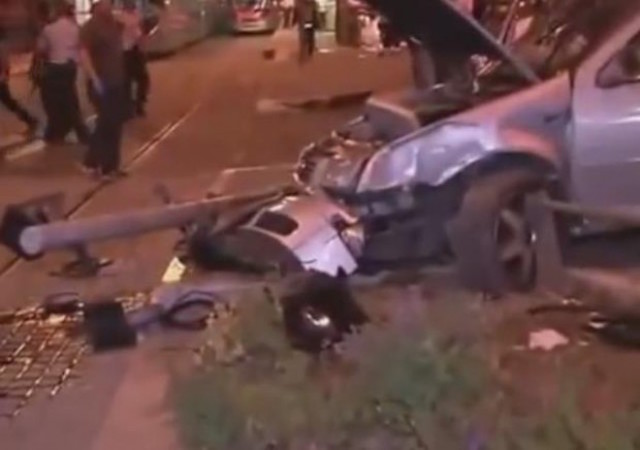 Earlier today, a Palestinian drove his car off the road into a group of people who had just gotten off Jerusalem’s light rail at the Ammunition Hill stop, killing a three month old baby and injuring seven others.

“A private car which arrived from the direction of the French Hill junction hit a number of pedestrians who were on the pavement and injured nine of them,” police spokeswoman Luba Samri said in a statement.

The baby died at the nearby Hadassah Hospital on Mount Scopus a few hours after the incident. A spokesperson for Israeli rescue service Magen David Adom said a 60-year-old woman and seven other people, including the baby’s father, were also lightly and moderately wounded in the attack. …

The suspect , Abdelrahman al-Shaludi, previously served time in jail and has been identified by Israeli government spokesman Ofir Gendelman as a member of Hamas.

The slain baby’s grandfather, Shimon Halperin, told reporters Wednesday evening that her parents had waited many years for a child, and they were completely shaken. “The doctors did everything they could and I want to thank them,” he said.

Channel 2 confirms that the perpetrator of today's attack in Jerusalem is the nephew of Hamas's late chief bombmaker, Mohiyedine Sharif.

those who blamed Arab boy's murder in Jerusalem on Bibi's call for revenge against terrorists-will they now blame Abbas "cattle" incitement?

I’d like to ask the rest of the world a question.

So, just how is Israel wrong to try to keep these murderous pukes off their streets and out of their communities?

Each day I come to realize more and more that Orwell was right. He was just 30 years off on his timing.