New Hampshire Democrat admits she votes with Obama 99% of the time. 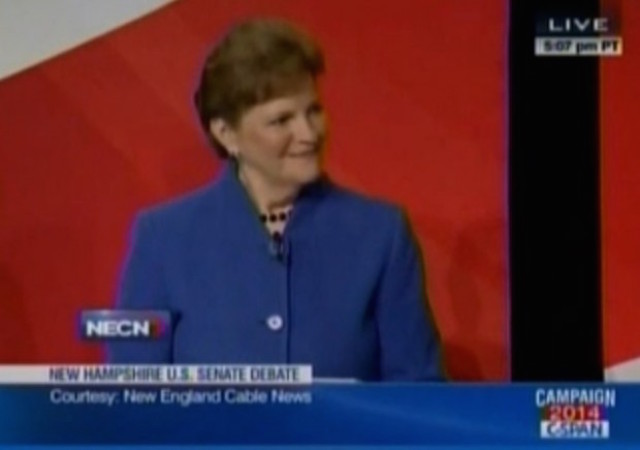 If you missed the debate between Scott Brown and Jeanne Shaheen in New Hampshire last night, consider yourself lucky.

Brown did very well despite the tremendous odds stacked against him. The debate was sponsored in part by the University of New Hampshire and moderated by the not-at-all biased Chuck Todd of NBC News.

Scott Brown went out of his way to tie Shaheen to Obama’s poor record and at one point, she helped him out.

While many Democrats are running as fast as they can from Obama, Jeanne Shaheen admitted that she has voted with Obama 99% of the time.

Jeanne Shaheen Admits To Voting WIth Obama 99% Of Time

Senator Jeanne Shaheen (D., NH) admitted Tuesday night that she has voted with President Barack Obama 99% of the time.

At her second debate against Republican senate candidate Scott Brown, Shaheen conceded the fact after being pressed by a debate moderator.

After reminding Shaheen of her voting record the moderator questioned Shaheen, “How does your voting record sort of jive with serving the citizens of New Hampshire?”

Faced with the facts, Shaheen admitted to the number and tried to pivot. “Scott Brown talks a lot about one survey and 99% of the time I voted with the president,” Shaheen replied, “but the numbers I’m proudest of are the 259 people now working at the Berlin prison because I was able to get the prison open after it sat empty for two years.”

Most polls show Brown and Shaheen in a dead heat.

Real Clear Politics has Brown trailing Shaheen by only 2.6 points.

That’s pretty good considering neither Democrats nor Republicans expected this race to be so competitive.

Whether or not Scott Brown can pull this off remains to be seen but if he does, expect an early election night in two weeks.

Will the https://freestateproject.org/ vote for Brown?

She may be wrong 99% of the time, but at least she’s consistent. They do have a few true believers.