It’s time to choose the best political ad of the cycle!

It’s time to choose the best political ad of the cycle!

Who will come out on top? 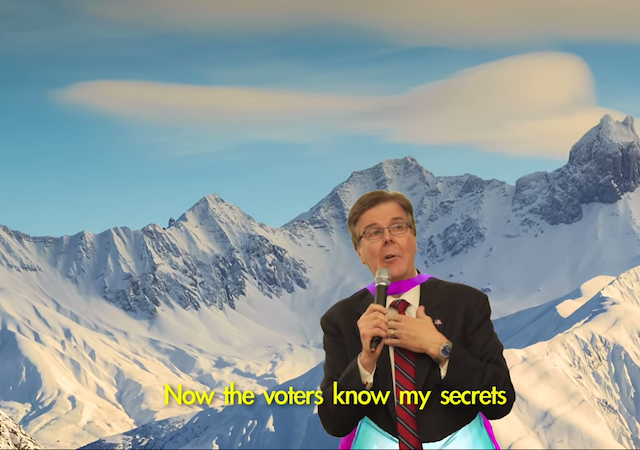 The election cycle, that is. It’s been a bizarre one, and I think we’re all about ready for a little peace and quiet from our phones, front doors, and inboxes.

But before we put the ads, e-mails, and stump speeches behind us (we still have a few days to go, after all,) we’d like to take a look back at the best (or worst? we can’t really decide) ads of the election cycle.

Our nomination comes to you out of the great state of Texas, courtesy of the David Dewhurst for Lieutenant Governor Campaign:

Whatever else happened in this election cycle, at least we got this. http://t.co/mIrcMcC1kT

Have your own nomination? Post to the comments along with a little bit of background, and we’ll announce the final winner on Monday.

I have to go with the early ad from the future senator of the great State of Iowa:

Yes, let’s rewatch some political ads. Afterwards maybe I’ll reminisce on that colonoscopy I got last spring, or that root canal back in August.

You mean they are supposed to be SEPARATE procedures…?!?!

For most of us, they are.

The Neel Kashkari (Republican for CA governor) drowning kid video was a good message but kind of odd:

Is there any competition? The “make-em squeal” ad.

The obvious winner is any Wendy Davis ad. Any Democrat who runs a campaign so badly that the Texas media (normally as lefty as MSNBC) goes dark for the last few weeks needs to be encouraged.

I got a flash for you — the Dewhurst campaign told the truth, this was true about Dan Patrick. He will prob. end up our Lt Gov with an eye on the Gov office. He is a crook, a crony politician., I voted for any one but Patrick or Dewhurst.

I liked Marilinda Gracia’s pitch to millennials, the future of any political party.

She is in a neck and neck race in NH.

Whatever the stupid of the campaign commercial producers, they cannot top the press.

Lizz Winstead of “Lady-Parts Justice” is scary looking. I cringe when I think what her “lady-parts” must look like!

The Tom Corbett ads are winners. He is running for reelection as Governor of Pennsylvania against a tax and spend multi millionaire Democrat. We get a kick out of these ads, even though we are in New Jersey.

This is the best one:

And this is a timely runner up with a Halloween theme.
Tag line: “….higher taxes are so scary, they even scare people who scare people for a living.”

My comment from the other day seems to have been deleted – I agreed with @Viator that “Squeal” is my fave. Any idea what happened to it?

So, here is my comment (or what I remember of it):

I also nominate “Spelling Bee NH” – https://www.youtube.com/watch?v=VeASvCUOuMI “How do you spell ‘Shaheen”?
O B A M A

It is an American Crossroads (Rove) ad, so I hesitate……