Spencer is believed to have been treating Ebola patients in Guinea. 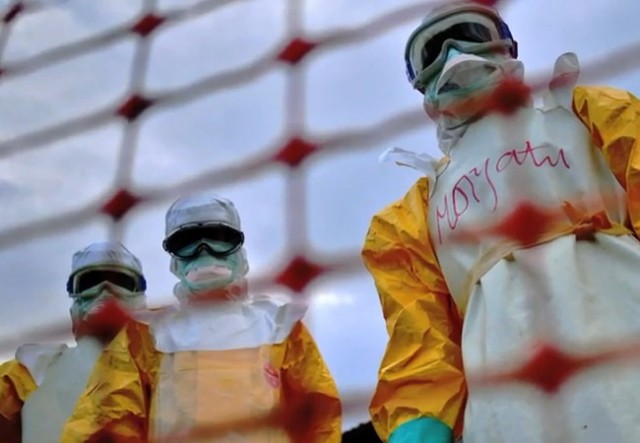 The New York Times and CBS have both confirmed that Dr. Craig Spencer has tested positive for Ebola:

“Today, EMS HAZ TAC Units transferred to Bellevue Hospital a patient who presented a fever and gastrointestinal symptoms,” New York City officials said in a statement. “The patient is a health care worker who returned to the U.S. within the past 21 days from one of the three countries currently facing the outbreak of this virus.”

Spencer, who is a physician in his 30s and works with Doctors Without Borders, came back a week ago from Guinea, where he is believed to have been treating Ebola patients.

Mayor de Blasio and Gov. Cuomo are scheduled to hold a news conference from Bellevue Hospital at approximately 9 p.m. (Embedded below the fold.)

“We can’t say that this is an unexpected circumstance…we are as ready as one could be for this circumstance,” said New York Governor Andrew Cuomo in a press conference late Thursday night.

New York political and health officials emphasized what we’ve heard before: that Ebola is difficult to contract, and that there is no need for panic. They divulged more information about Dr. Spencer, who apparently was not symptomatic until this morning at around 10 am, at which time he called the proper authorities and was transported to Bellevue Hospital.

Residents have been spotted clearing out of Spencer’s apartment building:

The media appears to have left any semblance of denial at home:

This ought to help President Obama’s party in the mid-term elections – for sure!

There is good news and bad news.

The good news is there is a simple cure for ebola.

And ironically, the most promising treatment (ZMapp) is made from . . . tobacco.

It is really to be hoped that these ‘unanticipated’ travelers arriving in the U.S. who have Ebola only do so in these 3 to 4 week intervals.

Any faster than that, or in any larger numbers and the hospitals might not be able to handle it.

I’ve read where the hospital in Dallas has only 8 patients still admitted and no word on when the ER will re-open.
How does that affect care for everyone else in the area?

What will happen to the hospital in NYC?

One small ray of sunshine though. It appears that if an infection is caught early enough that, with the best treatment the U.S. medical system can provide, a patient has an excellent chance of recovery.

I can’t help wondering why they don’t do precautionary PCR test for Ebola on doctors who return from treating Ebola patients in the hot zone. It’s not a large number of people, and it would be a lot cheaper than getting special bio-isolated transportation to Bellvue.

I believe the PCR test may return a false negative if you have low level of virus in your blood — and since the current guess is that the virus is contagious at somewhere between one and ten copies of the virus being transferred, the level of virus in someone recently infected with Ebola can be very low indeed.

On the other hand, PCR tests would work together with quarantine, double-checking that individuals being released aren’t infected but asymptomatic for whatever reason. After (21? 25? 42?) days, the virus should be detectable or entirely beaten off by your immune system.

Thanks! I wasn’t clear about the science around the issue.

Just curious, how many copies of the virus could be contained in a single cell?

I don’t know about a single cell, and it might depend on what type of cells — Ebola is unusual among viruses in that it attacks all sorts of cells. But one of the factoids I read is that when dying an Ebola patient can have up to a billion Ebola viruses in a cubic centimeter of blood.

The NYC media freaks out about everything. They’re already freaking about this one. Even though they say “stay calm” they look freaked out.

CDC: “Sure! C’mon in! No particular protocols!”

Yes, can we arrange to have his medical license pulled? What a moron.

“According to reports, the doctor not only did not self-quarantine after returning to the US from the Ebola zone, he mixed and mingled and partied in a way that could have endangered a whole lot of other people.”

Forget CDC protocols, shouldn’t a doc with experience working with Ebola know to self-quarantine? How come every time there is a pinkeye in our pre-school I get a stern letter from the director, but medical professionals working with highly contagiose deadly disease that we don’t really understand feel free to just, you know, hang out.

I do not feel sympathy for this dumba$$ doctor but I do sympathize with those around him. If he survives and practices medicine someday, I hope everyone he cares for knows exactly how stupid he truly is. No doubt he voted for Obama twice or more. As Bugs would say: What a maroon!

But this is why we have PUBLIC HEALTH OFFICERS.

Apparently, we’ve forgotten how to use the tools we knew of hundreds of years ago.

The Great LONDON Plague never got to be the Great ENGLISH Plague because they isolated London.

People have to BE quarantined…not asked to quarantine themselves.

Yes! One of the things we’re learning is that medical personnel can’t be trusted to self-isolate. If doctors and nurses who know they’ve been exposed can’t be trusted to minimize their contact with the rest of the world, neither can anyone else. We need *at minimum* quarantines-at-home enforced by threat of being confined to a medical quarantine ward with a locked door, followed by an immediate transfer to prison when the quarantine is complete. I’d rather have ankle bracelets.

So one doc breaks quarantine for a bowl of soup and another to go bowling…. Does Ebola evoke “bowl” in the sub conscientiousness ?

Well, don’t forget our own (sigh) Sheila Jackson-Lee refers to the disease as “E-bowler”. Maybe it effects the brain…

It’s also being reported that in recent days he has used subways, taxis, and Uber for transportation.

The idea that you aren’t contagious until symptomatic is about to be tested.

Well, this doc had a fever of 103 when he went in, so was past the 100.4 maximum, so was at the early stages of symptomatic, but still probably within the margin of error for that standard.

But we already have three tests of “not contagious till symptomatic”, in the U.S., with Duncan and the nurses. And Duncan was also (probably) past the 100.4, maybe for a couple days, before he went to the hospital the second time. So U.S. testing has shown no infection, even when there are early symptoms, or even more severe symptoms in Duncan’s case.

I haven’t found the original testing, but I’m still assuming that standard came from real scientists, even though Obama’s political hacks were unable to implement the protocols. With such a deadly possible outcome, did “not contagious till symptomatic” really appear out of nowhere, and only now is being tested?

Conservatives should use this to show the importance of more Ellis Island like standards for immigration, but not get caught up in the hysteria. The “unwashed masses” are now paying attention, so we should remain calm and point out the dangers of open border policy, without submitting to alarmism.

That’s how I see it, at least.

He was symptomatic on Tuesday. It’s being reported he felt sluggish on Tuesday but carried on with him social life. What he would have recognized as a possible symptom in others, he wrote off as nothing in himself. We’ve used mandatory isolation and quarantine in the past precisely because of the denial exhibited by this trained medical professional.

The mayor of NY is saying that his temperature was reported wrong, and was 100.3.

Temperature or not, it is abundantly clear that American doctors and reporters cannot be trusted to self-quarantine.

It was only a matter of time…

I was just watching Fox and they showed a clip of two uniformed LEO removing rubber gloves and dumping them in a street side (public) trash can. They claimed the two had just finished inspecting the Doctor’s apartment. Hope this was a mistake, but, if it is true, then Fox is throwing gas on a smoldering fire and NYPD has some explaining to do.

And they had their hats on over the protective head cover, so it seems they were not fully covered anyway. I have doubts they were actually in the apartment, and were instead just putting up the “crime scene” tape to keep people away. But we’ll see.

He returned just this past Friday. He figured he was above quarantine. Hardly missed a place in the city where many many were exposed.

Now that NYC has an ebola case, the media will return to pretending the rest of the country doesn’t exist. Ebola! Just in time to distract people from the tsunami coming on November 4th.

You sure are putin’ on hairs up thar in Possum Hollar.

I was born in the south. (Southern California)

I GOT MY THIRTY YEAR STAMP.

So you can shoot really OLD deer…???

When you have YANK stamped on yer forehead, just understand it’s an inside joke.

A good athletic cup…word to the wise…

And keep some ice handy.

The most disconcerting issue is out leaders’ stubborn commitment to reactive responses rather than proactive responses. “Let’s wait for someone to become contagious before we take any action. Oh, and in the meantime, let’s plop them in the middle of Manhattan.” Wow, there’s a plan! Did anybody think this through?

That’s because their brains are located behind.

ISIS doesn’t need to be in NYC right now when it comes to NBCs…. the locals are doing a good job all by themselves. NYC will now be the big petri dish to test communicability but as to how many near misses … we will never know. All of this grief could have been totally avoidable with old time precautions…. that worked. Just how long we can tweak the nose of the Ebola beast with our modern technological arrogance and get away with it is up in the air.

Per advisement by a highly placed US govenment official, I say we should never waste a crisis. I think we should triple flights to Los Angeles, San Francisco, Detroit, Boston, New Orleans, etc.

And then he went bowling! There’s actually an on-line bowling game he could have used that’s quite realistic. After a bit of training, you can become certified as an e-bowler. Once again: an E-BOWLER.

I’ll be here all week.

Remember to tip your waitress!

Yah, yah. I DID try the veal. It was an OLD chicken…

But not bad, all things considered…